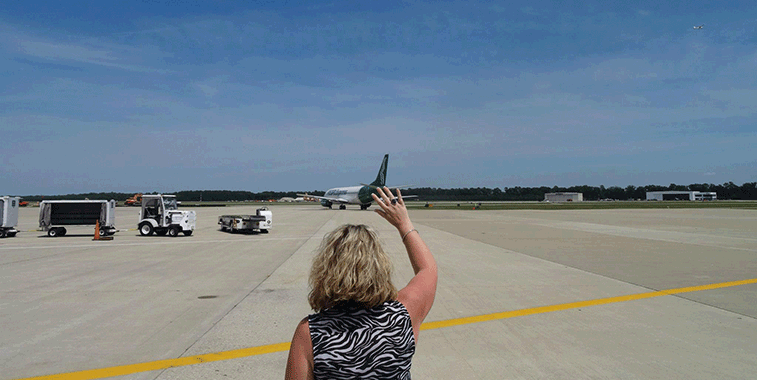 Byeee! (sniff). The departure of an inaugural flight is a big enough deal at the best of times (well we think so), but when you’re a start-up using a famous LCC pioneering brand from the 1980s, it’s an even bigger deal. The re-start of PEOPLExpress at Newport News on 30 June is therefore big…errrr…news.

Last week, Newport News/Williamsburg International Airport was merely a spoke in several bigger wheels — it had scheduled flights to Delta Air Lines’ hub in Atlanta, Frontier Airlines’ hub in Denver, US Airways’ hubs at Charlotte Douglas and Philadelphia, as well as twice-weekly flights to Orlando Sanford with Allegiant Air. This week it’s a different story, as the airport not only welcomes a new start-up based airline, but it opens its doors to one of the most iconic pioneer LCC brands – PEOPLExpress.

The reinvigorated LCC brand has two 150-seat 737-400s based at the Virginia airport, and initially plans to serve three destinations — namely Boston, Pittsburgh and New York Newark (operations to the latter sees the brand return to its former base). Other than its low cost business model, its name and its logo, the new PEOPLExpress has little connection to the original. The new CEO, Jeff Erickson, said the trademark on the name had been allowed to expire, and its new founders simply claimed it.

The first flights are to be operated under wet-lease by Vision Airlines, an established US charter and scheduled airline, as PEOPLExpress is actually still awaiting FAA certification. Erickson said certification is expected in about 18 months.

Spare capacity in the schedule – for now

The airline’s initial schedule offers just six weekly flights to Pittsburgh, daily flights to Boston, and twelve times weekly to New York Newark, with plenty of aircraft downtime in the start-up phase to be able to recover the schedule should anything untoward occur. All operating sectors are relatively short, with all three routes under 750 kilometres in length. The following table represents the full operational schedule from Newport News, which will be offered once St. Pete-Clearwater (PIE) starts on 29 August.

The remaining additional services will fill out the operational schedule of both aircraft more comprehensively when they commence – 23 July for West Palm Beach (PBI), 1 August for Atlanta (ATL) and 28 August for New Orleans (MSY). 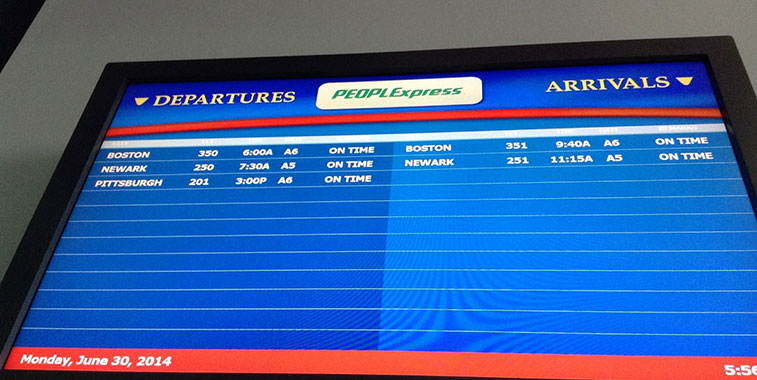 This board will be fuller in a few weeks’ time when flights to West Palm Beach (23 July), Atlanta (1 August), New Orleans (28 August) and St. Pete-Clearwater (29 August) will be added to PEOPLExpress’ flying programme.

The old PEOPLExpress created waves in the relatively uncharted territory of the embryonic LCC industry when it was first launched in 1981, with low-fare, no-frills flights featuring cash payment on board. The original PEOPLExpress was the first U.S. carrier modelled after the UK’s low cost Laker Airways, and was based out of Newark’s old North Terminal. It started out with domestic services only, before adding international flights from Newark to London Gatwick (as well as Montreal and Brussels) starting at $149 each way. Sodas were 50 cents and a snack pack of cheese, crackers and salami was $2. PEOPLExpress was also one of the first airlines to charge fliers for a single first checked bag, at $2 (now its $20, rising to $25 for a second, and $75 for a third).

Despite initial success, problems began with an over-ambitious expansion of the airline, including a spending spree on acquiring other airlines. Its no-frills philosophy also failed to win over fliers accustomed to a higher-end experience found on the carriers it had acquired, making its financial situation worse. In the end, some of its assets were sold off, and its remaining operations were absorbed into Continental Airlines (now merged into United Airlines) in 1987. 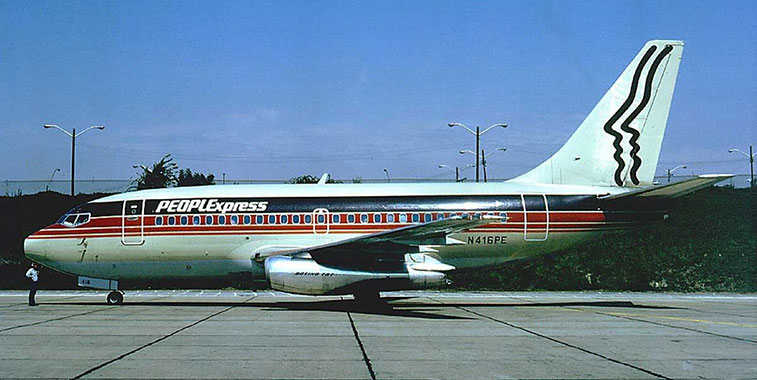 During the 1980s, the ‘old’ PEOPLExpress was based at New York Newark and was also a regular sight at London Gatwick, when the fledgling LCC launched transatlantic flights. Over-ambitious expansion plans forced its closure in 1987, when some of its assets were acquired by Continental Airlines — now another defunct airline brand.