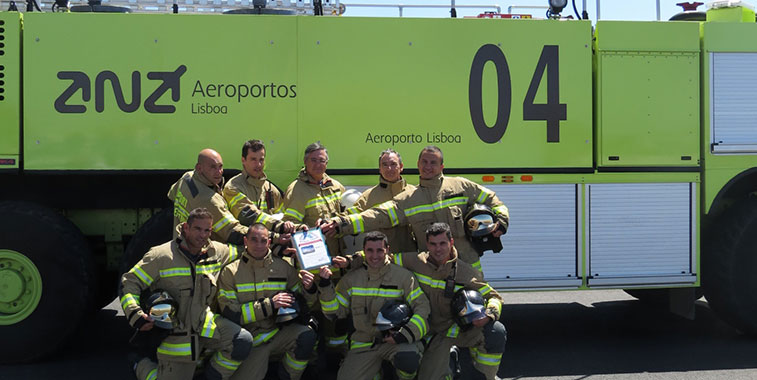 I’m pretty sure that no FTWA was arranged for the returning Portuguese football team, which crashed out of the World Cup despite high expectations. At least the firefighters at the capital city airport were able to restore a little national pride last week with their ‘Arch of Triumph’ win — especially as the competition is getting increasingly tougher.

With around 150 FTWAs already submitted so far this year, it is getting harder for global airports to make an impact on this ferociously competitive alternative airport marketing award. An average score is now just below 25 (24.84), whereas last year it was two points lower (22.97). This raising of standards is exemplified by this week’s ‘Arch of Triumph’ winner, a tasty little effort from the boys and girls at Frankfurt Airport. Its winning score of 36.6 secures it fourth spot on the 2014 leader board, yet if this FTWA had been submitted in last year’s competition – it would have won the overall annual prize by 0.4 points. Keep Monitoring! 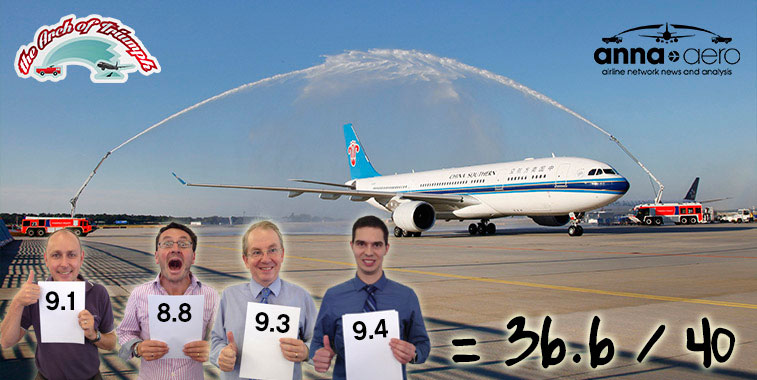 Unlike the German national football team, Frankfurt crushed its opposition this week.

Judge’s comments: Much like a fantastic route launch cake, it’s this type of FTWA that puts a spring in the step of anna.aero’s four esteemed judges. It’s that good, that last year this would have won the overall 2013 competition. Wunderbar!! 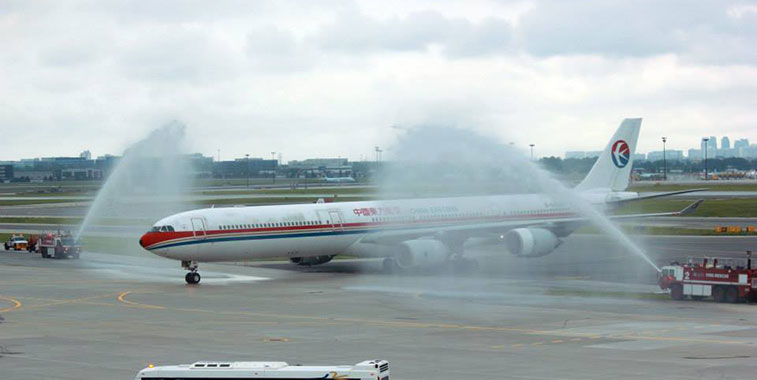 Nobody told the Toronto Pearson firefighters that an A340-600 was a wide-body aircraft.

Judge’s comments: The clue is in the name. Fire Truck Water ARCH. Not Fire Truck Water Wing Wash…which is precisely what the China Eastern aircraft is receiving from the Toronto Pearson firefighters. Unless a flock of Canada Geese had just flown over and deposited the remains of their lunch on the A340-600s wings of course. 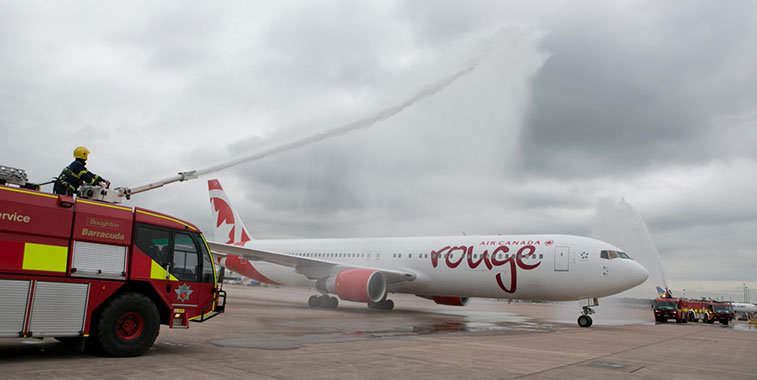 Grey skies scuppered the visual impact of this FTWA.

Judge’s comments: Much like the calls for goal-line technology which has been introduced at the World Cup for the first time, the marketing team at Manchester Airport must be leading the calls for FTWAs with coloured water to be permitted in this global competition, especially given the local weather at the north-west England airport. The obvious obstacle here would then be what colour to use, with 50% of staff wanting red (Manchester United) and 50% wanting blue (Manchester City). 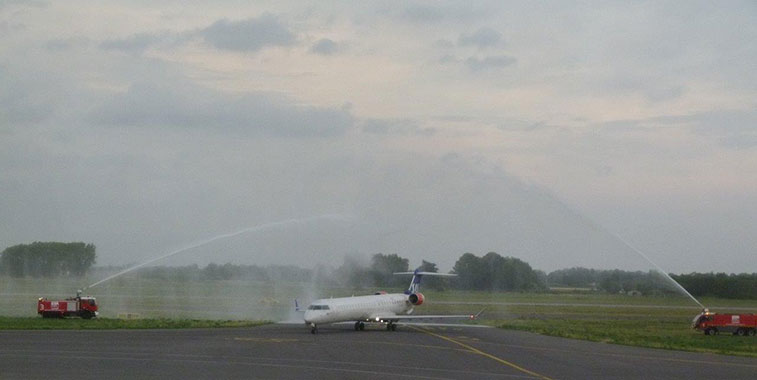 Judge’s comments: Textbook ‘Big Boy, Little Boy’ here, but then what do you expect when you pull out different tender equipment to perform such a precise piece of airport marketing as a FTWA. Next time, match up the kit better and you’ll score higher. 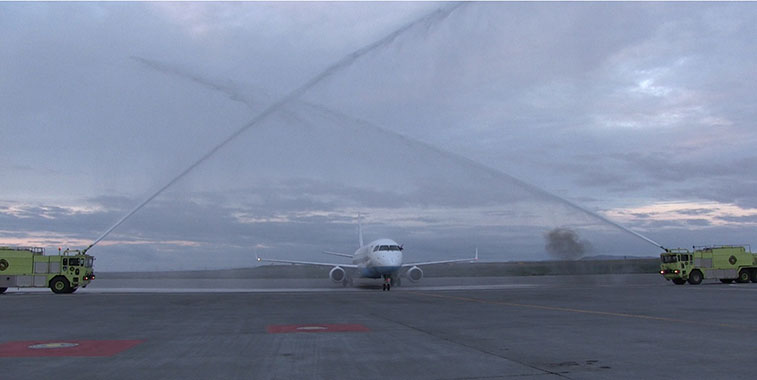 This is a night shot as the picture was taken at approximately 2330.

Judge’s comments: At this time of the year, it doesn’t really get dark in Iceland, so as you can expect, some strange things happen. FTWAs there are clearly no exception, as this example shows. It represents a re-enactment of an old Viking ceremony performed at this time of the year in homage to the old God of Sun – Sol or Sunna. If FTWAs were to be judged on this fact alone then of course it would score a perfect 10, but unfortunately for the firefighters at Reykjavik/Keflavik, it is judged according international airport marketing standards where ‘Leaping Dolphins’ are gods. 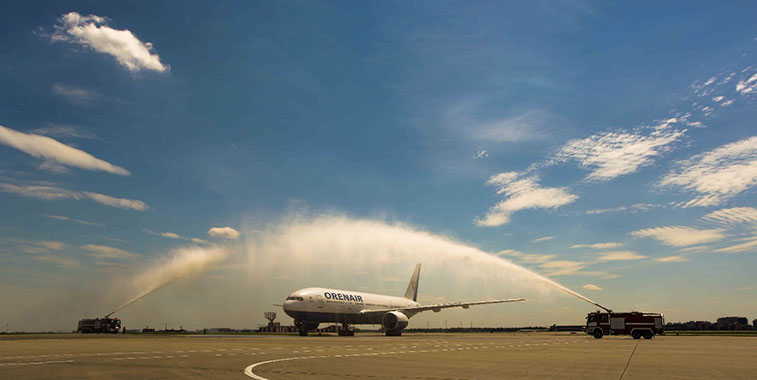 If only these water jets met above the aircraft fuselage rather than the starboard wing.

Judge’s comments: Another case of so close, yet so far. To deliver 80% of a perfect pair of ‘Leaping Dolphins’ is perhaps more irritating than completely goofing an FTWA. The firefighters at Moscow Sheremetyevo must be kicking themselves as they could have restored some national pride after being dumped out of the World Cup by Algeria last week. Great view of the FTWA from seat 7F.

Judge’s comments: We love the idea of internal shots of FTWAs, but we are purists when we judge these airport marketing masterpieces, so we like to see the whole picture. Fortunately, we have an external shot as well, but it doesn’t get much better. Extra points for internal shot and use of double water jet on the port side of the FTWA, but on the whole it’s a bit of a New Jersey car wreck.