Established in 1974 as a local airport within the territory of the former USSR, Riga Airport is the main gateway in Latvia, with the country having a population of around two million people. In fact, the airport is ranked as the busiest gateway in the Baltic States, above Vilnius, Tallinn and Kaunas. In addition, it serves as an operating base for the flag carrier airBaltic, as well as ULCC Wizz Air, with the latter having opened its 17th base at the airport on 19 June with services to Barcelona, Paris Beauvais and Doncaster Sheffield. 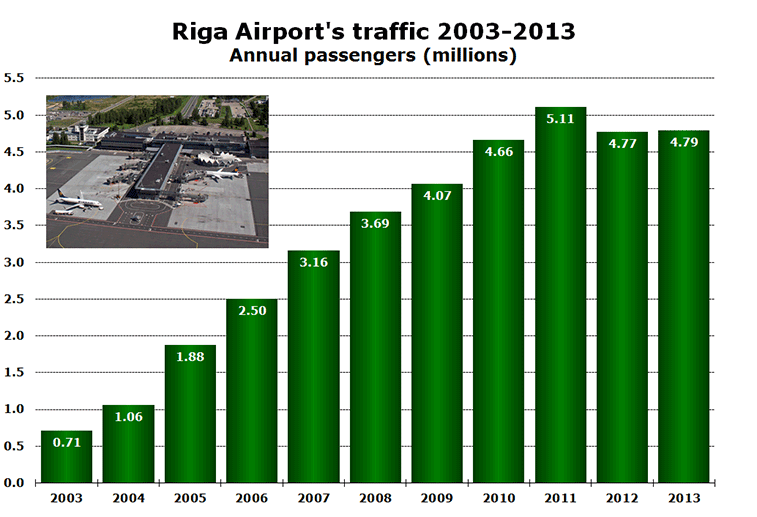 Since joining the EU in May 2004, Riga has benefited considerably from a huge increase in inbound tourists. Analysis of data taken from anna.aero’s European Airports Traffic Trends database reveals that passenger traffic at Riga has grown by 575% between 2003 and 2013. The airport handled 4.8 million passengers last year, a number that increased from the 700,000 recorded 11 years ago. Overall, Riga experienced growth until 2012, when a modest decrease of 6.7% was noted due to airBaltic’s restructuring plan that involved focusing more on profitability rather than growth. Last year, Riga consolidated its performance, as passengers increased by 0.4% and cargo went up 62%, but the passenger result is still some way off from its best annual traffic figure, achieved in 2011.

Riga ranked as “good” by SVID

Monthly traffic figures indicate that demand follows a typical northern European profile, with a peak in August when leisure demand is at its highest, and a dip in January, February, November and December. Entering Riga’s monthly passenger data for 2013 into anna.aero’s Seasonal Variation in Demand (SVID) calculator, the airport performs well, generating a score of 4.18, a “good rating”. Against its fellow airport peers from the Baltics, its 2013 score is marginally better than the busiest airport of Estonia, Tallinn (4.82 — good). However, when compared to Vilnius — the primary gateway to Lithuania — it performs worse than the 2.7 million facility, which scores 3.52, but still only a “good” result. Riga has entered the rankings at #7 spot, sharing this position with Basel, which also scored 4.18.

While a total of 14 carriers operate from Riga, the top 10 airlines command over 97% of weekly seats this August. Even though it reduced its weekly capacity by 7.4%, there is no surprise that airBaltic is still the dominant carrier at the airport, featuring a seat share of 62% and being almost five times higher than the second operator, Ryanair. Given its operational rationalisation, the flag carrier has removed a total of nine destinations from its Riga offering and started serving just six over the past 12 months, with the latest addition being Varna in Bulgaria on 24 June. This summer, airBaltic operates on a total of 52 routes from Riga, of which Helsinki, Tallinn and Vilnius are the most frequently flown destinations, being operated five times daily. 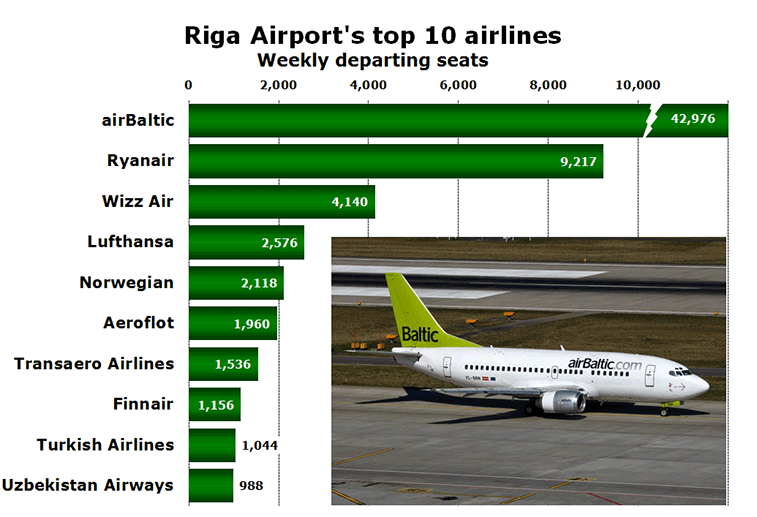 Weekly seat capacity for this summer has decreased slightly by 1.9%, with four of the top 10 operators recording growth, when comparing data from this August with the same week last year. As a result of opening its latest base at Riga this June, Wizz Air is classified as the fastest growing operator with an annual increase in weekly seats of 77% or a net growth of 1,800 seats. Therefore, the Hungarian low-fare operator has managed to grab 6% of weekly seats this summer, challenging both its Irish and Norwegian counterparts for LCC supremacy at the Latvian gateway. By comparison, with the exception of airBaltic that has trimmed a total of 3,424 weekly seats, Aeroflot and Ryanair posted the largest decreases (both -4.4%) of the top 10 airlines. On 19 June, Wizz Air celebrated the opening of its 17th base at Riga Airport, with the launch of services to Barcelona, Doncaster Sheffield and Paris Beauvais. The LCC is also planning to launch another route from the Latvian gateway on 31 August, with twice-weekly flights to Dortmund.