As part of its 2014 network expansion, Avianca has resumed operations on the 8,473-kilometre sector from Bogota to London Heathrow following a 13-year hiatus. The new airport pair will be served four times weekly, using the Star Alliance member’s A330-200s.

Established on 5 December 1919 under the SCADTA name (that means it is the oldest commercial carrier in Latin America and second oldest in western hemisphere according to its official website — answers on a postcard if you know who is the oldest carrier in the western hemisphere?), Avianca is the flag carrier of Colombia, headquartered in Bogota. Following the integration of TACA Airlines’ operations, Avianca has been growing impressively in recent years, as analysis of Innovata seat capacity indicates that around 400,000 weekly seats will be offered this July, 26% more since anna.aero last looked at this carrier two years ago. With a current fleet of 80 aircraft (according to Planespotters.net), the Star Alliance member is flying to a total of 54 destinations worldwide. In fact, the airline has recently resumed operations to its third destination within Europe following a 13-year hiatus, with four weekly flights to London Heathrow.

Avianca bosses Bogota with 64% of seats

Examination of traffic data indicates that Avianca handled almost 25 million passengers last year (including TACA’s passenger figures), representing an increase of 6.6% over 2012 figures. Nonetheless, 2013 was an excellent year for Avianca, as ASKs went up 6.1%, RPKs increased by 7.3% and the load factor grew by 1% to over 80%. The Star Alliance member is the clear market leader at Bogota, with a weekly seat share of 64% this summer. Furthermore, domestic traffic accounts for 75% of the seat capacity Avianca offers out of the Colombian capital, giving it a 69% share of domestic capacity at Bogota, above LAN Airlines, VivaColombia and Copa Airlines. Moreover, Avianca also dominates the international market out of Bogota, accounting for a 53% share of seat capacity, followed by Copa at only 10%. 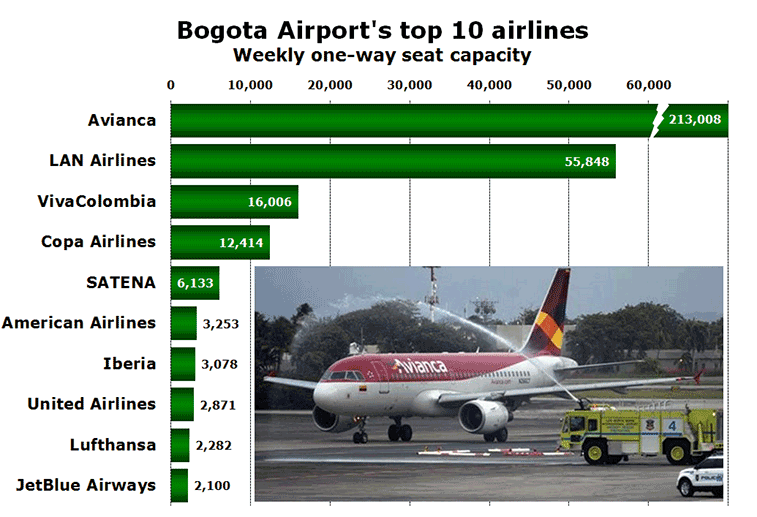 US is top international country market

According to Innovata schedule data for this August, Avianca operates services to a total of 19 countries within South America, North America and Europe. The airline’s top 10 country markets account for 85% of all weekly seats this summer, representing a 2.8% increase from last year’s figures. Furthermore, with a yearly increase of 4.3%, the US market still accounts for the majority of international seats (23%) in 2014, being served with a combined 96 weekly flights to Fort Lauderdale, New York JFK, Orlando, Miami, San Juan and Washington Dulles. Looking at this year’s top 10, Spain is the only country market (highlighted in the chart below) served by the Star Alliance member outside the Americas. From its Bogota hub, Avianca operates twice-daily services to Madrid and four times weekly flights to Barcelona. However, Madrid is also served from Cali and Medellin with thrice-weekly and twice-weekly services respectively. 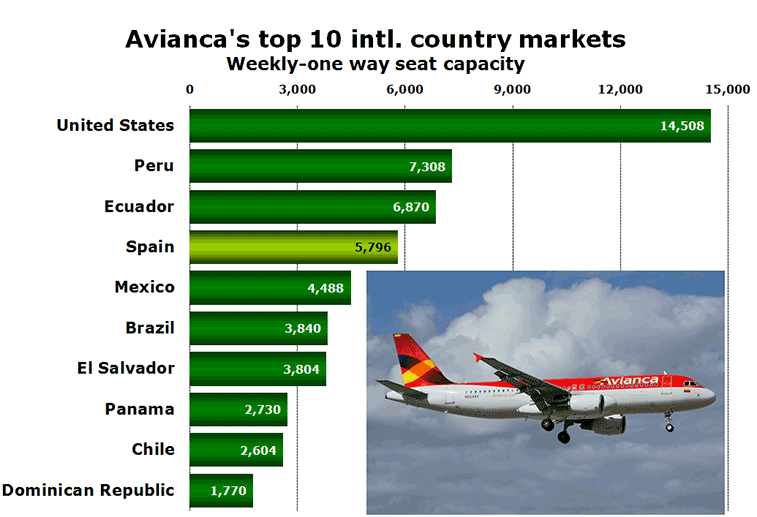 Avianca’s weekly international seat capacity experienced 19% growth this August when compared to data from the same week last year, with seven of the top 10 country markets growing, while Brazil saw its operations unchanged. El Salvador is not only a new entrant in this year’s graph, but also Avianca’s fastest growing country market, having increased by almost 470% or 3,132 weekly seats in the past 12 months. The carrier has expanded significantly its presence at San Salvador, with the addition of 19 weekly flights from Bogota as well as daily operations from Cali. By comparison, the only European market in this year’s graph — Spain, will witness the greatest capacity decrease (-8%).

Besides resuming operations to London Heathrow during the course of last week, Avianca plans to commence two new domestic airport pairs this month, to Villavicencio and Pereira with twice-daily and thrice-weekly flights respectively.