Spring Airlines launched flights from Osaka Kansai to Shanghai Pudong on 15 March with a 10-person ribbon-cutting ceremony. Given all the international publicity, you would be forgiven for thinking that there is only one airport in Osaka, but for a long periods over the last 10 years the domestic only airport, Itami, was bigger than Kansai.

Osaka is Japan’s third largest city (after Tokyo and Yokohama) and is served by two airports – Kansai International, which predominantly caters for international traffic (66% of available seats), and Itami International, which despite its name is wholly domestic. The latter tends to stay out of the limelight, as it does not attract the big global airline names, especially as the airport is served by just four airlines – All Nippon Airways, Ibex Airlines (which co-operates with ANA), Japan Air Commuter (a feeder for JAL) and Japan Airlines. So really you could say it is just served by Japan’s two main airlines.

Osaka’s two airports have been continually trading places, in terms of available capacity, over the last ten years. Earlier on in this period, during the years ending July 2004 and 2005, it was the domestic airport which led the way. However, between 2006 and 2009 it was the turn of the mainly international airport to hold capacity supremacy in Osaka. This was relatively short-lived, as Itami, perhaps due to its domestic traffic profile and therefore its enhanced ability to weather the global economic crisis better than Kansai, stole back the #1 spot, but come the year ending July 2012 the top spot changed hands again. Since that time, Kansai has not only maintained its first position, but it now offers significantly more seats (24%) than its domestic cousin. 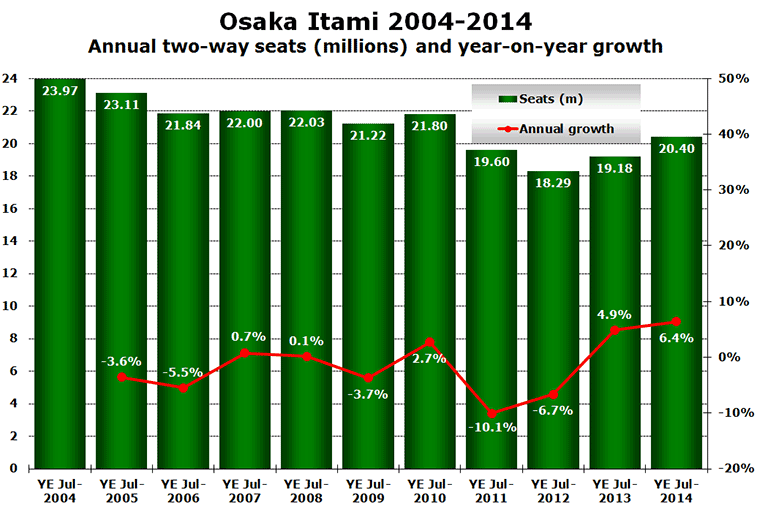 After a period of decline in terms of available seats in the years ending July 2011 and 2012, Itami seems to be back on a growth trajectory again, recording annual increases of 4.9% and 6.4% in the last two years. These positive figures are perhaps signalling a wider return to sustainable growth in what is widely considered a mature domestic market. Contributing to this recent spike in activity at Itami, ANA launched thrice-daily Q400 services to Aomori, while Ibex Airlines started daily CRJ flights to Niigata, both on 1 July.

Haneda by far the biggest route

Looking at Itami’s top 12 routes, it is of no surprise that the link to the capital is the dominant feature, with weekly seats to Tokyo Haneda ranking #1, and Tokyo Narita also sneaking in at #10. ANA commands 54% of weekly seats on Itami’s biggest route, with JAL just marginally behind on 46%. 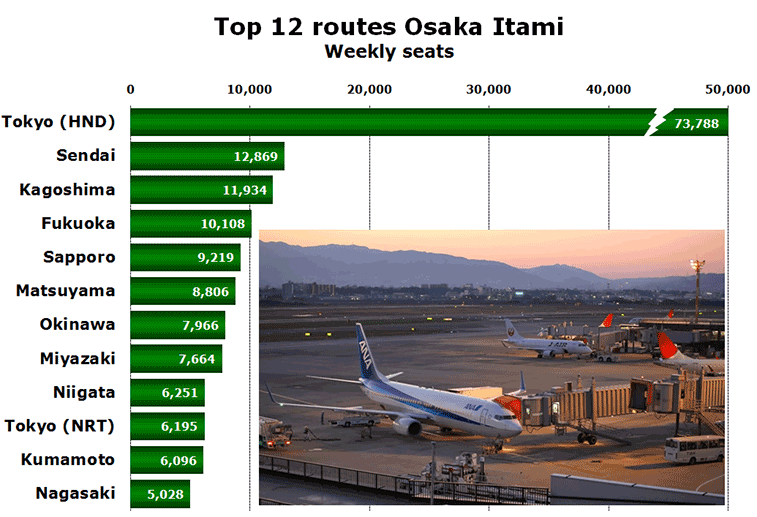 Indeed, Itami’s top 12 routes overshadow the 26 city network offered at the airport, controlling 86.9% of all weekly seats in July 2014. However, this share has fallen slightly, as the top 12 routes for the same week in 2013 had previously offered 87.8%.