First ever Heathrow FTWA for Avianca launch – but is it any good?? 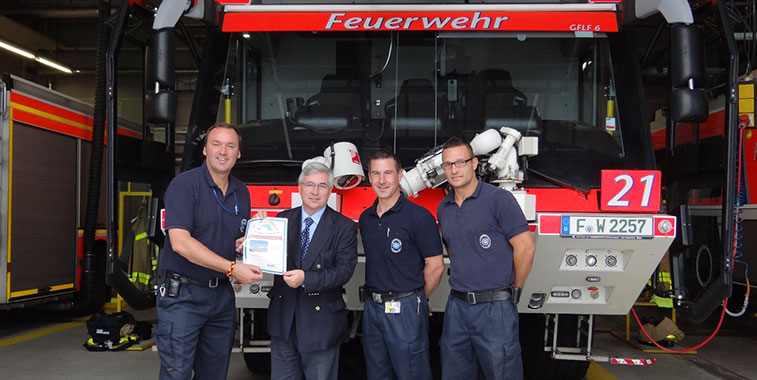 A bit like Brazil’s 90th minute goal against Germany in the obscenely one-sided World semi-final last night, Taipei Taoyuan’s win this week may have come all too late for the Asian region in this year’s global ‘Arch of Triumph’ competition. There hasn’t been an FTWA weekly winner outside of Europe for the last twelve weeks of competition. While Asia is in a clear second place with four wins in 2014, Europe with 15 (68% of total week) wins has perhaps already achieved an unassailable lead. However, with around 20 weeks of competition left in 2014, there is still time for one region to mount an assault on the regional table. Keep Monitoring (Asia, North America and Middle East)! 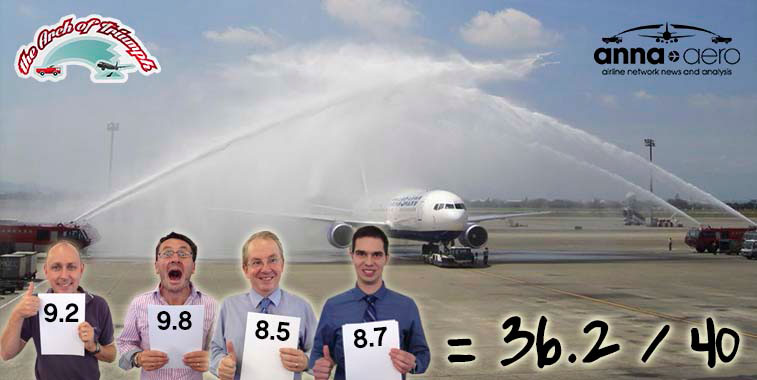 No fair – using a tug to ensure the aircraft hits the centre of the arch contravenes FTWA rule 2.11b, subsection iii.

Judge’s comments: You wait weeks for a four tender FTWA then you get two in the same week. This one certainly has the edge over the effort from Khon Kaen, however the use of a tug to ensure the aircraft hits the centreline has stopped this from being a world-beater. 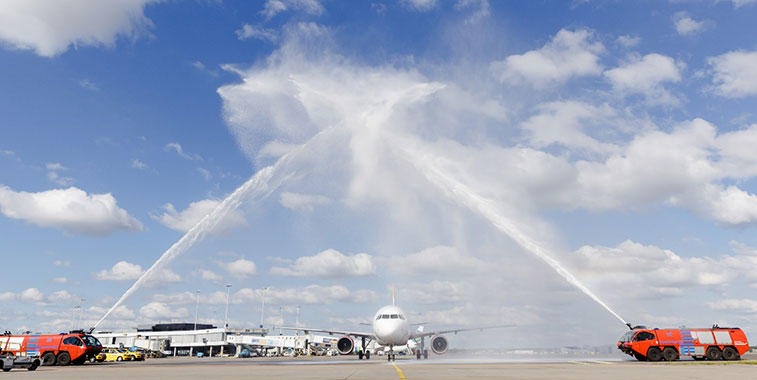 A fine piece of FTWA architecture, but its not an arch.

Judge’s comments: We hate to get all technical here, but if the angle on those water jets had been reduced by 8.84 degrees each, then this would have been a fine FTWA. Are those things not programmable? Surely by now some clever airport marketing executive or chief fire officer must have worked out the ideal angle to satisfy our exacting tastes? 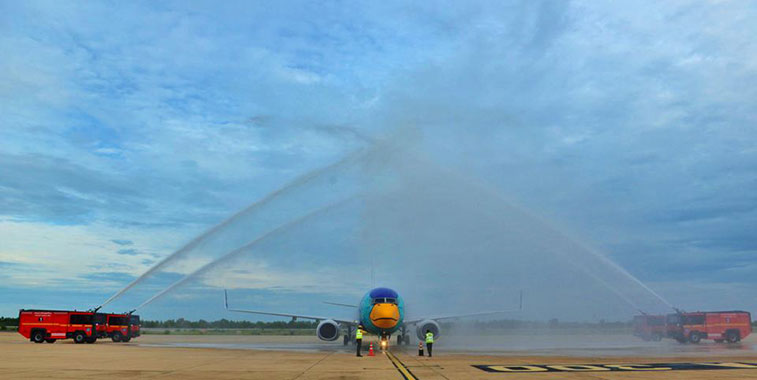 A four tender arch always heightens the emotions amongst the judges.

Judge’s comments: Four tender arches can go only one of two ways…total disaster or airport marketing masterpiece. Fortunately this is closer to the latter. However, there is a slight ‘Tobleroning’ going on with this one which has detracted from it securing a really high score. 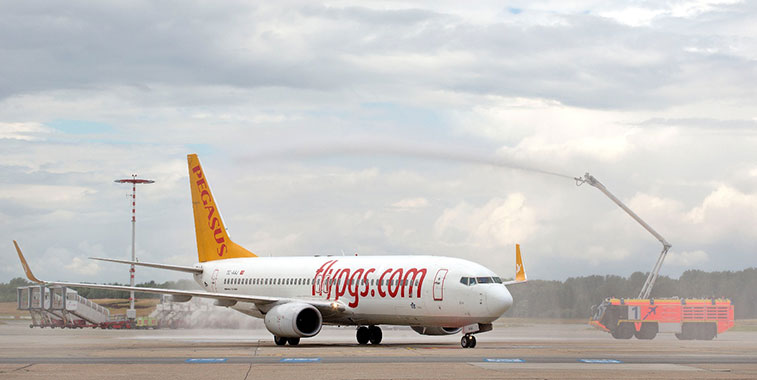 Timing in this business is everything, something the photographer at Hamburg didn’t possess.

Judge’s comments: You can have all the top end fire kit, but if the photographer is incorrectly positioned or even worse, takes the picture about 30 seconds too late, weeks of planning in the marketing department can go up in smoke (good job there are firefighters on hand to sort that out). Not a great result when you have a new airline flying to your airport. 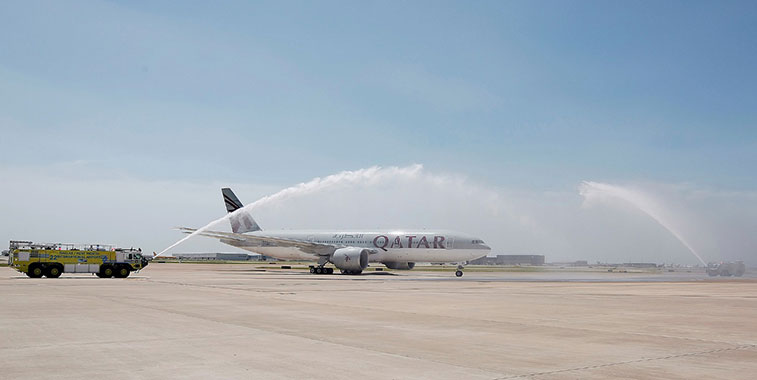 Everything is far apart in Texas – even the FTWAs.

Judge’s comments: There are a pair of ‘Leaping Dolphins’ in this FTWA from Dallas/Fort Worth it’s just a shame that they didn’t get to meet. Although when you know that Al Baker is on board it’s probably best not to prang one of his planes with an errant water jet. Although with ten new routes started already in 2014 you would guess that the Qatar Airways CEO knows the difference between a good and bad FTWA. 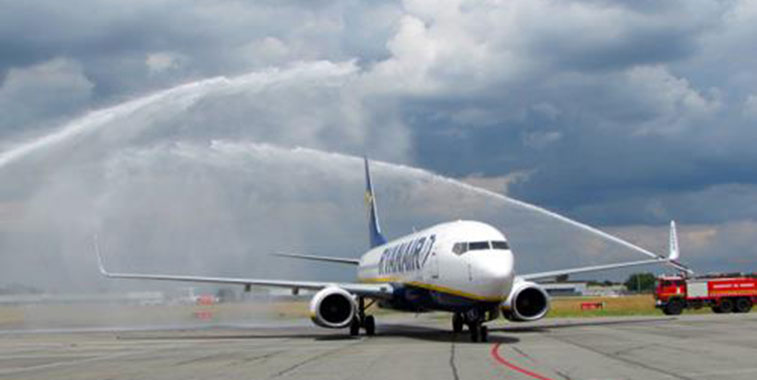 With this type of shot, we’re never sure who or what has provided the left-hand side of this arch.

Judge’s comments: It’s nice to see that ‘Gangnam Style’ is still alive and well in Brittany it would seem – well at least in terms of FTWA examples anyway. That reminds me, I must talk to his agent about the outstanding payments Psy needs to make to anna.aero for using our FTWA style as inspiration for his over-played global hit. 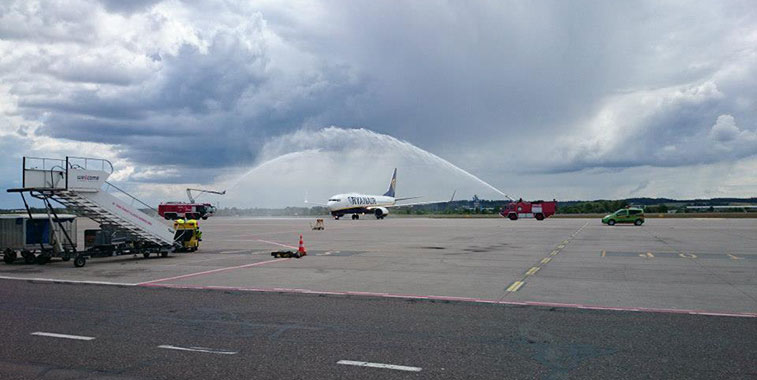 Judge’s comments: Clearly the photographer had not passed his airport Green Cross Code badge as he/she was not allowed to cross the service road at the head of these stands at Gdansk. Shame really, as we might have got an FTWA with a few less traffic cones on view. 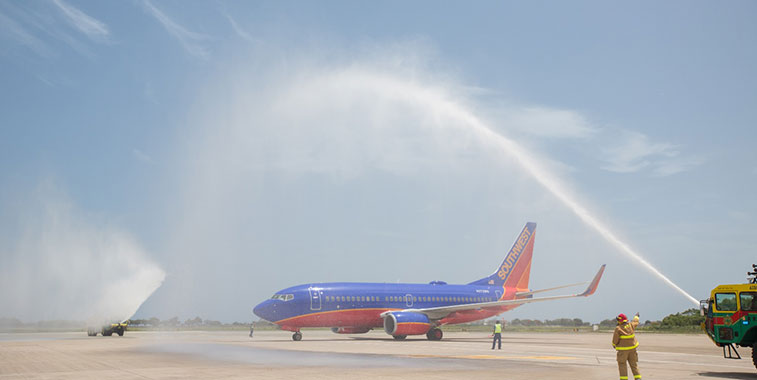 This FTWA is more nah man, than yeah man.

Judge’s comments: As they see the Southwest aircraft approaching the firefighter in the foreground of this shot is trying to attract the attention of his colleagues in the other fire truck and shouting, “Aim over here.” But when realising that they were never going to join in the middle must have then said something along the lines of “Ah stuff it Brian, just try and do the arch on your own…” given the complex geometry of the water jet coming from the closet tender. 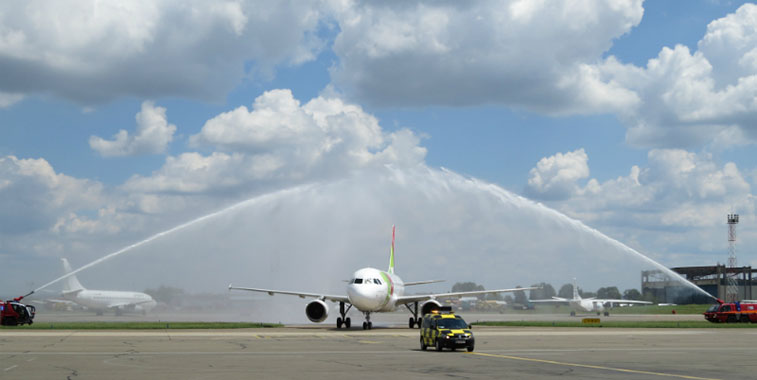 This lot has form. Belgrade Airport won in Week 1 of the 2014 competition with a solid effort rather than a great one (scoring 30.5). This one is certainly an improvement, and if they get a third go at creating an FTWA this year the airport’s firefighters could make a splash at the top of the leader board. Lovely stuff.

Judge’s comments: This lot has form. Belgrade Airport won in Week 1 of the 2014 competition with a solid effort rather than a great one (scoring 30.5). This one is certainly an improvement, and if they get a third go at creating an FTWA this year the airport’s firefighters could make a splash at the top of the leader board. Lovely stuff.

An unbalanced FTWA from Bogota.

Judge’s comments: In our day jobs, when not scoring airports on their inaugural flight ceremonies, we strive for precision and accuracy – we’re a bit nerdy like that. Being a bit geeky then, we love symmetry and balance rather than randomness and creative flair that are the watchwords of the airport marketeer. So you can just imagine how this FTWA was received in the anna.aero office this week – well it was a bit like wearing some ill-fitting underwear – we just couldn’t sit comfortably all day. 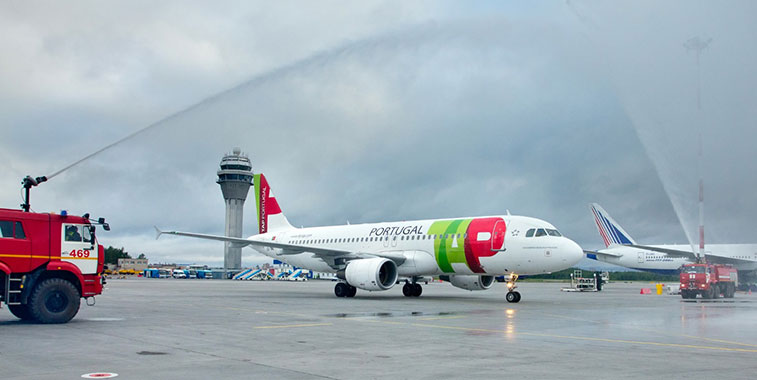 Five FTWAs in one week – TAP Portugal now has the cleanest aircraft fleet in the world.

Judge’s comments: Fire truck 469 – how big is Pulkovo? Or is that subliminal messaging by the airport’s marketing team in terms of what score we should award? Whatever it is, we can’t be bought…unless of course it’s with Krispy Kreme doughnuts! 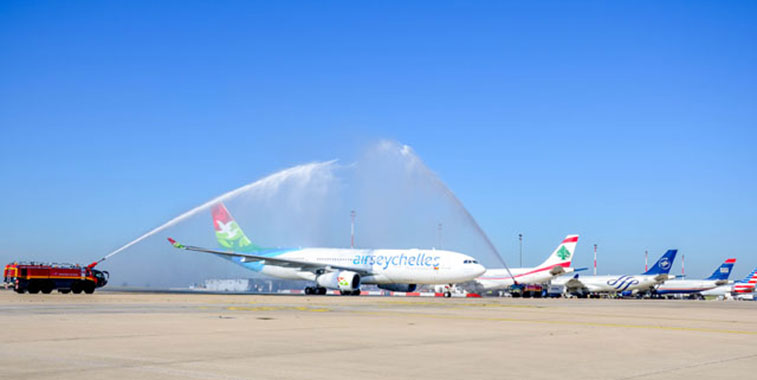 Five FTWAs in one week – TAP Portugal now has the cleanest aircraft fleet in the world.

Judge’s comments: Look at all that heavy metal in the background of this picture, on second thoughts don’t, because that is exactly what this clever photographer is trying to do, having seen the CDG firefighters FTWA practice runs earlier in the week, to draw our attention away from an average effort. However, you need to get up earlier in the morning to fool four FTWA judges of our calibre Monsieur! 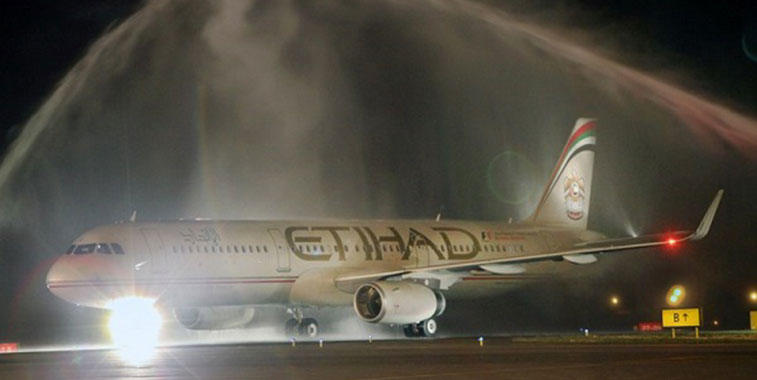 Judge’s comments: You wait all that time for your first MEB3 carrier service and then you fluff the FTWA?! All that hard marketing effort disappears in an instant due to an over-zealous cropping of the image of the most important new service you have ever attracted. Oh dear. 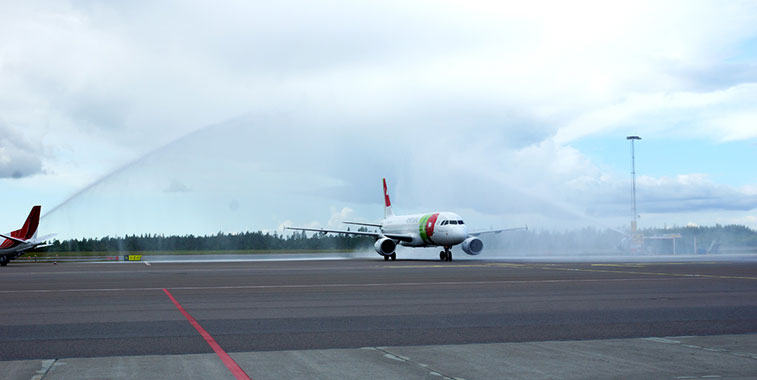 Has that A319 backfired or did someone let off a smoke bomb?

Judge’s comments: We’ve had airbridges fitted with water cannons in the past and now Gothenburg has one fitted to the tailfin of a Golden Air (now Braathens Regional) Saab 2000 (possibly Saab 340?). Whatever next? A water-emitting baggage trolley? A pimped-up cargo dolly fitted with a water cannon? Really?? 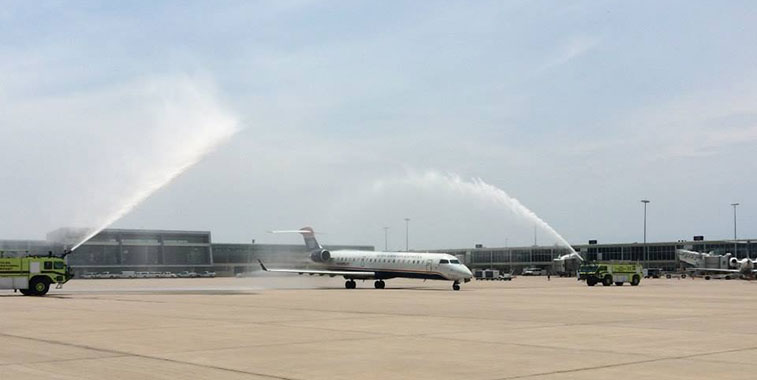 24 hours from Tulsa – following this FTWA the airport’s firefighters might want to hide a bit further away than that.

Judge’s comments: “Dearest darling; I had to write to say that I won’t be home anymore; For something happened to me; While I was driving home and I’m not the same any more.” The opening lines from ‘24 hours from Tulsa’ by Gene Pitney, but they could equally be from any of the firefighters involved in this FTWA, who on their journey home that evening realised that they will be mentally scarred forever. 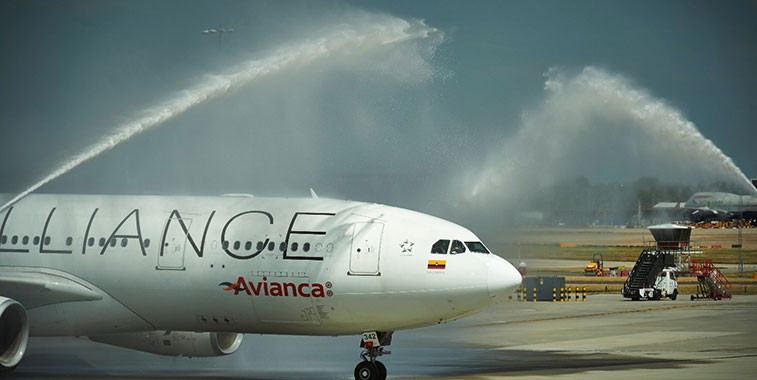 Judge’s comments: This is fire ever effort from London Heathrow, so some leniency can be used in the judging of this FTWA. However, the anna.aero judges have low boredom thresholds and high expectations from big airports, so we might not be as forgiving next time round. So we’ll leave it with simply — ‘Must do better next time’. 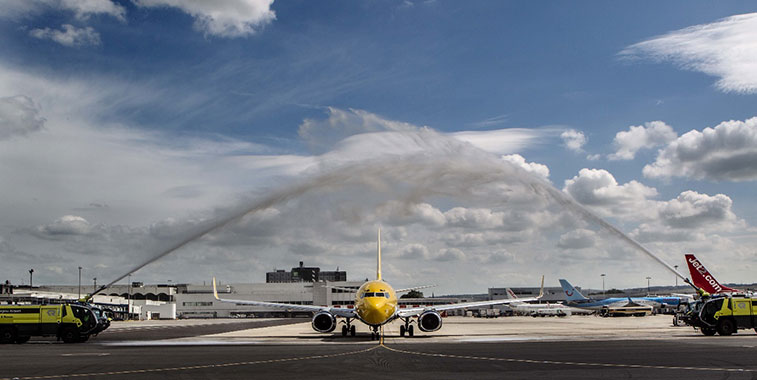 First ever FTWA received from Glasgow – not a bad effort.

Judge’s comments: When you compare this to the effort received from Heathrow this week, who also sent anna.aero their first FTWA since the start of the ‘Arch of Triumph competition, my money would certainly be on the Scottish firefighters in terms of challenging the leader board next time around. Not a bad effort for a rookie. 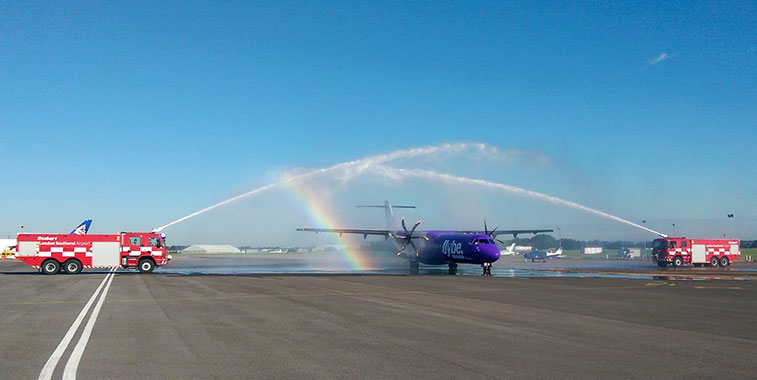 Judge’s comments: This FTWA gives you a view of the exact opposite of the more common ‘Tobleroning’ style. Firefighters guilty of ‘Creping’ (or ‘Pancaking’) an FTWA must go back to the classroom for some basic geometry lessons. Not the sort of display we expect from a station that has already hoisted a weekly title – even the rainbow can’t rescue it. 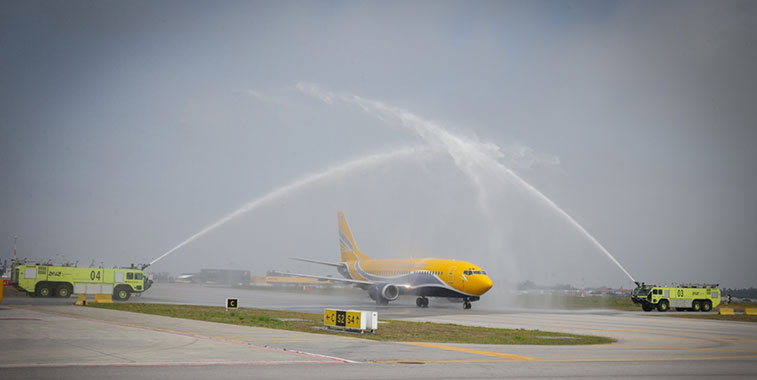 Judge’s comments: This new route FTWA scores extra points just for the fact that the weekly service is utilising a mail aircraft (the clue is in the name of the airline – Europe Airpost) during the day that would be otherwise sat around being a perch for birds. Great utilisation of an asset which must be applauded. Let’s just hope that the cabin crew don’t get confused between the night time mail bags and the day time self-loading cargo. 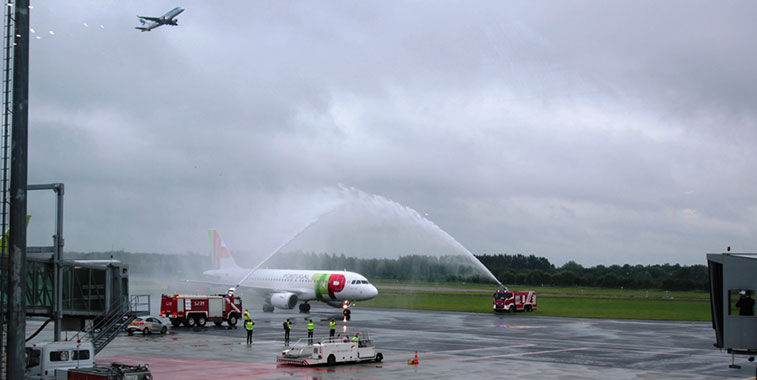 We’re still waiting for the aerial shot of this FTWA.

Judge’s comments: Obviously the photographer taking this picture didn’t want to get his/her equipment wet, unlike the more hardy airport employees out on the apron. As a result, we get another picture of another collection of various items of airport equipment in the foreground. 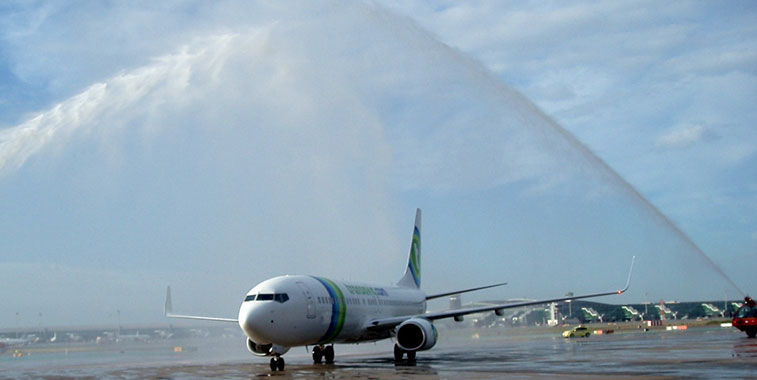 Missing. One fire tender. If anyone finds it can they please reply to Barcelona Airport.

Judge’s comments: Either there was a lot of rain before the arrival of the transavia.com France inaugural flight arrived or there had been a lot of practicing beforehand. If it was the latter you might have expected a more polished effort from Aena’s second biggest airport.