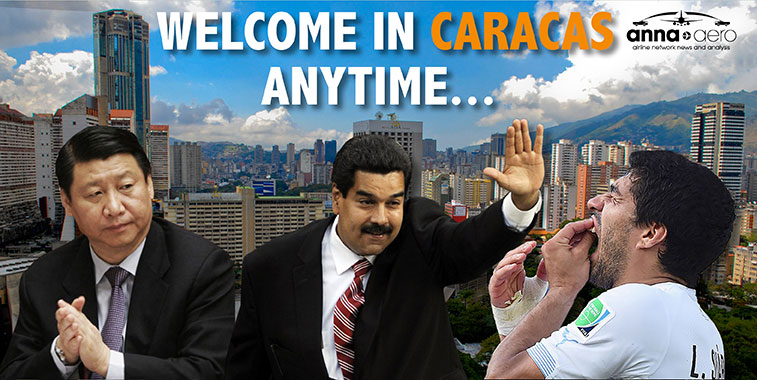 Caracas compadres. Luis Suarez will always be welcome in Caracas, as Venezuelan President Nicolás Maduro was one of the few people outside of Uruguay to come out in support of the disgraced Uruguayan football star and now Barcelona player. Maybe they could hook-up with Chinese President Xi Jinping, who is expected to meet Maduro during his South American tour this month.

Venezuela has an estimated population close to 30 million and considerable wealth thanks to its status as one of the world’s key oil producing nations. However, the country’s inbound seat capacity is being slashed in the wake of a biting foreign currency crunch currently affecting Venezuela. The country’s main airport, Simón Bolívar International Airport, is located around 20 kilometres from Caracas and currently handles around 12 million passengers per year (15% up from 2012), making it Latin America’s eighth busiest airport, and number 127 in the world.

According to Innovata Schedule data, Venezuela has 26 airports with scheduled services — a huge jump from the 14 we reported back in 2011 — with Caracas accounting for 46% of all scheduled flights and almost 50% of scheduled seat capacity. Backing up the regional service explosion across the country, Caracas’ share of these figures has fallen sharply since our last review. After Caracas, the country’s next biggest airports are still Porlamar (12% of weekly flights; 12% of weekly seats), Maracaibo (7.2%; 7.7%) and Barcelona (6.7%; 7.1%), however these last two have switched positions over the last three years. 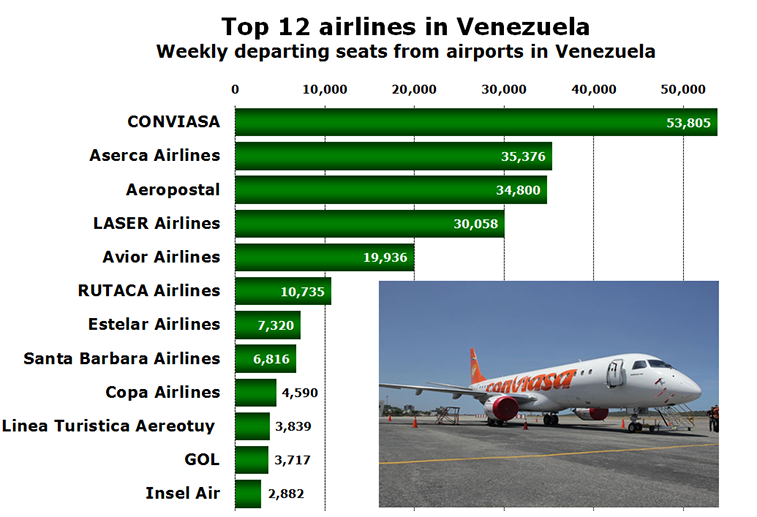 Venezuela has several locally-based airlines, the biggest of which is now CONVIASA, which began flying in 2003 as a replacement for Viasa (the national flag carrier that collapsed in 1997). It has a varied fleet of around 30 aircraft, with its fleet mainstay being the E190, of which it operates 14 of the type. Around 90% of its weekly seats operate to and from Venezuelan destinations, and its only long-haul operation is a twice-weekly, 259-seat 767-200 service to Madrid (which is operated by US charter carrier Vision Airlines).

CONVIASA has replaced Aserca Airlines as the #1 carrier in Venezuela since we last reviewed the market in 2011. Aserca operates a fleet of over 20 MD-80s and DC-9s, mostly on domestic routes. Currently its only international service is its six times weekly MD-80 route to Aruba.

TAP Portugal is the country’s biggest European carrier (#15 overall), marginally ahead of Air Europa (#16). Lufthansa, which was in the top 12 airlines last time round, has now dropped to 21st place, with over 1,300 weekly seats less than the 2,415 it posted in our last analysis. It currently flies five times weekly A330-300 services from its Frankfurt hub to Caracas, however in a recently announced schedule change, from 1 August 2014 the airline will cut this service to thrice-weekly, as the Venezuelan currency crisis takes its toll on air services. Similarly, Iberia has fallen out of the top 12 and now resides in the 18th spot. It also flies five times weekly A330-300s to Caracas, but obviously from its Madrid hub.

All three US majors — American Airlines, Delta Air Lines and United Airlines — operate to Venezuela, although the oneworld carrier’s 10 weekly 737-800 flights from Miami (eight weekly to Caracas, twice-weekly Maracaibo), makes its almost double the size of United in the market place, which offers a daily Houston Intercontinental to Caracas service with its 737-700s (however in another recent schedule announcement, from mid-September this will be reduced to four times weekly). Delta too offers a connection to a single hub, with daily 737-700 flights to the capital from Atlanta, but from August 1 this will be reduced to just weekly.