Glasgow recorded 7.4 million passengers in 2013; Ryanair opens base #69 in October 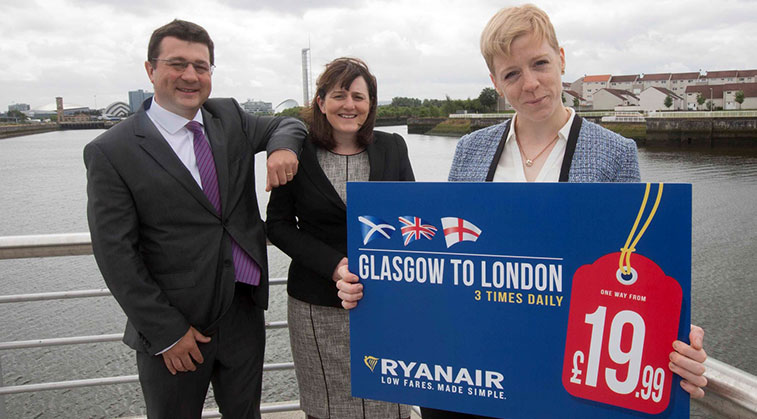 On 3 July, Ryanair announced opening its 69th base at Glasgow Airport, with the addition of thrice-daily operations to London Stansted and Dublin. The Irish LCC will bring an additional 850,000 passengers per year to the Scottish gateway.

Having a population of around 600,000, the city of Glasgow is served by both Glasgow International and Glasgow Prestwick, with the former being the main gateway for the largest city in Scotland. In fact, the airport is classified as the eighth busiest gateway in the UK, below London Luton and Birmingham, according to 2013 traffic figures.

Examination of Innovata schedule data for this August indicates that the airport’s summer programme includes over 76 non-stop services operated to 22 countries within Europe, North America and Middle East. Commenting on the airport’s network gaps, Paul White, Business Development Manager, Glasgow Airport, said: “Within the destinations that are currently unserved from Glasgow and would support a mix of both business and leisure traffic, are Brussels and Prague along with cities in Scandinavia, Italy, Germany and France.” He continued: “We’ve enjoyed a great deal of success in strengthening our route network and recent highlights have included Marrakech [easyJet and Thomson Airways], Dubrovnik [Thomson] and Las Vegas [Thomas Cook Airlines]. We will continue to expand our leisure network by adding more new destinations.”

Operated and owned by Heathrow Airport Holdings (formerly BAA), Glasgow serves as a base for Flybe, easyJet, Jet2.com, Thomas Cook Airlines and Thomson. Nonetheless, starting this October, Ryanair is opening its 69th base at the Scottish airport, where it will base one 737-800, bringing an additional 850,000 passengers per year. Furthermore, the Irish ULCC will commence thrice-daily flights to London Stansted and Dublin, with the latter having been switched from Prestwick. Overall, Ryanair will be operating a total of 55 weekly flights from Glasgow, including services on seven winter routes, namely Bydgoszcz, Derry, Riga, Warsaw Modlin and Wroclaw. Commenting on Ryanair’s new base, Francois Bourienne, Commercial Director, Glasgow Airport, said: “We are delighted to welcome Ryanair to Glasgow. Not only will it complement our already strong mix of airlines, it will provide our customers with even greater choice. This announcement underlines our commitment to enhancing our route network and delivering the services our customers demand.” 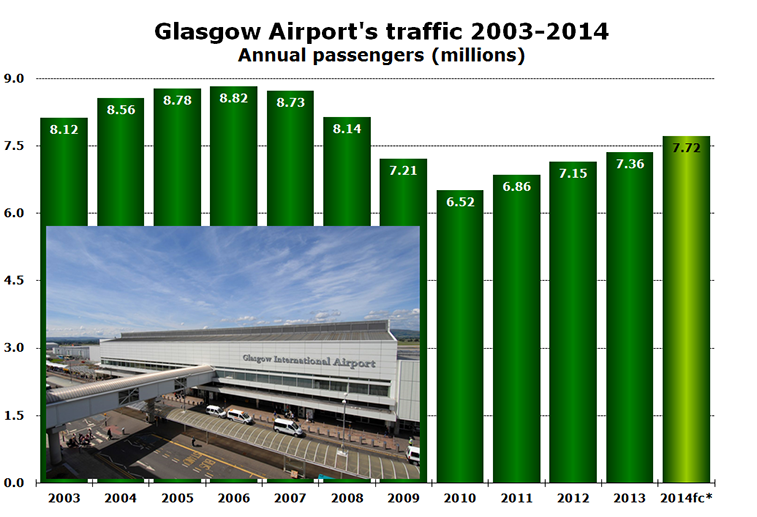 The 2007 terrorist attack, along with the global financial crisis, had a major impact on passenger flows to and from Glasgow in the 2008-2010 timeframe, after traffic peaked in 2006 at 8.8 million. As a result, the airport’s traffic posted a significant decrease of 25% in 2010 when compared to 2007. Since then, Glasgow has been consolidating its annual passenger performance, reaching 7.4 million last year (representing an increase of 2.9% over 2012 figures). In the first five months of 2014, for which traffic data is already available, the airport noted an increase of 4.9% when compared to the corresponding period of 2013, with 2.7 million passengers achieved until end-May. If the airport continues on this growth trajectory, it will achieve over 7.7 million passengers in 2014, based on anna.aero forecast.

Monthly traffic figures indicate that demand follows a typical seasonal profile, with July being twice as busy as January, the month where the airport records the lowest traffic figure. Entering Glasgow’s monthly passenger data for 2013 into anna.aero’s Seasonal Variation in Demand (SVID) calculator, the airport performs well, generating a score of 6.74, a “good rating”. Against its fellow Scottish peers, its 2013 score is significantly better than city’s second airport at Prestwick (16.28 — poor). On the other hand, when compared to Edinburgh — the UK’s sixth busiest airport — it performs worse than the 9.8 million facility, which scores 5.81 (but still a “good” result). Overall, Glasgow has entered the rankings at #27 out of 35 airports, between Cork (6.73) and Iasi (7.88).

easyJet dominates with 21% of seats

The top 12 airlines serving Glasgow account for over 95% of all weekly seats this August, while a total of 22 carriers operate from the Scottish gateway. Even though it reduced its weekly capacity by 5.5%, easyJet is still the biggest operator, as it controls 21% and 17% of weekly seats and flights respectively. The UK low-cost carrier operates a total 16 routes from Glasgow this summer, with Belfast and London Luton being the most frequently flown destinations with 20 weekly flights. 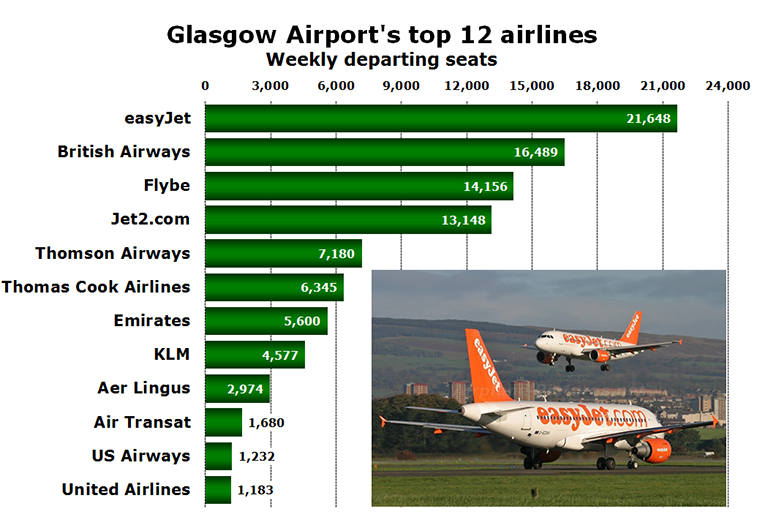 Weekly seat capacity for this summer increased slightly by 2.8%, with five of the top dozen carriers recording growth (when comparing data from this August with the same week last year). Ranking fourth, Jet2.com is the fastest growing operator with an annual increase in weekly capacity of 29% or 2,959 additional seats, coming as a result of commencing services to Kerkyra, Madeira, Fuerteventura, Reus and Zakinthos over recent months. By comparison, Flybe has trimmed a total of 912 weekly seats (-6.1%) from its summer schedule following the withdrawal of operations to Cardiff, Newquay and Shannon. 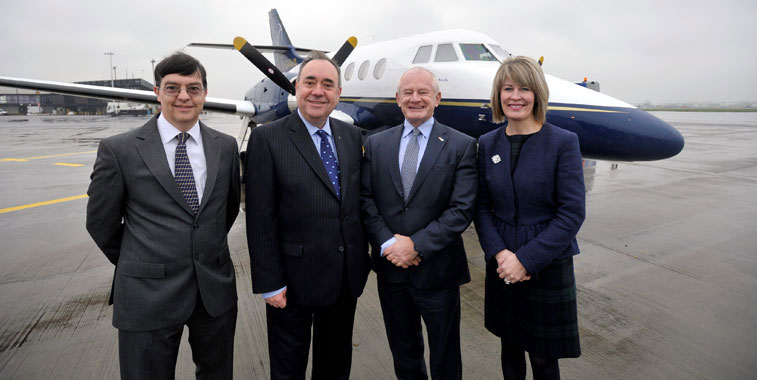 On 31 March, Citywing resumed links between Glasgow and the Isle of Man by launching 10 weekly flights using a Jetstream 31. The 200-kilometre sector was previously served by Flybe, who terminated its services at the end of last June.