For the last three years, the domestic/international split of Jetstar Airways’ weekly seats has remained around 80/20. Currently the airline flies 48 domestic routes, including the new Gold Coast to Mackay service which started earlier this month, and 27 international routes.

Like several other LCCs we have featured recently – Wizz Air and Vueling – Melbourne-based Jetstar Airways is now in its 11th year of operations. Since its inception in May 2004, the wholly-owned Qantas subsidiary has spawned several sub-brands — Jetstar Asia (launched in 2004 as Valuair), Jetstar Pacific (launched in 2008 as Pacific Airlines), Jetstar Japan (launched in 2012) and Jetstar Hong Kong (to be launched) — but it is Jetstar Airways itself that remains the backbone of this airline group, offering 63% of its weekly seats. Jetstar Japan takes the largest slice of the remainder of the group’s weekly seats with 16%, followed by Jetstar Asia (13%) and finally Jetstar Pacific (8%).

Since we last reviewed Jetstar Airways’ operations in December 2010, the airline’s rapid international growth has slowed down before reaching a plateau over the last three years. When comparing weekly schedules for the week commencing 14 July over the last ten years, the international component of the LCC’s weekly seats is now averaging around 20%. 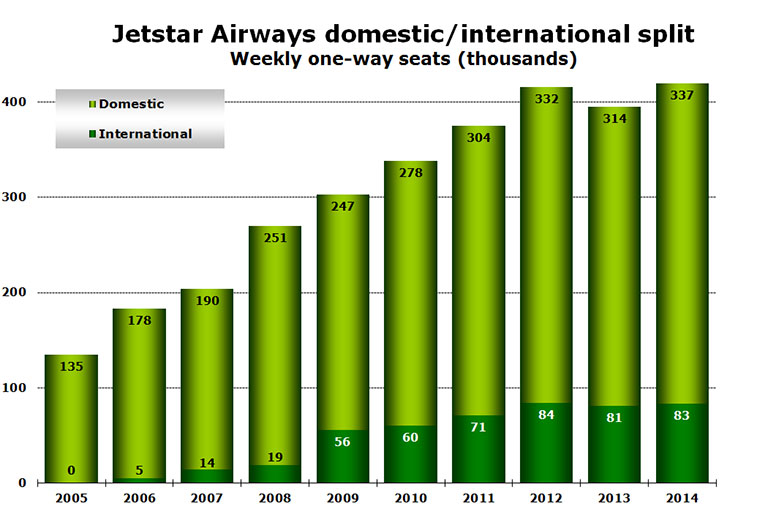 Jetstar now operates up to 50 weekly return services (up from 47) from Australia to Auckland, Christchurch and Queenstown (no change). The LCC’s share (weekly seats) of the domestic New Zealand market is now 16% (down from around 20%), with up to 119 weekly (down from 138) return flights between Auckland, Christchurch, Dunedin, Wellington and Queenstown. A fleet of nine A320s are based in New Zealand. 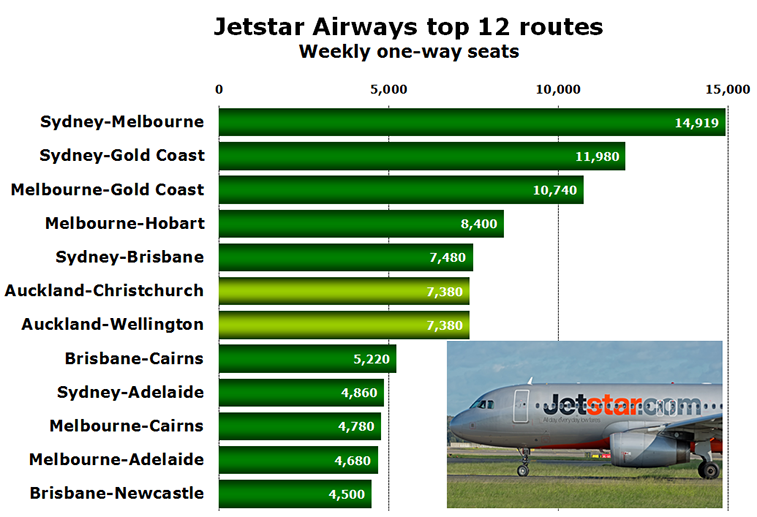 Countries served apart from Australia and New Zealand are Fiji, Indonesia, Japan, Singapore, Thailand and the US (Honolulu), but no longer to Vietnam, with services to Ho Chi Minh City terminated in March 2012. Its US capacity will increase marginally starting 15 December, when the airline plans to launch a thrice-weekly A330 service from Brisbane to Honolulu, adding to its existing six times weekly Sydney, and twice-weekly Melbourne operations.