Last August, Kenya Airways added its second destination in Malawi, with thrice-weekly flights from its Nairobi hub. The SkyTeam member is also serving the Malawian market with services to Lilongwe from both Lusaka (10 times weekly) and Nairobi (five times weekly).

Launched in January 1977, following the breakup of the East African Community and the subsequent disintegration of East African Airways, Kenya Airways is the flag carrier of Kenya, headquartered in Nairobi. The SkyTeam member, in which KLM and the Kenyan government have a 26.7% and a 29.8% stake respectively, has established itself as the fifth largest operator in Africa, with nearly 4.2% of weekly seats (according to Innovata schedule data for week commencing 19 August 2014), behind South African Airways, EGYPTAIR, Royal Air Maroc and Ethiopian Airlines. Operating a fleet of 47 units (including both Boeing and Embraer aircraft types), Kenya Airways has been growing without interruption in recent years, as analysis of Innovata seat capacity indicates that around 135,000 weekly seats will be offered this August, and 33% more since anna.aero last looked at this carrier five years ago.

Examination of Kenya Airways’ traffic data indicates that the airline carried 3.7 million passengers last year, representing a modest increase of only 1.1% when compared to 2012 figures. Even though its load factor went down by 3.1%, 2013 was not a bad year for the airline, as it managed to grow its total revenue by 6% to $1.2 billion as well as its ASKs by 1.8%. 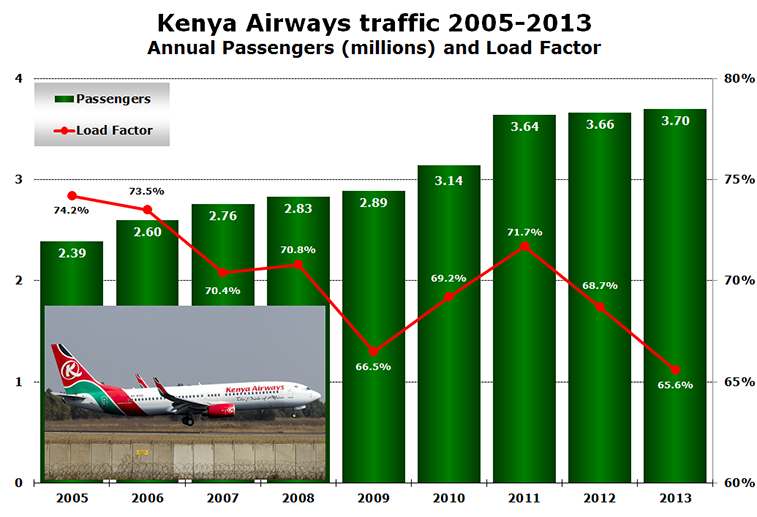 Overall, looking at passenger development between 2005 and 2013, Kenya Airways’ traffic has soared, noting 55% growth over this timeframe, while its load factors have fluctuated between 65% and 74%.

Nairobi-Mombasa is #1 route by seats

According to Innovata schedule data for this August, the carrier operates 116 non-stop services to a total of 48 countries in Africa, Europe, Middle East and Asia. Kenya Airways’ main base is at Nairobi, from where it operates a network of 37 routes this summer, of which Mombasa is the most frequently flown destination, being operated nine times daily. In fact, the SkyTeam member is the dominant carrier at the gateway to the country’s capital, featuring a seat share of 62% and being 12 times larger than the second operator — Ethiopian Airlines. In terms of its most significant services, the top 13 routes account for 29% of all weekly seats, representing a modest increase of 1% from last year’s figures. 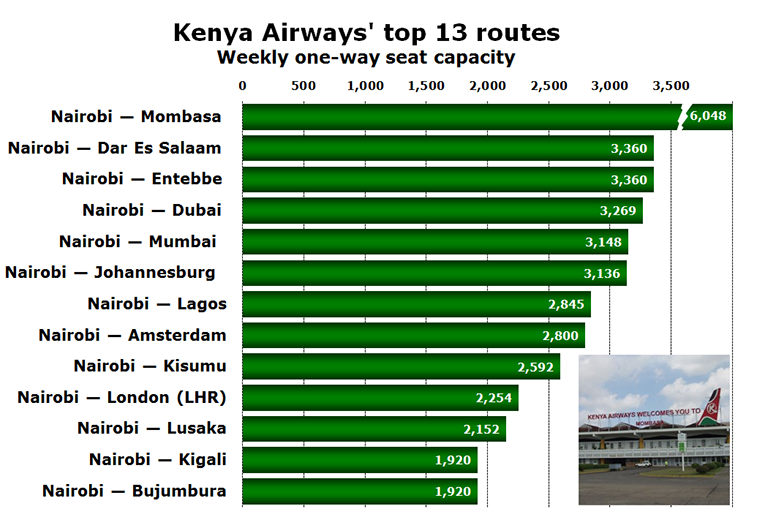 Kenya Airways’ weekly seat capacity posted 7.3% growth this August, when compared to data from the corresponding week last year, with eight of the top 13 airport pairs growing, while the 6,827-kilometre sector from Nairobi to London Heathrow saw its operations unchanged. Therefore, the stand out performance is that emanating from the route to Lagos, the seventh fastest-growing city in the world (according to City Mayors Statistics). Benefiting from this favourable economic climate, the airline has increased its capacity by 104% or 1,453 weekly seats in the past 12 months. On the other hand, this year’s top position — the Nairobi-Mombasa airport pair — provided the greatest capacity decrease (-25%), as a result of Kenya Airways having been reduced its frequency from 12 times to nine times daily.

On 1 April 2014 (not an April fool though), Kenya Airways launched its low-cost subsidiary — Jambojet, with the addition of three domestic services. Operating a fleet of three 737-300s, the new start-up is currently flying from Nairobi to Kisumu with twice-daily flights, to Eldoret with 10 weekly operations as well as to Mombasa with four daily services. Therefore, the capacity decrease of Kenya Airways on the Nairobi-Mombasa airport pair comes as a result of the SkyTeam carrier transferring some of its operations to Jambojet in April.