On 9 July, Air New Zealand celebrated the delivery of the first 787-9 at the Future of Flight museum near Seattle, which was handed over by the American producer on 30 June. This aircraft is the first of 10 787-9s to join Air New Zealand’s fleet. The aircraft will operate the Auckland-Perth airport pair from 15 October 2014 and to Shanghai and Tokyo later this year. Commenting on the delivery, Christopher Luxon, CEO, Air New Zealand, said: “It’s a privilege to be the global launch customer for this aircraft and our team is looking forward to flying it home to New Zealand. The 787-9 is a real game changer and we can’t wait for our customers to experience it.”

After the strongest May, both Airbus and Boeing stepped up their deliveries in June of this year, improving on last year’s results by 17 units. Besides the fact that Boeing maintains its leading position over Airbus in terms of aircraft delivered in the sixth month of the year, the American manufacturer continues to lead the 2014 delivery race by 39 units (up from 23 in May). When compared with the first six months of 2013, the half-yearly deliveries have been increased by 44 units, with 645 aircraft incorporated by airlines into their fleet in 2014.

Having delivered more than 100 aircraft each month since March, the two manufacturers have once again recorded an impressive score, making it the best June since anna.aero started tracking aircraft deliveries in 2008. Therefore, the combined deliveries of both producers for the sixth month of the year, was 126, of which 71 came from the American manufacturer, and 55 from its European counterpart. Notably, Boeing improved its performance when compared with the same month last year, delivering 10 more units, while Airbus handed over seven more airframes. Overall, 31% of all June deliveries were wide-body aircraft, which is up 8% from last month’s figures. 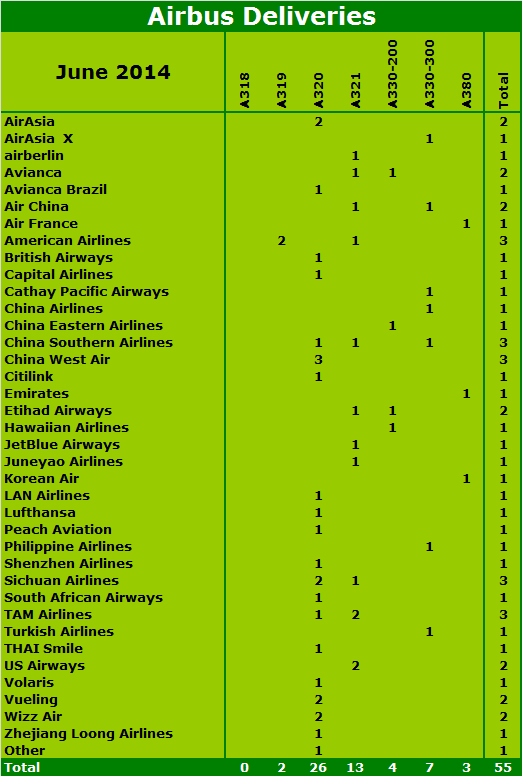 Airbus ended June with a total of 55 units delivered, which constitutes the same amount delivered in May 2014 and seven more airframes than in the corresponding month last year. Over the six completed months of 2014, the European manufacturer handed over 303 units, representing a modest increase of 2.7% (eight units more) on the same period last year.

Once again, single-aisle deliveries in June were led by the A320 (26 units), with 41 single-aisle jets provided to airlines around the world. China West Air, the Chongqing-based carrier launched in 2010, was one of four carriers to receive more than two narrow-body units from Airbus, as it incorporated three A320s into its fleet. Besides this, other noteworthy carriers to receive three units were Sichuan Airlines (two A320s and one A321), TAM Airlines (one A320 and two A321s) and American Airlines (two A319s and one A321), while five carriers saw two Airbus narrow-bodies join their respective fleets in June (including three low-cost carriers — AirAsia, Vueling and Wizz Air).

Moreover, a total of 14 wide-bodies were delivered in June, accounting for four more units than in both the preceding month and the corresponding month of 2013. Following May’s delivery of four A380s, the European producer handed over three units of the type in the sixth month of 2014, one each to Air France, Emirates and Korean Air. In addition, a total of seven A330-300s were delivered in June, one each to AirAsia X, Air China, Cathay Pacific Airways, China Airlines, China Southern Airlines, Philippine Airlines and Turkish Airlines. 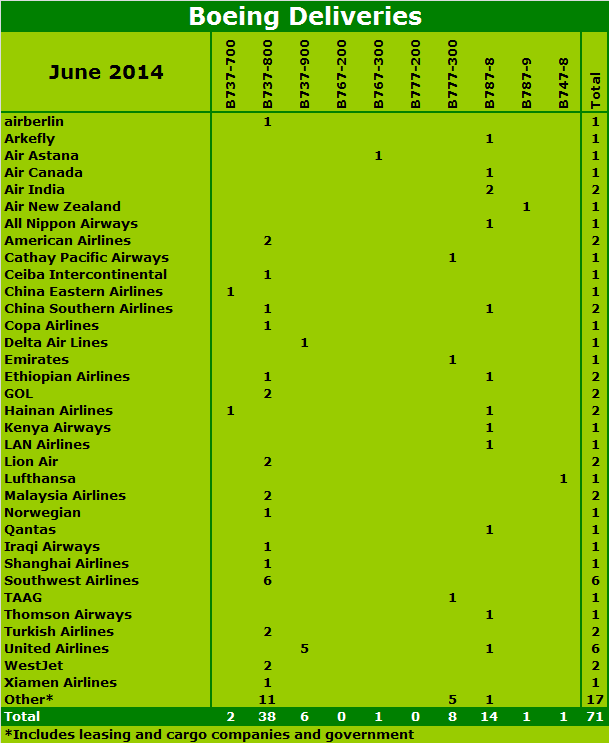 Airlines received a total of 46 narrow-bodies from Boeing, seven more than in the preceding month. In June, Southwest Airlines was the largest recipient of the 737 family for the third consecutive month, as it took delivery of six 737-800s. This was closely followed by United Airlines, which incorporated five 737-900s into its fleet. In addition, six other carriers received more than one single-aisle unit from Boeing, namely American, GOL, Lion Air, Malaysia Airlines, Turkish and WestJet, each with two 737-800s.

An impressive 25 wide-body airframes (a new high record) were delivered by the American manufacturer in June 2014, 10 more than in May. Moreover, the American producer bettered its year-on-year performance, handing over three more wide-body units than the 22 it managed in the corresponding month of 2013. Following seven and eight 787-8s delivered to carriers in May and April respectively, Boeing continued to clear the backlog with a total of 14 units of the type reaching customers in June. Air India incorporated two 787-8s into its fleet, while 12 other operators took delivery of one unit each. Notably, Boeing delivered its first 787-9 to Air New Zealand on 30 June.