Vueling and Norwegian fly to more countries than Ryanair and easyJet; Wizz Air offers most per million passengers 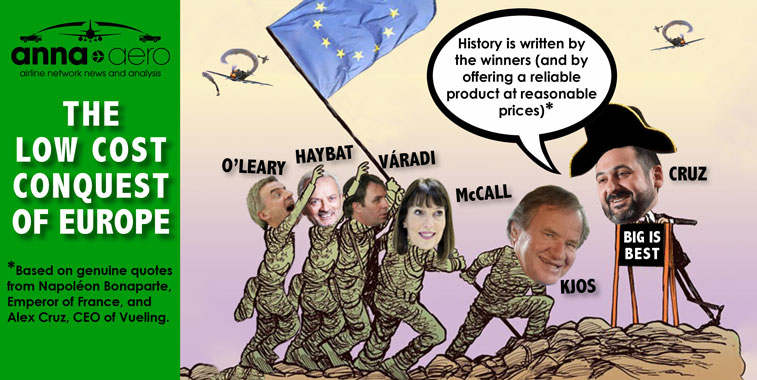 Everyone knows that Ryanair and easyJet are the biggest LCCs in Europe in terms of passenger number and destinations — 81.7m and 178 for Ryanair and 60.8m and 130 for easyJet (according to Flightglobal and Innovata Diio Mi data w/c 14 August 2014). But in this analysis we aim to reveal which of Europe’s big six LCC’s — Ryanair, easyJet, Norwegian, Vueling, Pegasus Airlines and Wizz Air (in that order in terms of 2013 passengers) — flies to the largest range of countries, and therefore gives its passengers the broadest geographical network.

Although Ryanair is nearly four times larger in terms of annual passengers, and easyJet around three times, than Norwegian (20.7m passengers, 118 destinations) and Vueling (17.2m passengers, 130 destinations), both of the European big boys are well beaten by the smaller LCCs in terms of the number of countries served. However, it is perhaps worthy of note that without its long-haul operations to the US and Thailand, Norwegian would have to share joint second place with Wizz Air. 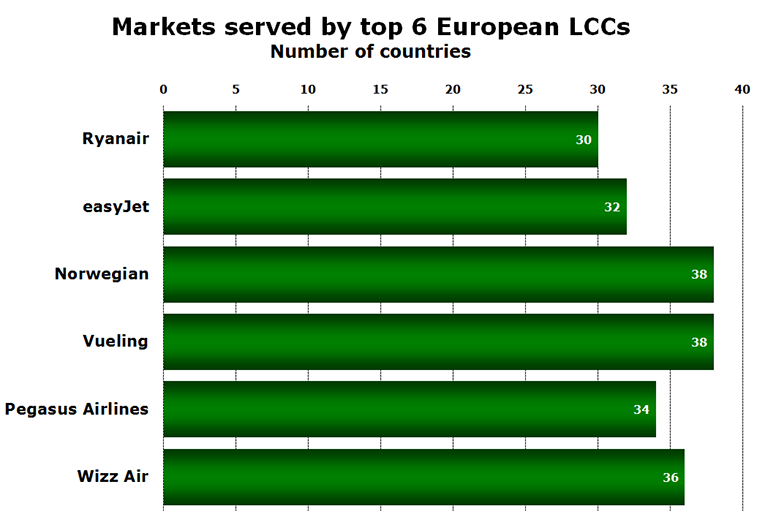 Seasonality has large part to play in terms of an LCC’s destination network, and it is no different when country markets are considered, with sun and snow giving carriers a reasonable amount of variance during the year. On this basis, Vueling is the most ‘seasonal’ carrier, operating 10 country markets (Armenia, Bulgaria, Belarus, Estonia, Finland, Iceland, Luxembourg, Malta, Cyprus and Lebanon) in S14 which will not be operated in the coming W14/15 period. These markets are largely insignificant to Vueling, as combined they represent less than 1% of total weekly flights.

Pegasus, and perhaps surprisingly Ryanair, have the least ‘seasonality’ in terms of the variance in country markets between the W14/15 and S14 seasons, with both carriers cutting their networks by one country market each — Croatia for Ryanair and Hungary for Pegasus. Croatia is also completely removed from the winter schedules of easyJet, Wizz Air and Norwegian too — highlighting the seasonality of this particular country market. Of all the six LCCs, Norwegian is the only one to operate a winter-only country market (UAE) which for W14/15 it will serve Dubai from Stockholm Arlanda (thrice-weekly), Copenhagen (weekly) and Oslo (thrice-weekly).

Interestingly, Vueling will this year alter seasonality on four of its markets (Croatia, Norway, Romania and Ukraine) to year-round from summer-only. In addition, Wizz Air has converted Greece from a summer-only destination in S13 to a year-round market, courtesy of a twice-weekly Budapest to Thessaloniki service which has been extended from S14 into W14/15.

At easyJet, one market has gone the other way, with Croatia being year-round during S13 and W13/14, but has now been converted to summer-only, as a result of the removal of the thrice-weekly London Gatwick to Zagreb operation. Similarly, Norwegian has switched Slovakia to a summer-only operation.

To level the playing field between the biggest and the smallest carriers, it is reasonable to actually give to some value and weight to these destinations by looking at the available country markets per million passengers. Although Ryanair and easyJet are bottom of the pile again, there are changes at the top, with Wizz Air having the broadest network using this metric, followed by Vueling this time. Norwegian fares the worst, dropping from joint first to #4 using this metric. 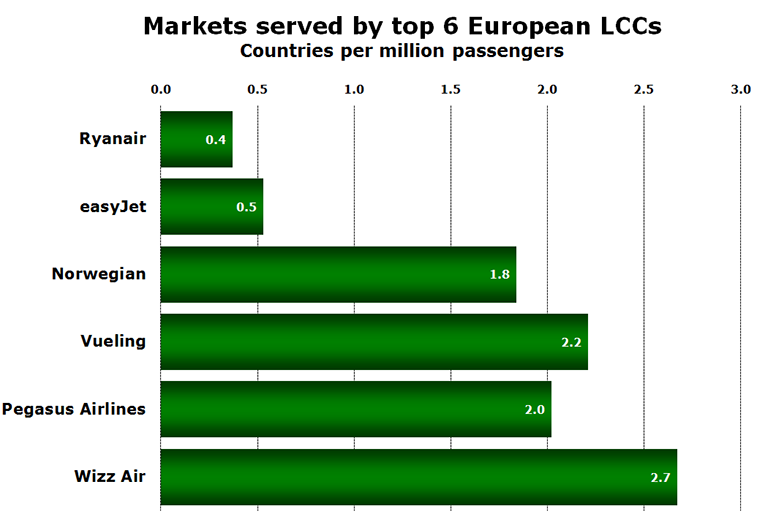 easyJet removes Jordan and Norway from its network

Vueling has been the most significant mover over the last 12 months, adding eight new country markets. Ryanair’s return to the Swiss market this year is its only addition, with the introduction of five weekly services to Basel from London Stansted, and thrice-weekly between Basel and Dublin.

easyJet’s removal of services to Amman (thrice-weekly) and Bergen (daily) from Gatwick, has meant that the LCC serves one less country market in 2014, and is the only one of the big six to have completely removed countries from its network. The 17 October 2013 addition of Romania with a four times weekly service to Bucharest from its main base at Gatwick has helped to partially alleviate the loss of Jordan and Norway.