Florida is a busy and competitive aviation market, it ranks only behind California and Texas in terms of weekly seats available, with 22 airports currently offering commercial services and all of them jostling for potential passengers (according to Innovata / Diio Mi data). Of these airports, Palm Beach International is the seventh largest, in terms of weekly flights and weekly seats, behind Miami, Orlando, Fort Lauderdale, Tampa, Jacksonville and Southwest Florida (Fort Myers).

This highly competitive market has delivered some winners and losers over recent years, with Palm Beach, until recently, unfortunately being in the latter bracket. However, since a traffic low in 2012, the airport seems to be once again riding a positive curve. Indeed, the first five months of 2014 have delivered an average growth rate of 3.3%, with April being the standout result, with 8.8% annual growth registered. If the airport continues on its existing 2014 growth trajectory, anna.aero predicts that it will get close to the 5.89m passenger figure achieved in 2010. 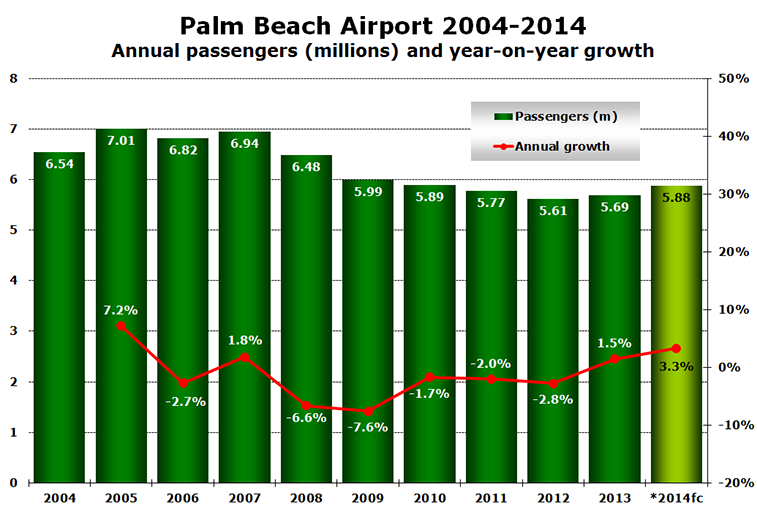 Entering Palm Beach’s monthly passenger data for 2013 into anna.aero’s Seasonal Variation in Demand (SVID) calculator, the airport performs well, generating a score of 5.65 — a ‘good’ rating. With nearly 40 seasonality performance evaluations completed so far in 2014, the airport will be satisfied with its global ranking of 26th, nestling in between Cluj (5.51) and Edinburgh (5.81), however if it had matched its 2012 performance of 4.62, this would have seen it achieve 21st spot. 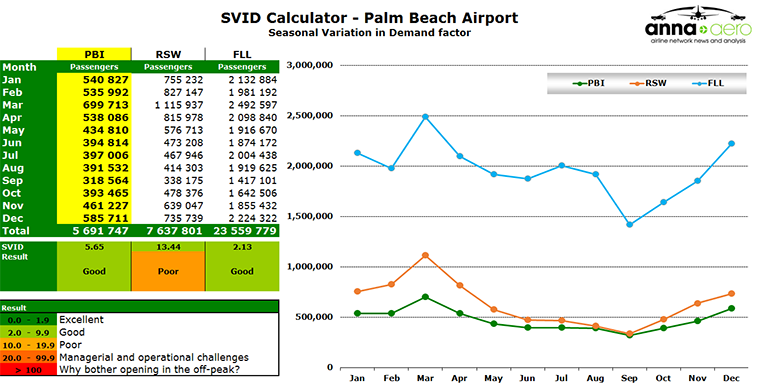 Evaluating Palm Beach alongside its Floridian peers, we also ran SVID calculations on nearby, but significantly busier Fort Lauderdale, the world’s 65th busiest airport (2.13 – ‘excellent’) and similarly-sized Southwest Florida, which generated a ‘poor’ result (13.44). All three of the airport’s seasonality results are negatively impacted by the Spring Break peak in March and the September low season, particularly at Southwest Florida, where its March traffic is nearly four times larger than that recorded in September.

Looking at Innovata / Diio Mi data for week commencing 21 July 2014 versus the same week last year, weekly seats at Palm Beach are less than 1% up year-on-year. Delta Air Lines and JetBlue Airways have maintained their respective #1 and #2 spots, with the former having increased its weekly seats by 4.9%, whereas the latter has marginally trimmed back its capacity, offering 2.3% less seats in July 2014. While Delta has upped its weekly seats from Atlanta to Palm Beach by 14% this year, this increase has seemingly come at the cost of connections from its other two destinations, Detroit (-15%) and New York LaGuardia (-10%). 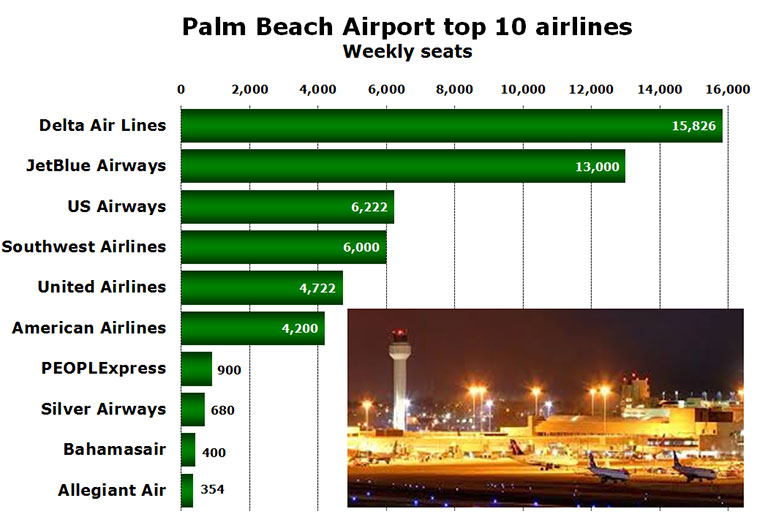 In the last 12 months, Palm Beach has seen the arrival of Allegiant Air, with a twice-weekly service from Asheville in North Carolina, which started on 15 May, and the departure of AirTran Airways, in terms of serving airlines. That said, Southwest Airlines has taken up much of the slack left by AirTran, increasing its capacity by 47% year-on-year. However, the combined net position for both airlines is -8.4% lower in 2014 than the same week in 2013.