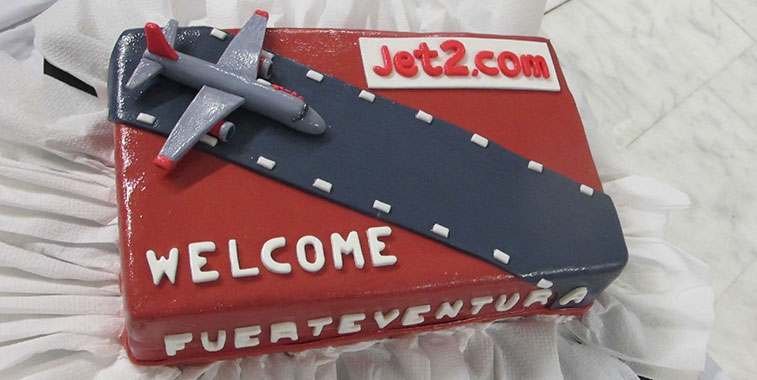 Jet2.com has helped drive passenger growth of 21.4% between the UK and Fuerteventura in the Canary Islands in the first half of 2014. Since the beginning of the year it has launched routes from East Midlands (24 May), Glasgow (4 April), Leeds Bradford (4 April), Manchester (4 April) and Newcastle (24 June).

anna.aero’s analysis of traffic data from the UK Civil Aviation Authority (CAA) shows that passenger numbers on international routes from UK airports were up 4.5% in the period January to June 2014, compared with the first half of 2013. Analysis of the UK’s top 15 international country markets reveals that 14 of them have registered growth compared with 2013, with three managing growth of more than 10%. The only market currently in decline is Poland (down a modest 2.4%), which was the fastest-growing when a similar analysis was done a year ago. The top 14 country markets are the same as this time last year, but Denmark has replaced Canada at #15, climbing three places from last year’s position of 18th, also passing India and Norway. 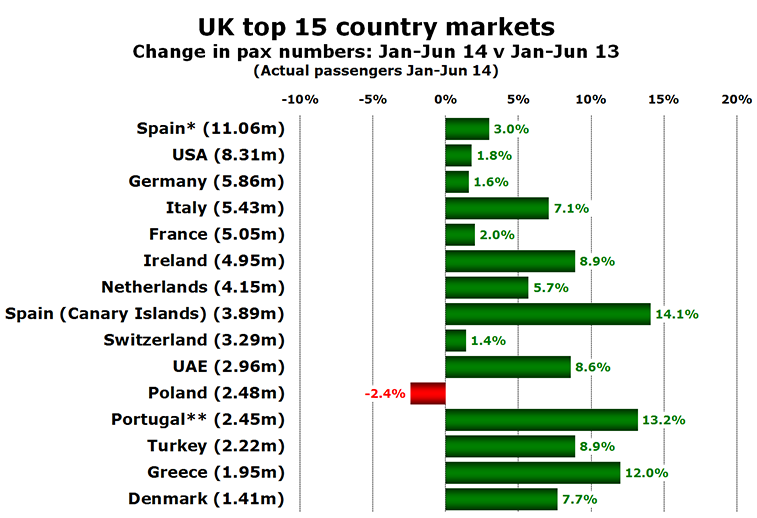 If volume growth rather than percentage growth is analysed, then the Canary Islands (which the UK CAA treats as a separate country market) is the fastest-growing, with a net gain of over 480,000 additional passengers in the first half of the year. The rest of Spain ranks fourth behind Ireland and Italy. The abolition of the Irish travel tax in April of this year appears to have significantly benefitted demand between the UK and Ireland. 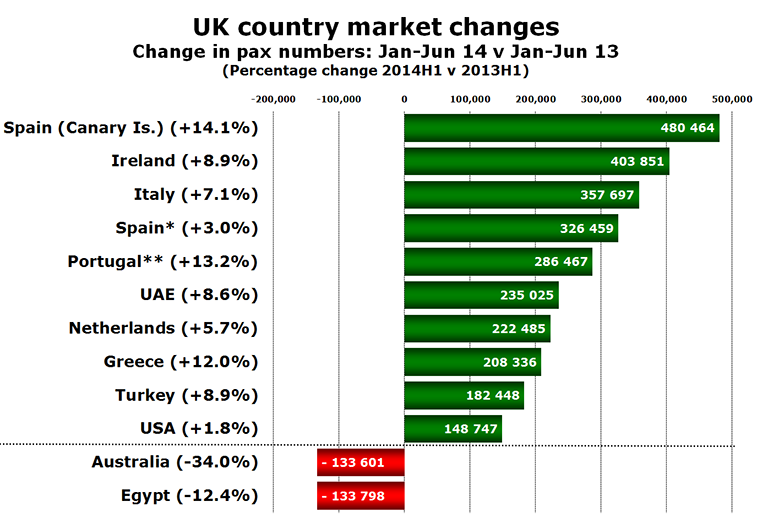 The decline in the Egyptian market may not be that surprising given the on-going political tensions in the country which have clearly depressed demand for holidays there. The apparent decline in the Australian market is more complex to explain, but is likely to be similar to the answer we received from the UK CAA a couple of years ago when we identified a similar issue.

Lanzarote, Fuerteventura and Gran Canaria all seeing growth of 15% or more

While Tenerife remains the largest market from the UK among the Canary Islands, growth in percentage terms has been higher at the neighbouring islands of Fuerteventura, Gran Canaria and Lanzarote. The first and third of these have reported growth from the UK of more than 20% in the first half of this year.

According to Innovata / Diio Mi data for July, weekly seat capacity between the UK and Poland is down almost 10% compared with last July. The main reason for this is Ryanair’s decision to suspend a number of routes to Polish regional airports. All of these routes were served last summer with between two and three weekly frequencies.