As part of its 2014 expansion, Arik Air has launched five weekly flights from Lagos and Abuja to Dubai on 28 July, which will be operated using its A330-200s. Addressing the audience shortly before the airline’s first departure to its 12th international destination is Sally Mbanefo, General Director, Nigerian Tourism Development Corporation.

Founded on 3 April 2006 after taking over the former Nigerian Airways’ facilities in Lagos, Arik Air is a privately-owned airline operating mainly from Lagos and Abuja airports to a total of 12 countries. The airline has been growing rapidly in recent years as August 2014 capacity results in almost 30% growth when compared to the corresponding month four years ago. Furthermore, with over 40% of weekly seat capacity in Nigeria, Arik Air has established itself as the largest operator in the country, above Aero Contractors and Dana Air. According to Planespotters.net, the carrier is currently operating a mixed fleet of 22 units, including Airbus, Boeing, Canadair and Bombardier aircraft types.

Examination of Arik Air’s traffic data indicates that the carrier handled 2.7 million passengers last year (a new record high), representing an increase of almost 19% when compared to 2012 figures. March 2013 was significant in that the operator posted the highest passenger figure for the year, with a total of 260,132 passengers handled, when compared to 171,794 recorded in the corresponding month of 2012.

Furthermore, with a new addition to its network — five weekly operations to Dubai from Lagos and Abuja on 28 July using its A330-200s, the carrier is likely to continue its growth in 2014. Commenting on the addition of the 12th international destination, Michael Arumemi-Ikhide, CEO, Arik Air, said:  “This is another exciting moment for us all at Arik Air, not only adding a new international destination, but becoming the first airline to link the capital Abuja to Dubai. The importance of Dubai as the Middle East’s commercial capital makes it imperative for Arik Air to connect the city with Lagos — Nigeria’s commercial capital.” 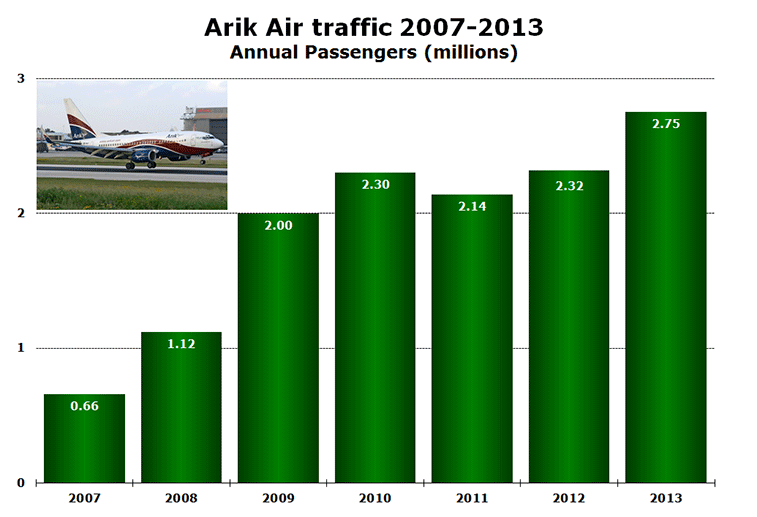 Overall, looking at passenger development between 2007 and 2013, Arik Air posted a decrease of 7% in 2011. With that exception, the carrier has experienced growth each year, achieving a massive increase of over 300% in 2013, when compared to 2007 figures. Also noteworthy is the fact that Arik Air has flown over 13 million passengers from 30 October 2006 (the day it began commercial operations from Lagos to Abuja) until 31 December 2013.

“The figures for the period just ended are very encouraging and reflect the steady growth that we have been experiencing since launching our operations on 30 October 2006. We have gone through a rapid expansion over the years, while the last two years have been used to consolidate our presence in new markets,” highlighted Chris Ndulue, MD, Arik Air as part of the airline’s development over this timeframe. “Arik Air has been the success story of Nigerian commercial aviation. This is set to continue and there is much to be achieved. During 2014, the airline plans to increase its market share in Nigeria. With the addition of three new aircraft to our fleet last year, we are set to continue our expansion programme by commencing flights to Dubai this week.”

Lagos-Abuja is #1 route by seats

According to Innovata schedule data for this August, the carrier operates 80 non-stop services, with the top 11 airport pairs accounting for 31% of all weekly seats (representing a 2% increase from last year’s figures). Following a modest yearly increase of 5.9%, the 510-kilometre sector from Lagos to Abuja still accounts for the majority of weekly seats in 2014. From its two hubs, Arik Air operates a combined network of 38 routes this summer, of which Port Harcourt is the most frequently flown destination, being operated 60 times weekly (Lagos — 39 times weekly, Abuja — thrice-daily). Overall, the carrier’s domestic operations account for an 85% share of seat capacity, with seven of the top 11 airport pairs being services operated within Nigeria (highlighted in dark green in the chart below). 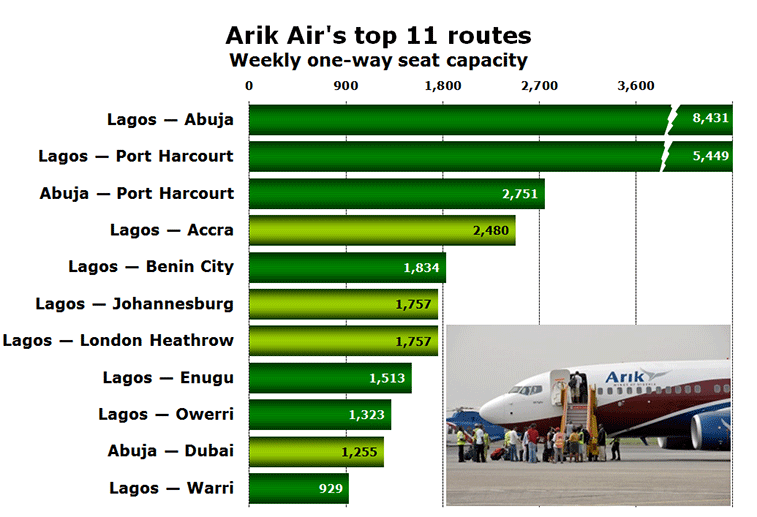 This August, Arik Air’s weekly seat capacity experienced 4.7% growth when compared to data from the same week last year, with six of the top 11 routes growing, while another two saw their operations unchanged. Therefore, the 468-kilometre link between Lagos and Enugu is the fastest growing airport pair, having increased by 65% or 596 weekly seats in the past 12 months. By comparison, services from Lagos to Warri provided the greatest capacity decrease (-7.8%), as a result of the carrier having been trimmed its frequency from twice-daily to 12 times weekly.