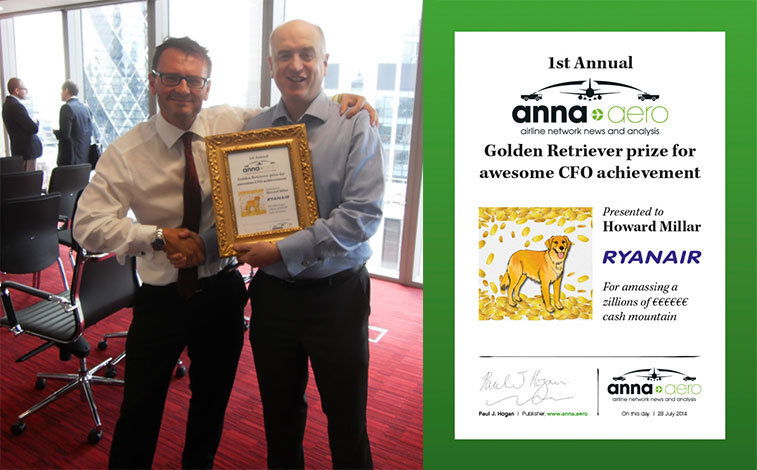 In one of his last roles as Ryanair Chief Financial Officer, Howard Millar delivered some sparking financial results on Monday, largely attributed to the “Always Getting Better,” be-nicer-to-people, customer experience programme which saw post tax profits rise to €197 million for the Q1 period ending 30 June, up on 152% on last year.

In tribute to Millar’s stewardship of the Ryanair cash mountain (net cash now stands at €643m) every year anna.aero will now bestow the “The anna.aero Golden Retriever Prize for Awesome CFO Achievement” – an award named in tribute to Millar’s “second career” as a world-leading amateur authority on the famously-obedient gun dog.

Millar has not said where he is going yet but is widely believed that the exercise-loving breed will feature heavily in his plans. Witnessing Millar receive the prize in a brief ceremony in the City of London the Ryanair Chief Executive, Michael O’Leary, in between convulsive sobs, said: “What Howard does not know about Golden Retrievers has not been invented yet, I’m just so glad he’ll be able to spend more time with Cleo and Della.”