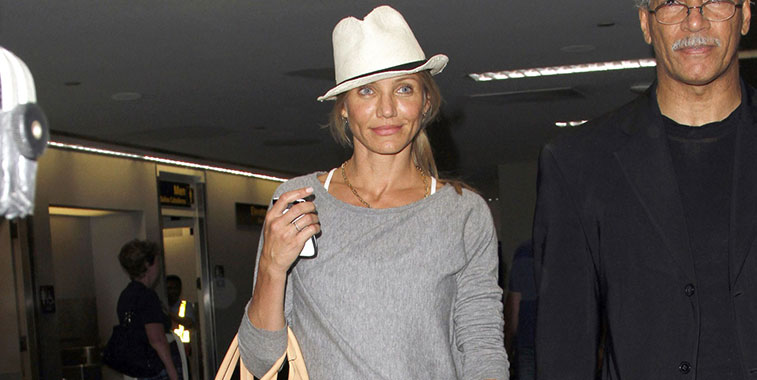 New York LaGuardia Airport was recently visited by Cameron Diaz, who was transiting the facility while working on her latest movie — What to Expect When You’re Expecting. Dressed casually, the Hollywood star looked like she could benefit from a holiday to one of 75 non-stop destinations served from LaGuardia.

Part of a truly global airport system for New York that handled over 112 million passengers in 2013 (being classified as the second busiest airport system worldwide, behind London’s), New York LaGuardia Airport contributed almost 27 million of those passengers. In fact, last year the combined figures of the three major New York airports (the other two being New York JFK and New York Newark) surpassed their latest peak achieved in 2007 at 110 million passengers.

Following an increase of 3.4% in passenger numbers last year when compared to 2012 figures, LaGuardia established itself as the 21st busiest airport in the US, while JFK was ranked #7 (+2.7%) and Newark #14 (+3.1%), according to anna.aero’s American Airport Traffic Trends database. Furthermore, the airport is classified as #59 in the 2013 global rankings, after being overtaken by Antalya. Under the operational control of The Port Authority of NY and NJ (PANYNJ), the airport currently serves as a base for Delta Air Lines, as well as a focus city for American Airlines.

Also noteworthy is the fact that LaGuardia is the busiest airport in the US without any non-stop flights to Europe, due to a perimeter rule that prohibits all non-stop sectors to and from points beyond 2,400 kilometres, the only exception being flights departing on Saturdays, or those services operating to Denver. Examination of Innovata schedule data for this August indicates that the airport’s summer programme includes 75 non-stop services operated to the US and Canada, with the 1,180-kilometre route to Chicago O’Hare being the most frequently served sector. 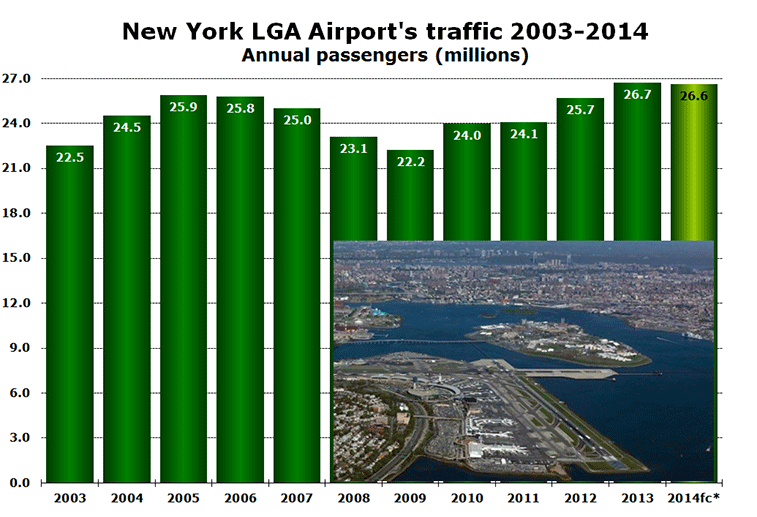 Analysis of data facilitated by the PANYNJ reveals that while the traffic fluctuated in the last decade, LaGuardia consolidated its annual passenger performance after 2010, reaching a new record high last year. Almost 23 million passengers used the airport 11 years ago, a number that increased by 19% in 2013.  In the first five months of 2014, for which traffic data is already available, LaGuardia noted a marginal decline of 0.4% when compared to the corresponding period of 2013, with 10.6 million passengers achieved until end-May, while JFK’s traffic went up 3.9% and Newark’s decreased 0.1%. If LaGuardia continues on its existing 2014 decline trajectory, anna.aero forecasts it will handle close to 26.6 million passengers this year.

Entering LaGuardia’s monthly passenger data for 2013 into anna.aero’s Seasonal Variation in Demand (SVID) calculator, the airport performs exceptionally well, producing a score of 0.99, an “excellent rating”. To give LaGuardia a fair evaluation, we also ran calculations on JFK (1.77 — excellent) and Newark (1.19 — excellent). Against its airport peers from the New York area, the airport performs better than the significantly larger JFK (50 million annual passengers) and Newark (35 million), due to traffic being more evenly spread throughout the year. With over 40 seasonality performance evaluations completed so far this year, LaGuardia has entered the rankings at #4 position, between Canberra (0.74) and Orlando (1.07).

Delta controls 41% and 46% of seats and flights

Evaluation of Innovata schedule data for this summer reveals that a total of 10 carriers are operating from LaGuardia with Delta maintaining its top position, even though it reduced its weekly capacity by 2.8%. Therefore, the SkyTeam member commands 41% and 46% of seats and flights respectively and operates a total of 65 domestic airport pairs from LaGuardia this summer, with Atlanta being the most frequently flown destination with 113 weekly flights. One of the oldest airlines still operating in the US, Delta is almost three times larger than the #2 operator – American, which represents a weekly seat share of 18%. Overall, as of August 2014, LaGuardia offers significantly less operating airlines than its New Yorker peers, with JFK leading the area’s triumvirate with 70 operators, followed by Newark with 25 carriers. 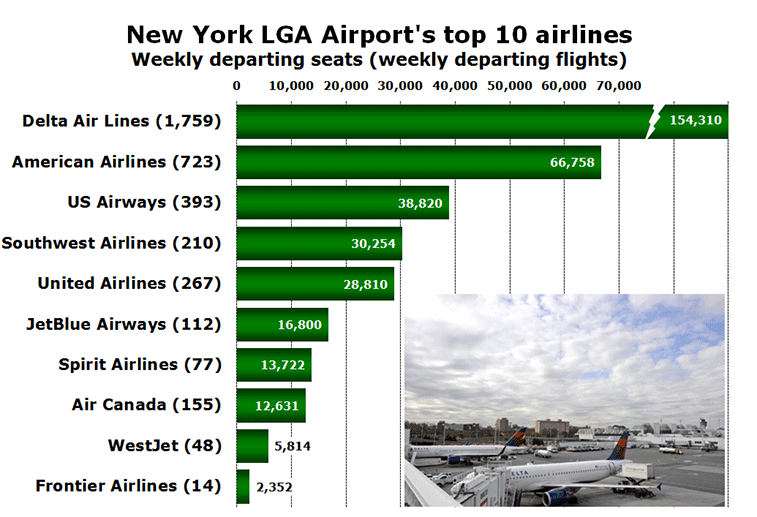 Weekly seat capacity for this summer decreased slightly by 0.3% with just Southwest Airlines and Frontier Airlines recording growth, while JetBlue Airways and Spirit Airlines saw their operations unchanged (when comparing data from this August with the same week last year). Ranking fourth, the world’s largest LCC – Southwest, is the fastest growing carrier at LaGuardia, as a result of transferring capacity from its subsidiary, AirTran Airways. In 2011, Southwest acquired AirTran to expand its presence at many of the carrier’s hubs, including LaGuardia. As a consequence, Southwest posted an annual increase in weekly capacity of 78% or 13,299 additional seats this summer. By comparison, US Airways has provided the greatest capacity decrease (-5.1%), as a result of reducing its frequencies to Boston and Charlotte Douglas.