Mascots, mascots, everywhere! Japan’s new breed of LCCs seem to love a mascot (or five) to celebrate a route launch as demonstrated by; Jetstar Japan (Tokyo Narita to Takamatsu), Peach Aviation (Okinawa to Fukuoka) and Vanilla Air (Tokyo Narita to Amami-Oshima). These three LCCs now have 6.4% of the domestic market in terms of seat capacity, up from 5.2% a year ago.

Japan’s two biggest airlines (All Nippon Airways and Japan Airlines) report detailed monthly traffic statistics. Combining their figures gives a good indication of the domestic market, as between them they account for almost three-quarters of all seat capacity. anna.aero’s analysis of their combined data shows that for the first time since we started collecting data in 2006, domestic and international traffic have grown year-on-year for each of the last 12 months. The airlines’ drop in international traffic in early 2013 coincides with the 787 grounding, of which ANA at the time had 17 and JAL seven. 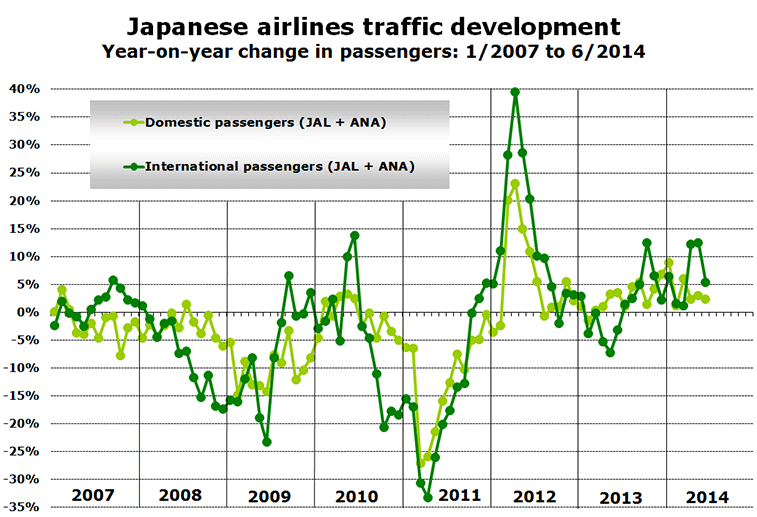 Analysis of schedule data in the Japanese domestic market shows that while overall seat capacity is up a modest 1.2%, the two leading carriers have cut their capacities, resulting in their combined share falling from 75.2% in August 2013 to 73.7% in August 2014. The combined market shares of the relatively new local LCCs (AirAsia Japan/Vanilla Air, Jetstar Japan and Peach Aviation) has grown from 5.2% to 6.4%.