Palma de Mallorca looking to smaller markets to drive growth; airberlin and Ryanair account for over 40% of traffic

The fastest-growing segment of the Palma de Mallorca market is from routes outside of the ‘big 3’ markets of Germany, Spain and UK. An example of this is the new weekly service from Riga in Latvia which launched on 1 June. At almost 2,500 kilometres it is the longest new route at the airport launched in 2014.

Palma de Mallorca Airport is Spain’s third busiest airport, handling 22.8 million passengers in 2013, up a modest 0.4% on the previous year. This is still just short of the 23.2 million that passed through the airport in its peak year of 2007. Mallorca (also known as Majorca) is the largest of the islands that make up the Balearic Islands, with Menorca and Ibiza the other two major islands. Mallorca is particularly popular with German and UK tourists who make up over half of all passengers who visit the island. 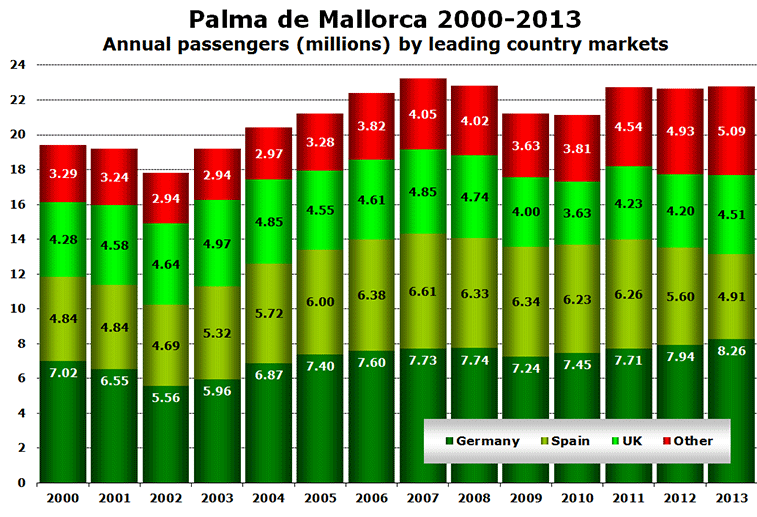 Analysis of data provided by airport operator Aena, shows that routes to and from Germany accounted for 36% of Palma’s traffic in 2013, with Spanish routes contributing a further 22% and UK routes 20%. All other country markets represented the remaining 22% of passengers. Since 2000, total airport traffic has grown by 17.2%. German traffic has grown slightly faster (+17.7%), while UK (+5.6%) and Spanish (+1.3%) demand has grown more slowly. The remaining country markets combined have seen growth of almost 55%.

Passenger throughput at the airport peaks in the main summer holiday months of July and August. In 2013, the August passenger figure was over six times higher than the off-peak month of January. This results in the airport having a SVID rating of 42.15, which is among the highest seen so far on anna.aero. However, this is still better than the ratings for Menorca (85.38) and Ibiza (80.99) which have even more extreme seasonality profiles. Traffic in the first half of 2014 was down just 0.1% compared with the first half of 2013, though in June passenger numbers were up 3%. 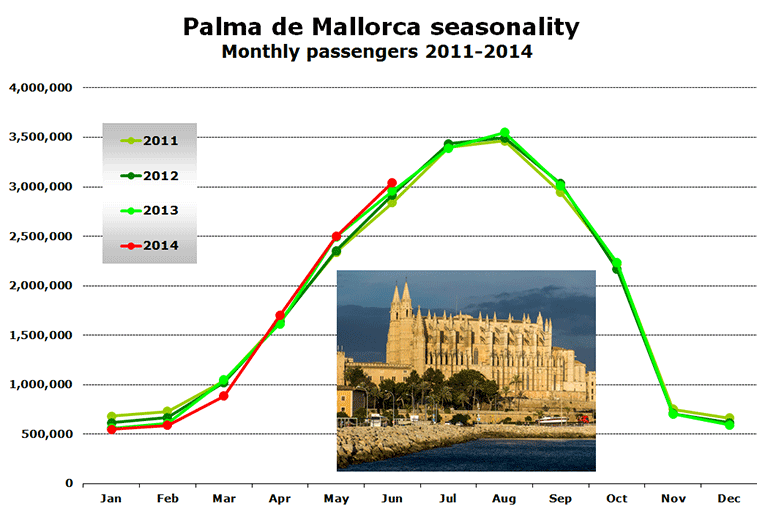 Analysis of the leading airlines at the airport shows that airberlin remains by far the busiest, handling over six million passengers last year. Ryanair, has surged into second place in recent years, having ranked only 11th as recently as 2008. The Irish ULCC is twice as big as third placed Air Europa, which has its corporate headquarters on the island in the small town of Llucmajor. Apart from Ryanair, the only airline in the top 15 that is not based in either Germany, Spain or the UK is NIKI, which is the Austrian subsidiary of airberlin. 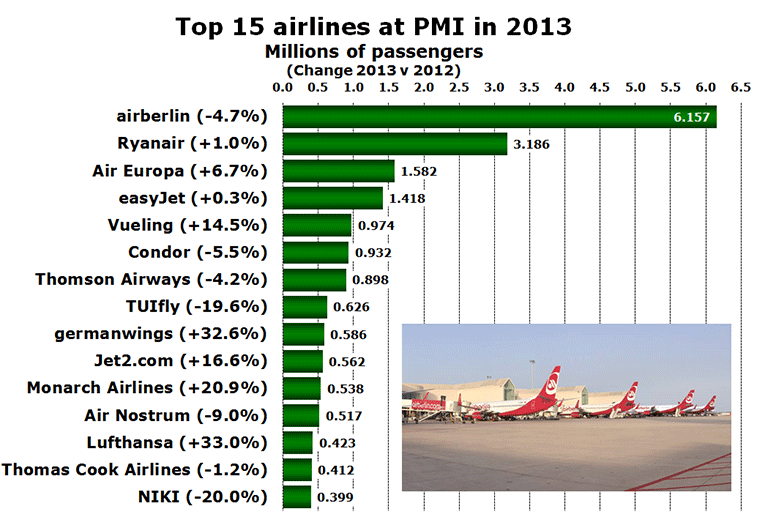 Apart from revealing that Ryanair then ranked only 11th, a look at the top 15 airlines in 2008 also included Hapag-Lloyd Express (which now operates as TUIfly), Spanair (defunct), and clickair (which merged with Vueling). Other LCCs which no longer exist which served the island include bmibaby, flyglobespan and Sterling.

Growth coming from outside the ‘big 3’ markets

Comparing 2013 with the peak year of 2007 shows that the Spanish market is down (-25.7%) as is the UK (-6.9%), while the German market has grown by 6.9%. All other markets combined have grown by a significant 25.7% highlighting that future growth at the airport is likely to come from these smaller, but faster growing markets. So far in 2014, the airport has seen new services to the following smaller country markets: