Pegasus Airlines steams ahead with (for most airlines) scary levels of double-digit growth; set to pass 20m annual passengers 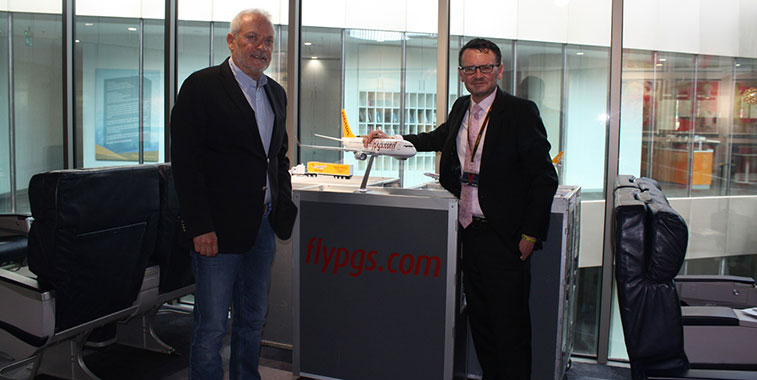 Caught stealing in reception by Pegasus Airlines’ CEO. anna.aero’s Publisher Paul Hogan always likes to leave an airline headquarters with a memento of his visit. He also came away with a list of growth statistics which would scare the pants off many airline CEOs. But then this is Turkey – where everything is growing fast.

When writing about airlines like Pegasus Airlines, you realise that there are only so many ways you can describe it’s meteoric progress, and you resort to having to use the same phrases repeatedly – like fast-growing, double-digit increases or booming. However, there are city pairs on its network which are not growing and destinations that have failed to react positively to its golden touch – which we attempt to reveal here.

Off the chart levels of growth

Pegasus has been around since the late 1980s, when the carrier started life as charter airline. However, the step-change in its growth came in 2005 when the airline adopted the low-cost business model and it chose the little known secondary airport of Istanbul Sabiha Gökçen as its new hub (now primarily due to Pegasus’ growth, it is one the world’s fastest growing airports). Despite the airline’s booming levels of activity, it has managed to maintain load factors, with 2013 annual figures of 78.3% being improved upon in Q1 2014, increasing to 78.7%. 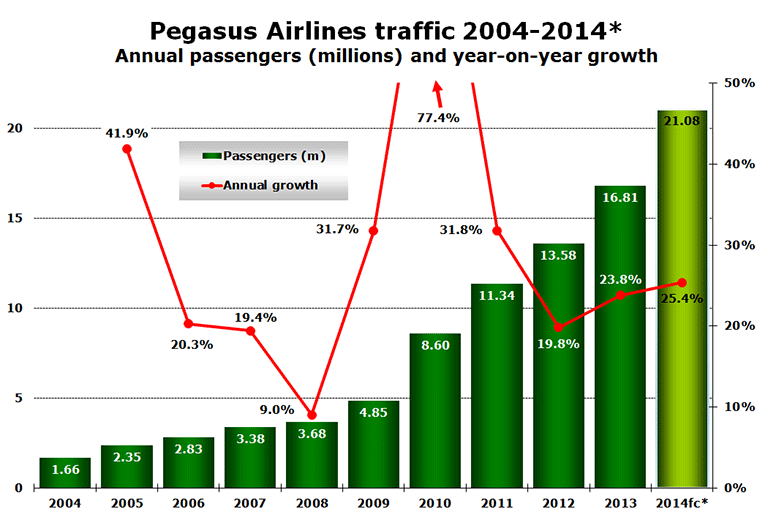 Unsurprisingly, the airline’s main hub at Sabiha Gökçen dominates the airline’s flying programme, with nearly 40% of flights emanating from the equally fast-growing Istanbul airport. In the last 12 months, Pegasus’ hub has strengthened in terms of its importance to the airline, gaining an extra 2.4 percentage points in that period. Total flights for the carrier have grown by 15%. 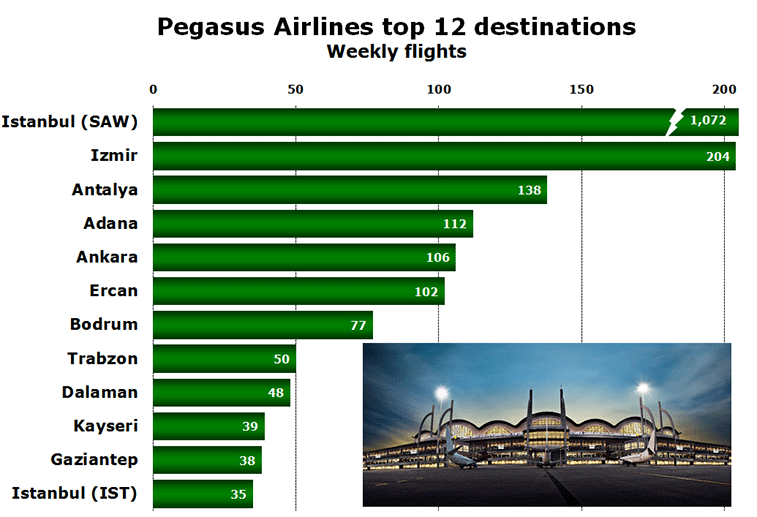 In terms of annual growth, Sabiha Gökçen does not hold the top spot (but it is #2 with 22%), as this is the domain of Dalaman, which outstrips the capital city airport, by increasing its weekly flights by nearly 30% year-on-year. This has come primarily as a result of Pegasus increasing the connections between Dalaman and Sabiha Gökçen up from five times daily to nine times daily (on some days of the week). 10 of the airline’s top dozen routes have posted yearly capacity increases, with only Istanbul Atatürk (flat) and Ankara (modest decline of 0.9%) not joining that particular club. Along with those airports previously mentioned, Bodrum, Trabzon, Dalaman and Gaziantep all posted double-digit increases.

Given the airline’s more or less homogenous fleet (it operates 50 737-800/400s and now four A320s — Source: Planespotters.net), Pegasus’ annual seat growth is also up by 15% (as it was with its flights). The fastest-growing city pair within its network is that of Dalaman to Sabiha Gökçen, which has witnessed a 37% spike in capacity in the last year. The airline has added nearly 2,500 weekly seats on this domestic route. The biggest international route is #16, from its home hub to Tel Aviv. 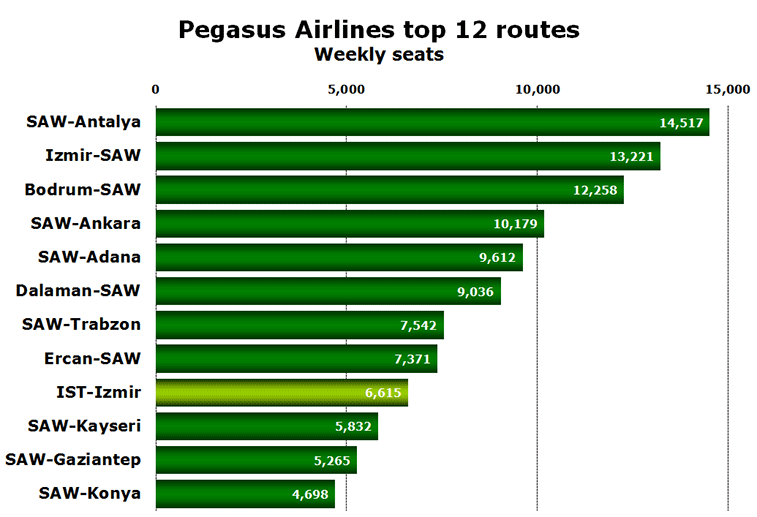 Only one route (highlighted in light green) from Pegasus’ top 12 does not feature its main hub at one end of the route, which is the airline’s #9 airport pair between Atatürk and Izmir. This route is also one of only two not to register any annual capacity growth, being level year-on-year in terms of weekly seats. With a 4% decline, the domestic sector between Sabiha Gökçen and Konya is the only route of the top 12 to register any capacity decrease. Eight of expanding routes delivered double-digit annual growth.