Swiss airports often win anna.aero awards for new route growth, like the team here at Zurich Airport (for Cake of the Week for Edelweiss Air’s route to Havana launched 8 May). The country’s four main airports have delivered a CAGR of around 4.5% since 2005, despite the economic downturn, which saw traffic fall by 2.1% in 2009.

With a population of around 8m inhabitants, Switzerland is a country market which is similar in size to some European capital cities. However, with a high GDP per person, highly successful global corporations and banking sector, there is a high propensity to travel from this land-locked nation. As such, the county sustains six airports with commercial services – namely Zurich, Geneva, Basel, Bern, Lugano and Altenrhein, however when consulting Innovata schedule data for July 2014, the latter three contribute less than 1% of seats available. 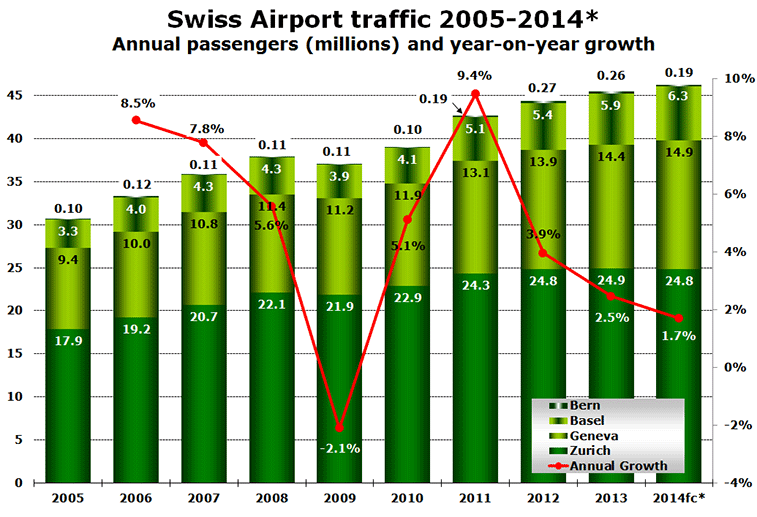 Of the big four Swiss airports, the CAGR at Bern of 11.9% outstrips that experienced at Basel (6.7%), Geneva (4.9%) and Zurich (3.7%), although the latter’s absolute increase in passenger numbers of seven million, is of course more substantial than Geneva’s five million, Basel’s 2.6m and Bern’s 166,000. So far in 2014, looking at traffic figures across the first five months of 2014, these three main Swiss airports have delivered a combined marginal growth of 1.7%, with Basel still leading the way with 6.4% growth, Geneva at 3.6%, Zurich flat and Bern down. A continuation at this growth level will see the Swiss market inch towards a traffic milestone of 50m in the coming years.

The dominant two carriers in the market, SWISS and easyJet, have held this position since we last looked at this country market five years ago. Their respective position has however deteriorated over the last 12 months, with the combined share of the top two airlines falling from 55.8% to 55%. However, their recent performance is still better than it was five years ago, when they delivered a combined 53% of Switzerland’s seats. While SWISS has added seats year-on-year (nearly 13,500), its share has still tumbled from 38.3% to 36.7%, due in part to the more significant capacity increase by easyJet, up by nearly 50,000, which has seen its stake in Switzerland grow from 17.5% to 18.3%. 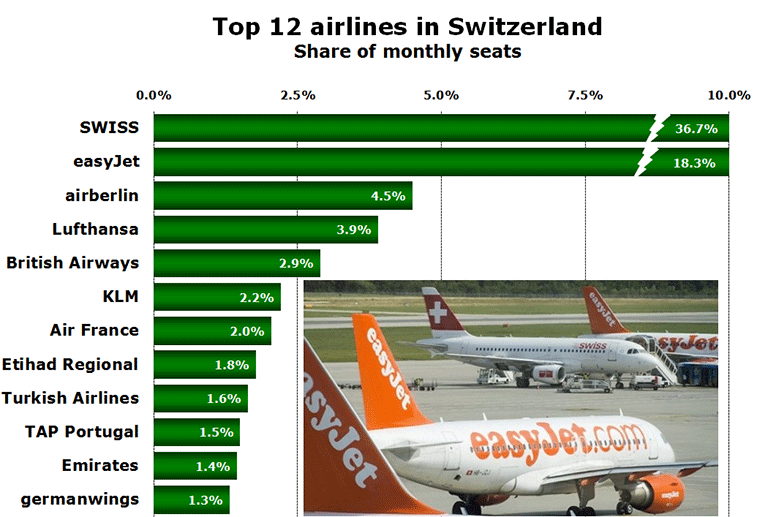 The top 12 airlines constitute 78.2% of all flying in Switzerland, with 2.17m seats in August 2014. While the number of seats offered by the top 12 has increased from 2.09m in August 2013, their combined share of the total market has declined from the 79.6% recorded a year ago. In those 12 months, airberlin (+13,545 seats) and Lufthansa (-35,898 seats) have traded places, as the latter shifted non-hub capacity to its affiliate germanwings (+24,165 seats), which now makes it into the top 12 serving carriers, and forces Austrian Airlines to exit. Recent growth at Etihad Regional (+18,209 seats) has seen it leap from 10th to eighth in the rankings.

Like many country markets in Europe, Switzerland’s top passenger trading partners are those of the FIGUS nations (France, Italy, Germany, UK and Spain). These European traffic powerhouses have witnessed a slight slip in their grip on the Swiss market over the last year, with a drop from 50% to 49%. Despite this fall, all five nations are growing their seat capacity during August 2014, however their combined 3.4% increase is being outstripped by that being provided from other countries. 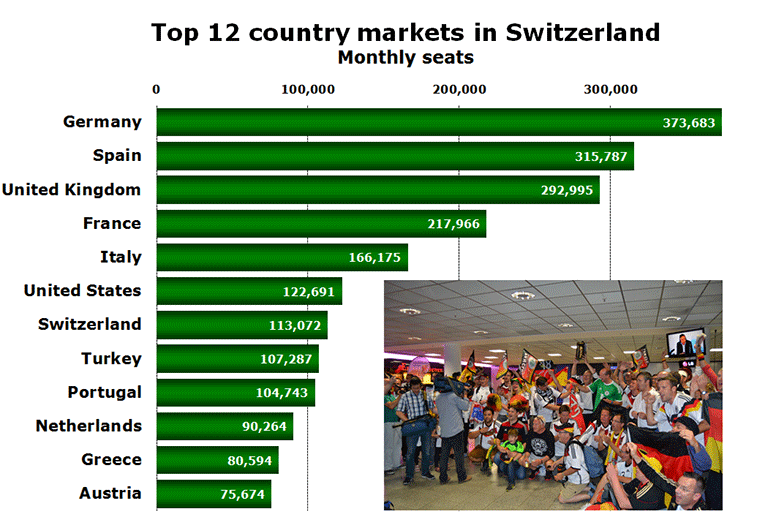 Indicating the robustness of the Swiss market, all of the top 12 country markets have produced annual growth since last August. Greece is the fastest growing country market, delivering a 43% spike since a year ago – with an extra 132 monthly flights between the two countries, split across the four serving airports in this market — Bern (-8), Basel (+19), Geneva (+34) and Zurich (+87). In #2 spot is the Swiss domestic market, which has increased by 23% year-on-year or over 21,000 monthly seats.