Nok Air has celebrated its 10th anniversary of operations from Bangkok’s Don Mueang Airport with a special paint job on its latest 737-800. Meanwhile at the airport, celebrations were led by Viratnkul Sivapetchranat (holding the “We fly smiles” placard) and Jaturongkapol Sodmanee, Don Mueang Airport Director (holding “AOT” placard).

On 23 July, Thai LCC Nok Air celebrated 10 years of operations. Throughout that period, the airline, in which Thai Airways owns a 39% stake, has operated almost exclusively domestic routes from Bangkok’s ‘downtown’ Don Mueang Airport (DMK). In late 2008, the airline was handling less than 100,000 passengers per month following what the airline refers to as the “oil price shock”. Since then, despite periods of political unrest, the carrier has increased its passenger numbers to over 600,000 per month. According to the airline’s Annual Report 2013, almost 5.9 million passengers flew with the carrier (up 41%) at an average load factor of 84%. 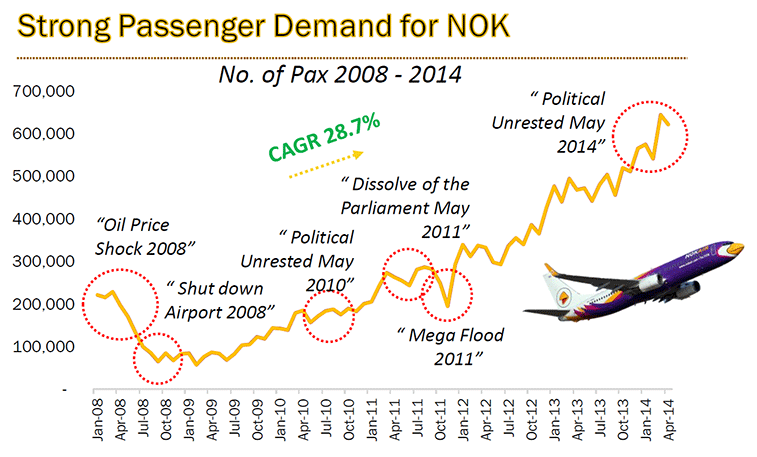 This graph from Nok Air’s most recent “Opportunity Day” presentation helpfully summarises the airline’s development since 2008, highlighting some of the key events that have impacted demand during that period.

This summer, the airline is operating 22 domestic routes from DMK with Khon Kaen the newest destination launched on 1 July with double-daily flights. A total of 16 routes are served with at least two daily flights. Only three destinations (Mae Sot, Nan, Sakon Nakhon) are not served by any other carrier from either of Bangkok’s two airports, though AirAsia announced this week that it planned to start service to Sakon Nakhon from the beginning of October. Competition in the Thai domestic market is provided primarily by Bangkok Airways, Thai Airways and Thai AirAsia. 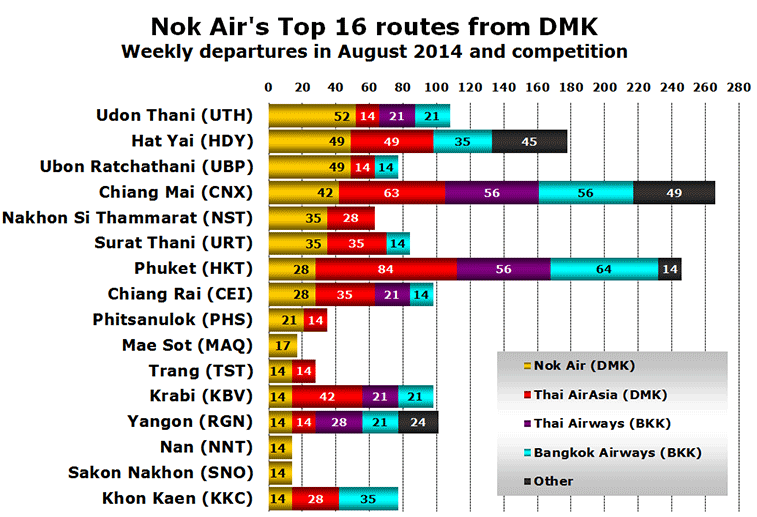 According to analysis of Innovata / Diio Mi schedule data for August 2014, Thai AirAsia has 28% of the Thai domestic market (in terms of weekly seats) followed by Nok Air (25.4%), Thai Airways (22.1%) and Bangkok Airways (17.8%). The latest carrier to enter the market is Thai Lion Air which began operations last December, and now operates around 30 flights per day.

Nok Air’s only international route at present is from Bangkok to Yangon in neighbouring Myanmar. In the past, it has operated from Bangkok’s Suvarnabhumi airport to both Bangalore (India) and Hanoi (Vietnam), while regional routes from Mae Sot to Yangon and Mawlamyine were operated over the recent winter season. However, these last two were flown by SGA with Saab 340s operating under the Nok Air Mini brand.

New Q400 NextGen aircraft to be used for international expansion?

The airline’s fleet currently comprises 14 737-800s (which have replaced all of the -400s in recent years), and two ATR-72 500s which are used on thinner routes. Before the end of the year, Nok Air will take delivery of four high-density Bombardier Q400s. According to Patee Sarasin, CEO, Nok Air, “The Q400 NextGen airliner will play a major role in our domestic development, but also in our international expansion as we look at new destinations such as Myanmar, Laos and Cambodia – areas with airports not serviceable by jets but easily accessible with the Q400 turboprop.” 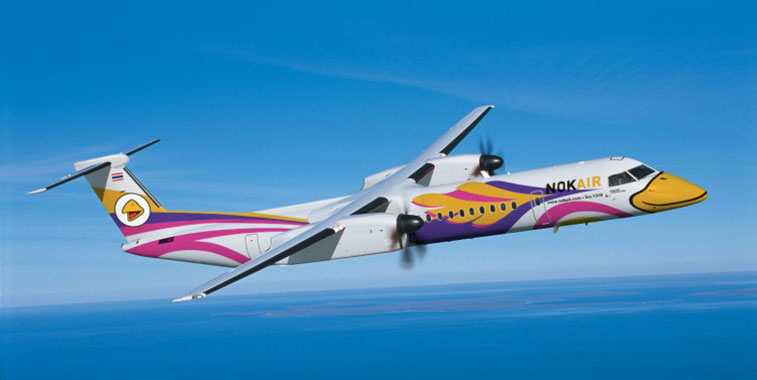 Nok Air will shortly start operating its first high-density Q400 which can accommodate up to 86 passengers. By the end of 2014 the airline will have four of the type and is potentially looking to use the aircraft to open up international routes to smaller airports in neighbouring countries.