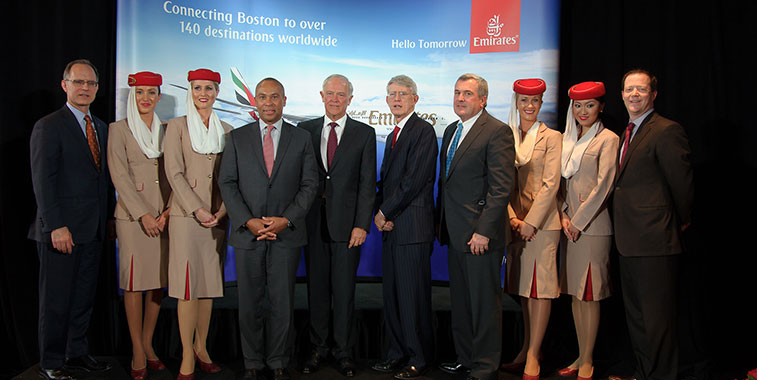 Emirates is the fastest organically-growing airline in the US international market. This August it will be offering 70% more seats than in August 2013, thanks to the introduction of larger aircraft on several routes and the addition of new routes to Boston (above in March 2014) and Chicago (due to start on 5 August).

According to IATA’s Airlines Financial Monitor (May-June 2014), US airlines notched up an impressive operating profit of $1.85 billion during the first quarter of 2014, up from $781 million in the same period of 2013. This compares with cumulative operating losses for airlines in Asia-Pacific and Europe during the same period. It is also worth highlighting that in the same report, a table of airline load factors by region shows that North American carriers have reported average load factors in the first five months of 2014 of 82.7%, notably higher than carriers in the Middle East (79.8%), Europe (78.4%), and Asia-Pacific (76.8%).

Passenger data from the US DoT Bureau of Transportation Statistics shows that in the first four months of 2014 scheduled domestic enplanements are up a modest 1.3%. In 2013 as a whole, domestic enplanements were up just 0.3% to 645.6 million, suggesting that capacity growth constraint has played a significant role in improving the profitability of the industry as a whole in the US. In 2005, 2006 and 2008 US airlines carried between 650 and 660 million passengers, while in 2007 there were almost 680 million domestic enplanements. 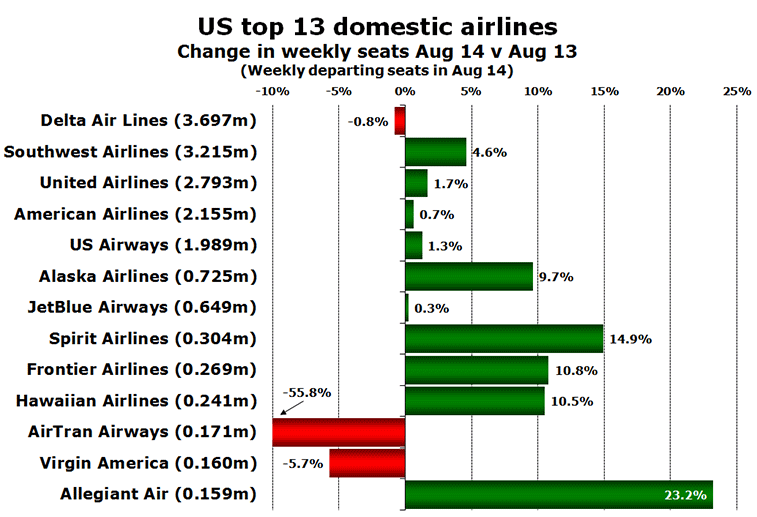 Analysis of schedule data for August shows that scheduled seat capacity on US domestic routes will be up around 0.8%, with the number of actual flights down around 2%. However, ASKs (Available Seat Kilometres) which takes into account sector length will be up around 2.7%.

Until American Airlines and US Airways flights operate under a single code, Delta Air Lines remains technically the biggest carrier in the US domestic market with almost 3.7 million weekly seats. Among the top 10 airlines, Delta is the only one which is showing a small year-on-year reduction in seat capacity. AirTran Airways coded flights are now reducing quite rapidly as integration with Southwest Airlines nears completion. The fastest-growing airline are two ‘regional’ carriers, Alaska Airlines and Hawaiian Airlines, and three LCCs, Allegiant Air, Frontier Airlines and Spirit Airlines.

International seats to/from US up almost 9%

While the domestic market remains relatively becalmed, seat capacity on international flights from the US this August is up 8.7%. The number of flights have increased by 4.9% while ASKs are up almost 10%. Of the top 16 airlines to serve the US market, just one (Air France) has seen a year-on-year reduction in seat capacity and that was very small. United Airlines, the biggest international carrier at present, was also the fastest-growing of the top six carriers. 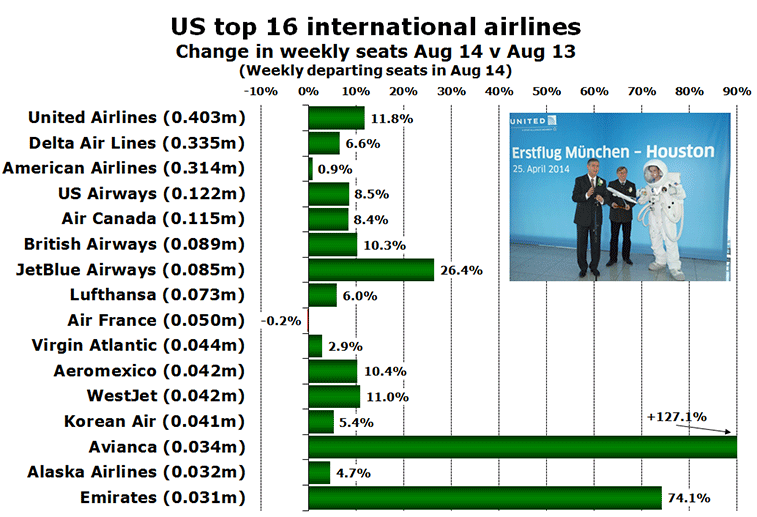 Air Canada and British Airways are the leading non-US carriers followed by three other European carriers; Lufthansa, Air France and Virgin Atlantic Airways. Korean Air in 13th is the only Asian carrier to make the table, while South America’s leading representative is Avianca, whose rapid growth can be explained by its merger with TACA. In 16th place, MEB3 carrier Emirates has grown thanks to new routes to Boston and Chicago O’Hare, as well as the use of larger aircraft on routes to Houston, Los Angeles, New York and Seattle-Tacoma.

To see our regularly updated, free, downloadable database which tracks the launch (and announcement) of new routes involving US airports, please click on the button below.