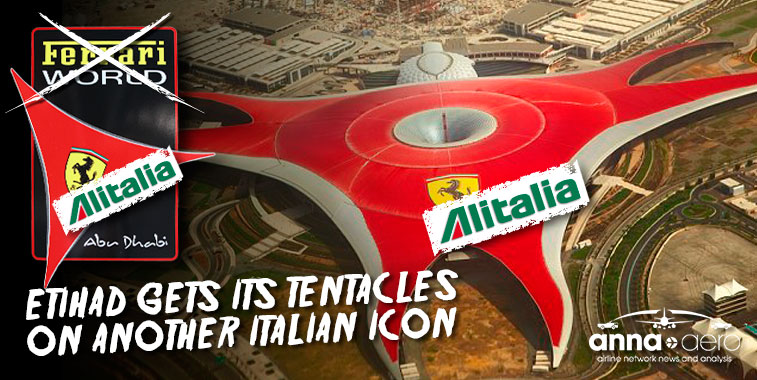 What will Etihad do with Alitalia? Alitalia has a very small long-haul network meaning many Italians end up travelling with Air France via Paris. Etihad will naturally try to direct most of this feed to Abu Dhabi – especially as Alitalia has so few Asian destinations. But, because Italy is such big, populous country, and a major industrial and tourist destination, developing new non-stop long haul routes must surely also be a significant consideration for Etihad.

As Alitalia’s tie-up with Etihad Airways looks to be nearing a final agreement, anna.aero takes a look at how the network of the Italian flag-carrier (and its subsidiary Air One) has evolved in the last 12 months. Using Innovata / Diio Mi schedule data for August 2014 and August 2013 reveals that combined seat capacity is almost unchanged (+0.6%), while the number of flights is up almost 3%.

When the numbers are broken down to an airport level, more significant variations can be seen. While capacity at the airport’s home base of Rome Fiumicino is down just under 2%, capacity at Milan Linate is up over 20% thanks to several new routes having been launched in the last 12 months. The only non-Italian airport among the top 12 is Paris CDG, which ranks at #10. If the analysis used ASKs (Available Seat Kilometres) instead of just seats, New York JFK and Tokyo Narita would rank third and fourth (after Rome and Milan Linate), with Sao Paulo (7th), Buenos Aires (8th), Los Angeles (9th) and Miami (12th) all highly ranked. 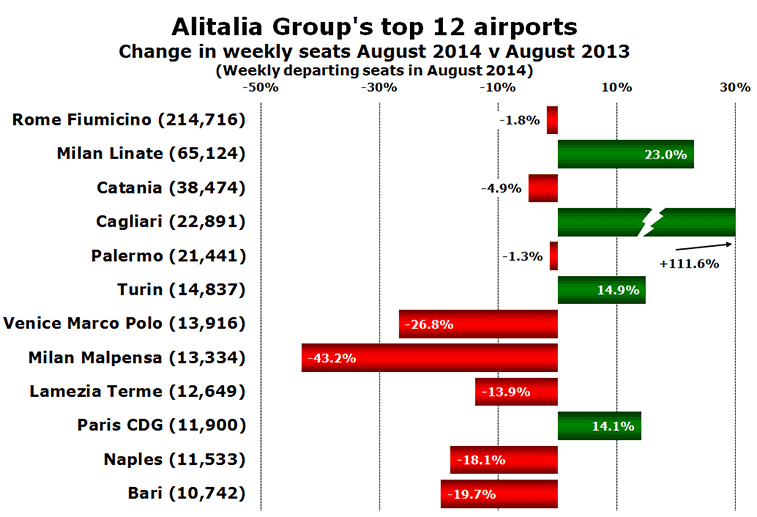 Just missing out on a top 12 place in terms of seat capacity is Tirana, the capital of Albania, where Air One is now the biggest airline, Alitalia is third, while combined they have increased their seat capacity by 90% after Belle Air’s demise in late November 2013. Cagliari Airport’s impressive growth is as a result of Alitalia increasing its operations to Milan Linate from just a single daily flight to up to nine daily flights, following Meridiana’s decision to suspend operations on the route at the end of the summer 2013 season. Meridiana also dropped its Rome service as a result of which Alitalia increased its service from seven to 10 daily flights. 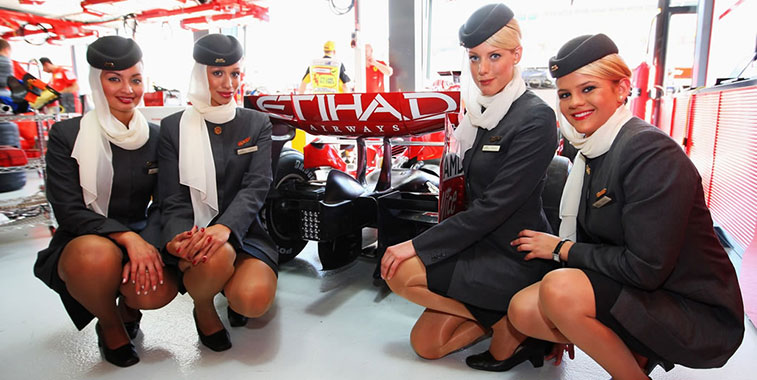 Etihad Airways has had previous experience of coming to the assistance of iconic Italian organisations. Between 2008 and 2010 the airline was a major sponsor of the Ferrari F1 team, with the airline’s name appearing prominently on the car’s rear wing during the 2008 season.

Alitalia and Air One have added a total of seven new airports to their combined networks since last August. Alitalia has added Skopje in Macedonia from Rome and Comiso, a new domestic destination, from both Rome and Milan Linate. Air One has added Düsseldorf, Lyon and Stuttgart from Catania, London Gatwick from Catania and Palermo, and Berlin Tegel from Catania, Palermo and Pisa. Alitalia resumed service from Milan Linate to Warsaw on 30 March 2014 after a gap of over four years. The four times weekly service was greeted by a special cake, ribbon-cutting and a balloon arch. Alitalia’s capacity at the downtown Milan airport is up 23% this August compared with a year ago.

Since last August Alitalia and Air One combined have ceased operations at seven airports worldwide. Alitalia has stopped/suspended Rome flights to Antalya (September 2013), Caracas (June 2014), Djerba (September 2013) Ekaterinburg (January 2014) and Tripoli (July 2014), while Air One has stopped operating to Kiev Zhulyany (from Catania) and Samara (from Venice). A total of 13 routes that were served at least daily last summer are no longer operated by either Alitalia or Air One. Sorted by Italian airport (domestic routes obviously appear twice) these are:

In terms of ASKs (Available Seat Kilometres) almost 40% of dropped ASKs are from just one route, the daily service from Rome to Caracas in Venezuela, which, with a sector length of over 8,300 kilometres, was Alitalia’s ninth longest route last summer.

Alitalia’s long-haul network (routes over 6,000 kilometres) is relatively small considering Italy’s ranking of 11th among global economies (Source: IMF) in 2013. Just 14 long-haul services are operated non-stop from Italian airports to 11 destinations, with only Tokyo Narita served from three airports. Only the Rome to New York service is served with at least two daily flights.

Japan is currently the only country served in Asia (Osaka and Tokyo) with Alitalia not operating any services to such important economies as China or India. Out of the 54 weekly flights from Asian airports to Rome, Alitalia’s two Japanese routes account for just 12 of them.