After a break of over five years, Ryanair resumed flights last September between Bremen and its home base of Dublin. Ryanair is the busiest airline at City Airport Bremen and has launched almost 50 routes from the airport, though only 25 of these are operating this summer. New services to Lisbon and Madrid are planned for this winter, plus a resumption of flights to Gothenburg. The Irish ULCC has its own low-cost terminal (E) at the airport.

City Airport Bremen became a Ryanair base in April 2007. Until then the Irish ULCC had never flown to the German airport. In the seven years since, the carrier has launched 49 routes of which 25 are operating this summer, and the carrier is the leading airline with almost 40% of weekly scheduled seat capacity during the peak summer months. 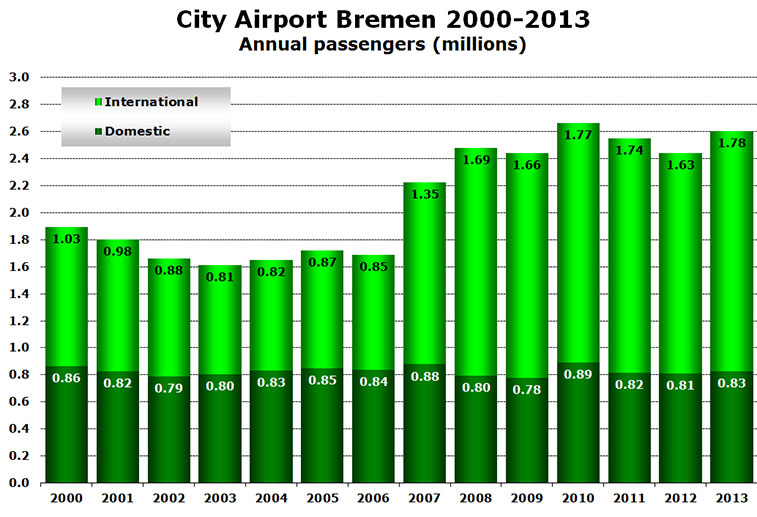 Bremen’s seasonality profile is a little unusual with a dip in August and a peak in October. The August dip can be explained by the reduction in capacity on Lufthansa’s two hub-feeding routes, which cater primarily for business traffic, though the effect of this was exaggerated by the airport’s complete closure in August 2012 for several days for runway resurfacing work. This cost the airport an estimated 39,000 passengers that month. The airport’s SVID score based on its 2013 figures is a ‘good’ 4.71. After a modest first quarter, passenger numbers in Q2 of this year have reached an all-time high, up 6.5% over 2013 Q2, helped in part by the shifted timing of Easter. For the first half of 2014 passenger demand is up 3.1%. 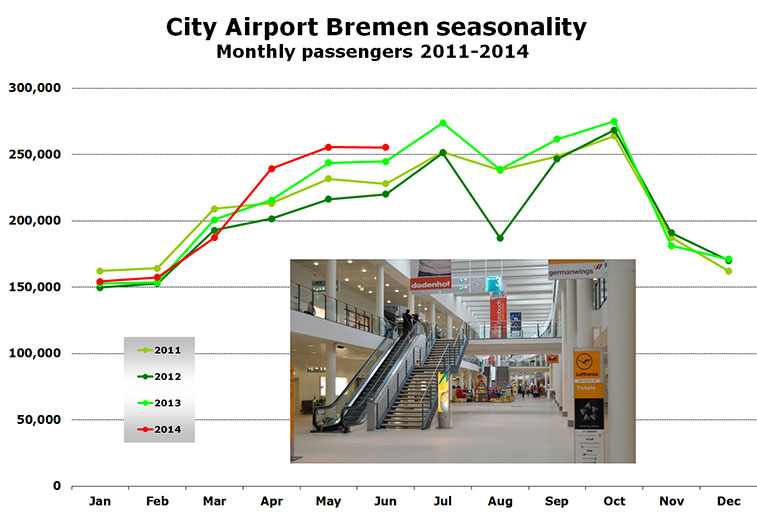 Ryanair offers by far the most weekly departing seats, accounting for almost 40% of seats (spread across 25 routes), with Lufthansa being responsible for over 25% from just two routes (to Frankfurt and Munich). Germania offers low-frequency service to a variety of mostly Mediterranean beach destinations, although its two most recent launches of year-round routes at the end of last year were to Vienna (twice-weekly) and Leipzig (also twice-weekly). 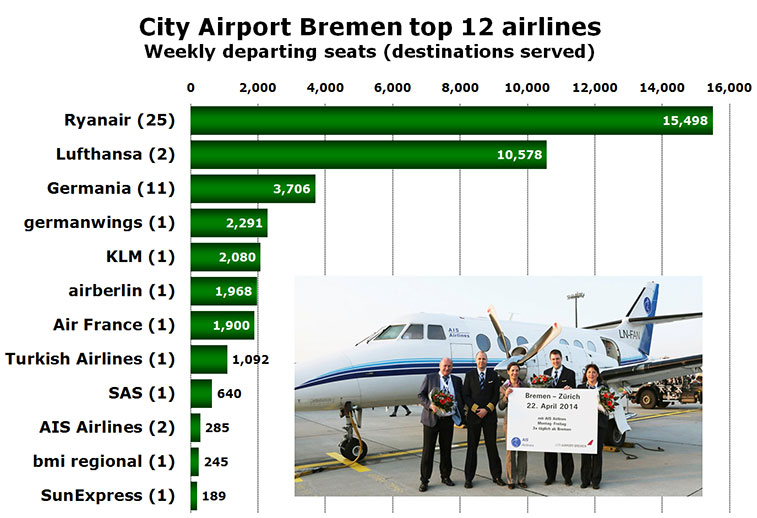 The remaining carriers at the airport can be segmented into flag-carriers serving their hubs (Air France, KLM, SAS, Turkish Airlines), regional carriers (AIS Airlines, bmi regional) and LCCs/leisure airlines (airberlin, germanwings, SunExpress). While the airport does not yet welcome any of the MEB3 carriers, since April 2012 Turkish Airlines has been operating from its Istanbul Atatürk base, a service which is now flown daily. SAS’s service to Copenhagen is a relatively new addition, having launched last October. Lufthansa’s in-house LCC, germanwings, operates multiple daily flights to Stuttgart. 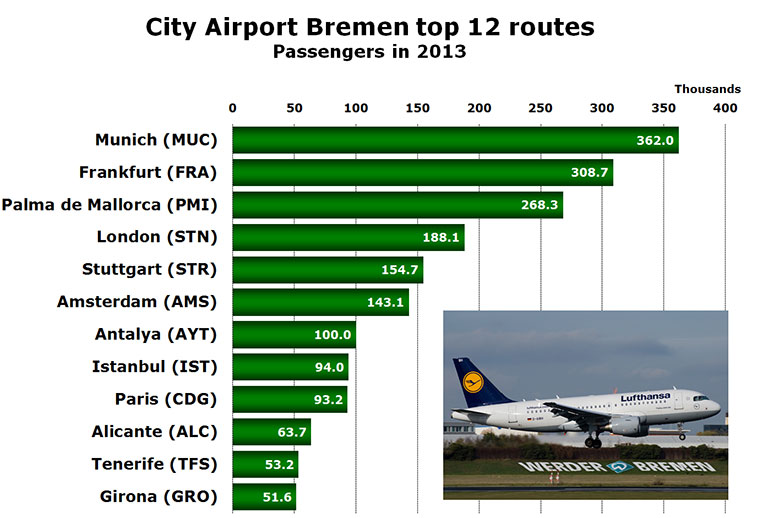 Ryanair’s rate of churn at the airport has been relatively high with only 25 of the 49 routes launched still operating. In the last 12 months, the airline has added Beziers (France), Corfu (Greece) and reinstated Dublin (Ireland), while dropping Oslo Torp, Reus and Rome Ciampino. This winter Ryanair will be resuming flights to Gothenburg while launching new services to Lisbon and Madrid.

AIS Airlines set to launch Luxembourg and Nuremberg in September

Proving that low-cost airlines are not the only source of passenger growth, Dutch-based regional carrier AIS Airlines is planning on launching two new routes in September, to Luxembourg and Nuremberg. The airline already operates 19-seat Jetstream 32s to Zurich (since April), as well as Münster/Osnabrück and Sylt (both since early July). Another regional airline serving Bremen is bmi regional, which since March 2013 has linked Bremen with Toulouse in France, a key business route serving primarily Airbus employees. After nearby Hamburg, Bremen is the second biggest German city with regard to manufacturing for Airbus aircraft.