VivaColombia grows by 20% in last year; starts its first international routes this week 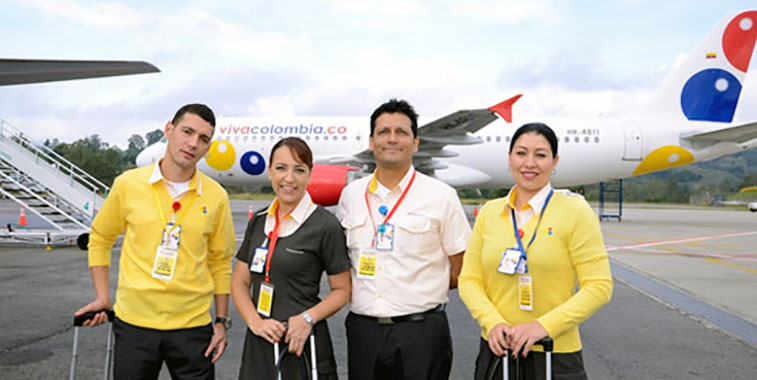 Fresh new crew from back in May 2012 when VivaColombia launched domestic operations with a single A320 from its Medellin base to Bogota and Cartagena. Since then the LCC has followed a path of measured growth which now sees the Irelandia-backed carrier operate six aircraft.

VivaColombia, which was created by serial low-cost carrier developers Irelandia in 2012, the team behind VivaAerobus, Tigerair and Allegiant Air, and the original people behind a small European concern known as Ryanair, is now entering the third year of operations and now boasts a network of around 20 city pairs. A significant milestone was achieved by the airline this week, which is the 61st biggest LCC in the world (according to Flightglobal statistics) based on passengers carried, as it started its first ever international services.

A year ago, VivaColombia featured just nine destinations across its network, all of which were domestic points. This August, its network coverage has expanded to 12 with the addition of three new cities, Panama City/Balboa in Panama (in light green), as well as the new Colombian destinations of Bucaramanga and Cucuta. This increased network coverage has meant that the airline now offers 20% more flights when compared to last August. As the LCC operates a single aircraft type across its fleet – six 180-seat A320s – the number of seats has also grown by the same amount. 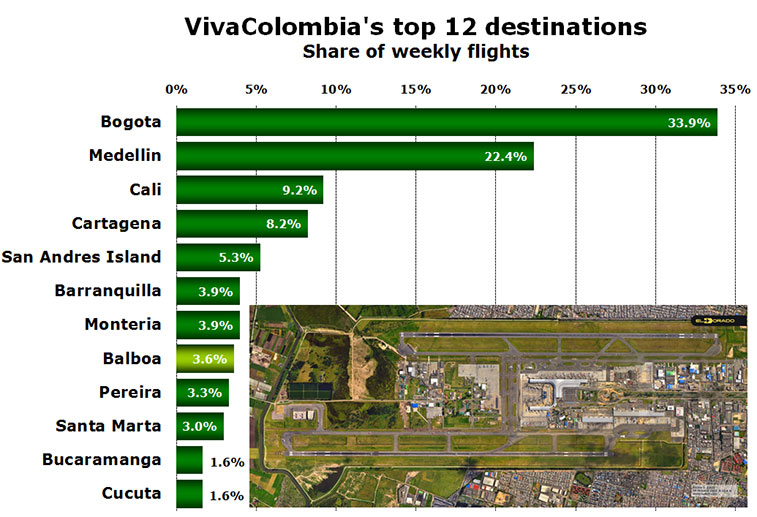 Although originally launched as a Medellin-based airline, VivaColombia has undergone a radical shift in its flying programme over the last 12 months. Last August, Bogota represented less than 20% (49 weekly flights) of the LCC’s weekly flying, however this summer it has doubled its programme from the Colombian capital, now offering over 100 weekly flights or over one-third of the airline’s operational schedule. By contrast, its former most significant operational base of Medellin has seen its share drop from 38% (96 weekly flights) to 22% (68 weekly). The cuts coming from the network planning department are actually in terms of frequency rather than a destination cull, as despite these cuts to flights, VivaColombia has actually increased the number of points it serves from Medellin up to eight from seven this August.

Over nine in 10 flights domestic

Currently 93% of the airline’s flying programme is operated domestically within Colombia, with the only international routes being the LCC’s most recently launched services from Medellin (four times weekly) and Bogota (daily) to Panama City/Balboa in Panama (in light green). By coming down to this more micro-level, VivaColombia’s network overhaul becomes more apparent. The airline has launched four new routes from Bogota in the last year — namely to San Andres Island, Barranquilla, Balboa and Pereira — and has also increased the number of seats to Cali by 80% and by 71% to Cartagena from the capital city. By contrast, seats and flights of top 11 routes from Medellin to Bogota (-19%), San Andres Island (-36%), Cali (-30%), Monteria (-36%) and Cartagena (-40%) have all seen a drastic capacity realignment. 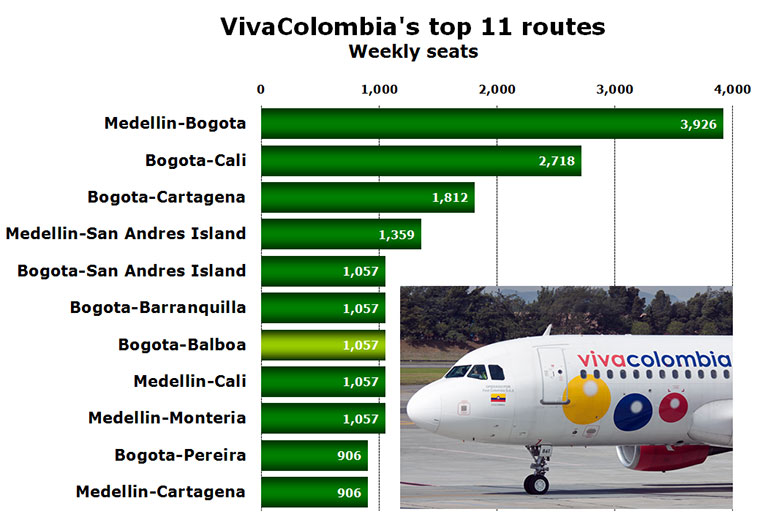 All of the airline’s top 11 routes involve either Medellin or Bogota, in fact its biggest city pair which does not involve either of these bases is its four times weekly operation between Cartagena and Pereira. At the time of writing, there are no new services planned for VivaColombia for any of S14, W14/15 or S15 seasons, according to anna.aero’s New Route Database. However, a link from Bogota to Lima in Peru has been mooted for later this year.