Busy, busy, busy. Seen here at Atlanta and Palm Beach airports over recent weeks, these are two of the five routes (as well as Boston, Pittsburgh, and New York Newark) launched by PEOPLExpress Founder and COO Mike Morisi (centre of both images). He will continue to clock-up the air miles later this month as he launches new routes to New Orleans and St. Pete-Clearwater.

Some 27 years after the original airline folded, the name PEOPLExpress is back in the air, this time based at Newport News Airport (PHF), VA and not New York Newark — although the New Jersey airport was one of the initial three routes (along with Boston and Pittsburgh) started on 30 June. With two further routes launched to Palm Beach (14 July) and Atlanta (1 August) and two more to come this month, New Orleans (28 August) and St. Pete-Clearwater (29 August), the airline is offering mix of business and leisure destinations. Officially one of the busiest in people in the US airline industry at the moment as the LCC ramps-up its initial operations with its two 150-seat 737-400s, we get 30 seconds with PEOPLExpress’ Founder and COO Mike Morisi to find out stage two in the airline’s plans.

anna.aero: It’s been a frantic few weeks for you – what’s been your biggest high and your deepest low in that time?

Mike Morisi: The greatest high has of course been seeing our first flight of customers take off. It’s truly a dream come true and there is no way to appropriately explain how emotional it is to see the culmination of years of hard work all come to that moment. Honestly, I get the same feeling every time I watch one of our flights take off. Another real high for me is watching our Customer Service Managers work. We took a group of excited passionate people, trained them quickly in the airline business and threw them into the deep end of the pool and they are amazing to watch. The family feeling we have here among nearly 100 people makes it a fun place to be. We have a team of senior leaders who practice servant leadership every day and it has permeated the entire family. (When pushed for a low, Morisi replied) Nope. No lows. Having a blast.

MM: We are talking to Vision [Airlines] about adding additional aircraft for the winter and have selected five more cities — so stay tuned. Some may surprise you…

aa: Would you consider international routes from PHF? Cross border to Canada or into the Caribbean or Mexico perhaps.

MM: Absolutely — we will consider that, but we really want to prove our concept and then crawl, walk, run. No need to expand too fast or outside of our niche. There is plenty of untapped opportunity here.

aa: Is there a finite size to the PHF market (in terms of destinations and/or aircraft)?

MM: There are about a dozen markets we see potential for from here, some on a less than daily operation. We also see PHF as a solid spot for a small “hub” operation connecting customers from the northeast to southern markets. We have an exclusive terminal so connection times can be short and quite frankly, the best crab cakes in our café you have ever eaten. 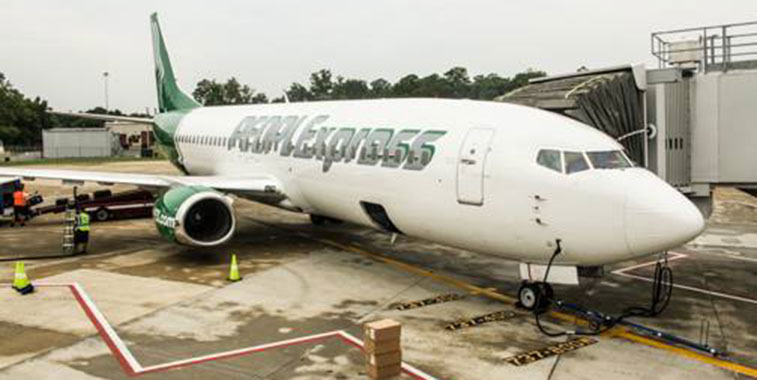 Coming to an airport near you? PEOPLExpress reckons a network of at least 12 destinations are possible from its Newport News base. It wouldn’t rule out international destinations or replicating its business model at other smaller community airports either.

aa: Are you planning to bring the PEX brand to other smaller community markets like PHF?

MM: We have identified several possible focus cities where we can replicate our operation here.

aa: Where will this start-up succeed, where Vision’s previous efforts at Destin/Fort Walton and Myrtle Beach failed?

MM: I don’t know much about Vision’s operations in the past. I believe they launched with 30+ cities and an aggressive utilization plan that may have been a little too aggressive.  We have found the Vision team to be very solid professionals and we have a positive relationship with them.

aa: Would you say that the PEX business model is closest to Allegiant, Southwest or JetBlue? Or are you creating your own business model?

MM: Maybe the best of each of them.

aa: Would you advocate the use of a former famous airline brand as the name for a start-up?

MM: I’m not sure. I believe PEOPLExpress was an iconic brand that was merged into Continental and not one customer got stranded or cancelled. Very smooth transition.