Aegean Airlines is the only Greek airline member of the AEA since it absorbed Olympic Air. The launch of flights between Athens and Abu Dhabi on 28 May helped make the carrier the fastest-growing AEA member on routes between Europe and the Middle East. Despite the presence of the MEB3 carriers (Emirates, Etihad Airways and Qatar Airways) the Middle East is the fastest-growing geographic market for AEA’s 27 passenger airline members in the first half of 2014, with demand up 8.0%.

The Association of European Airlines (AEA) comprises 27 European passenger airlines (mostly flag-carriers, but also airberlin and Virgin Atlantic Airways) as well as three cargo airlines (Cargolux, DHL and TNT). In the first six months of this year, passenger traffic for these airlines has risen by 3.3% compared with the same period in 2013. Overall load factor has improved by 0.3 percentage points to 79.3%. 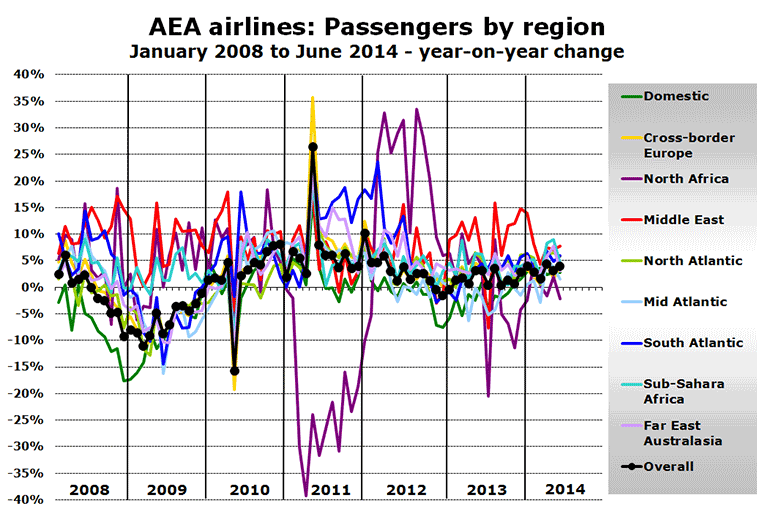 Since the beginning of 2010, this group of airlines combined has reported growth every month with the exception of April 2010 (the Icelandic ash cloud), and the three-month period from November 2012 to January 2013. However, a look at individual geographic regions shows much greater volatility. The Arab Spring of 2011 heavily influenced traffic trends to North Africa during 2011 and 2012 and the last 12 months have remained challenging for airlines serving that region. Domestic traffic, which has shown little growth for several years, was up 2.9% in the first half of 2014, bettering the 2.7% growth seen on cross-border Europe routes, where Europe’s LCCs (which are not members of the AEA) are key competitors.

In 2014 the fastest-growing geographic market has been the Middle East with passenger growth of 8.0% to 5.64 million in the period January to June, while load factors have improved by 2.3 percentage points to 74.7%. According to anna.aero’s analysis of Innovata / Diio Mi schedule data for June 2014 and June 2013, several European flag-carriers have significantly increased their capacity between Europe and the Middle East, including Aegean Airlines (+68.9%), Brussels Airlines (+29.8%), Iberia (+27.3%), Alitalia (+12.0%) and Turkish Airlines (+11.6%).