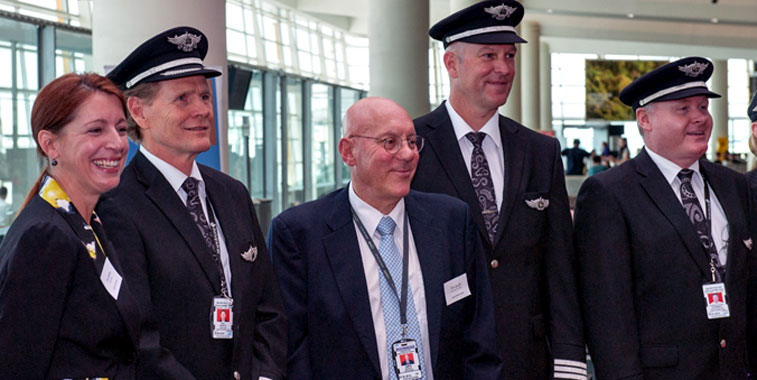 The last route that Air New Zealand launched was a twice-weekly seasonal link between Christchurch and Perth, which operated between 3 December 2013 and 26 April 2014. As a result of the carrier’s strategic partnership with Singapore Airlines, Air New Zealand is mooted to be starting an Auckland to Singapore service in December, complementing the former’s existing 12 times weekly operation.

The deal should also see Air New Zealand start a new service from Auckland to Singapore from December (start date uncertain at this time), a route resumption after an eight-year hiatus, which will complement Singapore Airlines’ existing 12 weekly service. This partnership, along with the recent delivery of Air New Zealand’s first 787-9, will see the Star Alliance carrier in good shape for the future.

Air New Zealand’s passenger volumes have been in recovery-mode since the global traffic dips of FY2009 and FY2010, however the carrier’s load factors have been on a clear growth trajectory that have seen a near 10-point increase since FY2006 (It should be noted that Air New Zealand’s financial year’s end on 30 June). While the Star Alliance carrier’s short-haul passengers (comprising of domestic and Tasman and Pacific islands traffic) have shown solid improvement over the period, the carrier’s long-haul retrenchment is clearly evident. 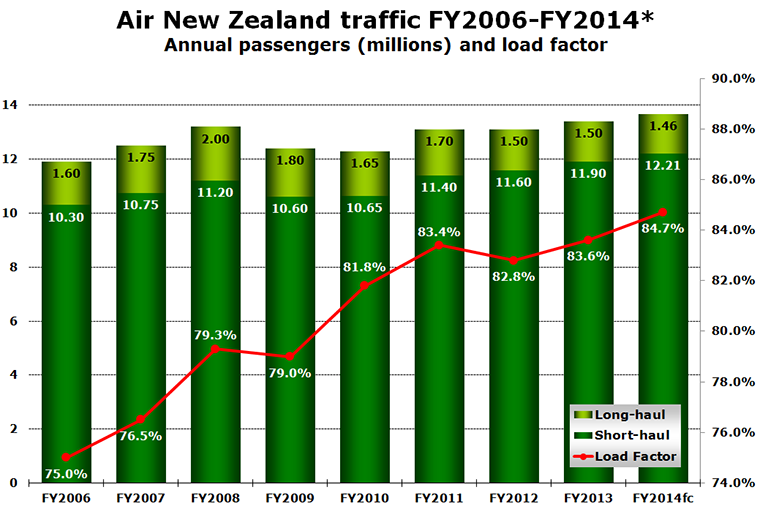 Referring to the airline’s interim results (six months up to end of December 2013), total traffic is up 2.0% from 6.79m to 6.93m, with loads having improved by 1.1% over the same period from 83.2% to 84.3%. Domestic traffic, up 2.7% from 4.35m to 4.47m, and Tasman and Pacific islands’ passengers up 2.4% from 1.66m to 1.7m, are driving this growth, with international traffic still being consolidated, falling 2.7% from 785,000 to 764,000. The airline’s exit from poorly performing routes of Auckland to Osaka Kansai, along with Hong Kong to London, were the main reasons for this traffic decline. Air New Zealand remains on course to break 13.5m annual passengers for the first time in FY2014, according to anna.aero forecasts.

60% of seats and flights from Auckland, Wellington and Christchurch

The airline’s total seats have grown by 2.3% between August 2013 and August 2014. Unsurprisingly, services from Auckland dominate Air New Zealand’s top 12 destinations, with the top three airports of Auckland, Wellington and Christchurch offering a combined 60% of seats (61%) and flights (57%). Eight of the top 12 destinations are in New Zealand, the remaining four are international and are led by Sydney which is served with 62 weekly flights, split across six airports – Auckland (31), Wellington (10), Queenstown (10), Christchurch (eight), Norfolk Island (two) and Rarotonga Island (one). The top 12 airports constitute 83% of weekly seats and 79% of weekly flights. 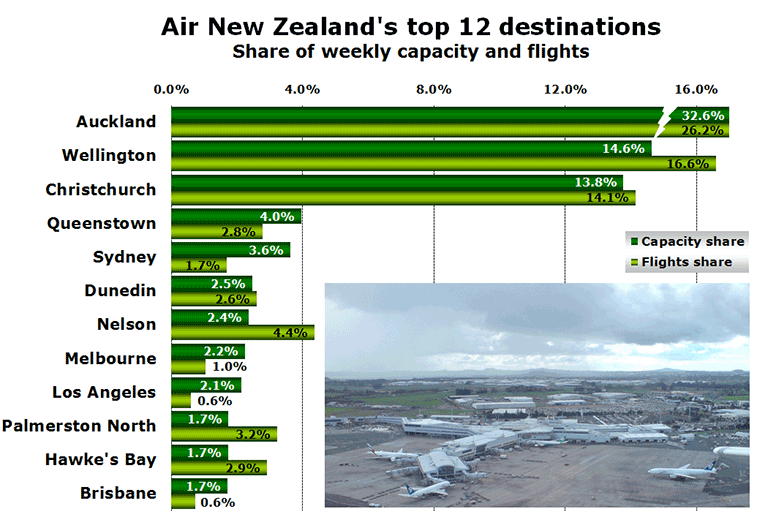 Although there have been some positional switches (Dunedin and Nelson; Hawke’s Bay and Brisbane), the top 12 destinations have gone unchanged over the last 12 months. While Christchurch (+3.7%) leads the way in terms of extra weekly seats from the top three airports, it is the #4 destination of Queenstown that has increased the most dramatically from the top dozen, with a double-digit spike (+12%) since last August. The biggest fall in capacity was felt at Nelson, which has declined by 6.1% in the past year.

Four of top 12 routes are international

Air New Zealand’s total network currently covers 51 cities, evenly split between international (26) and domestic (25), with the top 12 routes commanding nearly half (49%) of the airline’s total seats. Despite some capacity tweaks, the top 8 routes operated by Air New Zealand have gone unchanged in the last 12 months. The #1 airport pair, the 480-kilometre domestic hop between Auckland and Wellington, which is flown up to 20 times daily, has seen a marginal 1% increase in weekly seats since last August. The international route which has witnessed the largest growth in the last 12 months is the #4 route overall, the Auckland to Sydney city pair, increasing seats by 7.2% year-on-year. 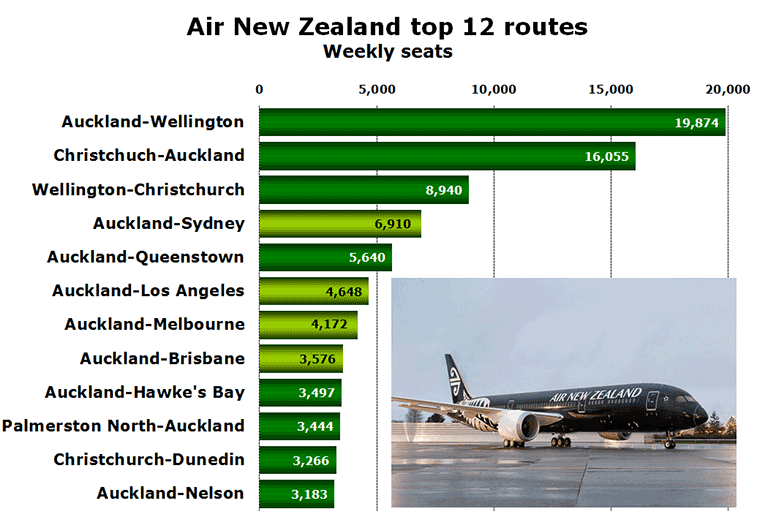 The sector with the biggest annual growth of the top 12 routes is domestic, namely the Auckland to Hawke’s Bay service, which has increased by 313 weekly seats or 9.8%. In comparison, the Palmerston North to Auckland sector, again a domestic route, has encountered the largest annual drop in capacity, with a 144-seat or a 4% annual decline.