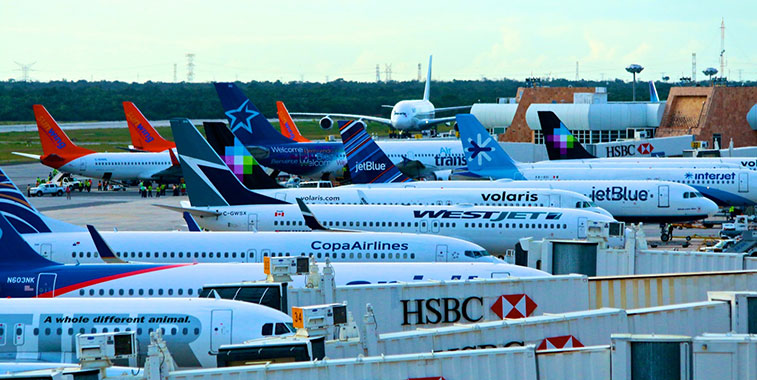 How many airlines can you spot? Cancun International Airport is a popular leisure destinations for locals and foreigners, especially those from the US and Canada. No airline accounts for more than 15% of capacity at the airport, with local LCC Volaris leading the way.

Cancun International Airport this week welcomed the first ever flights from Southwest Airlines, as the Dallas-headquartered airline replaced services offered by its subsidiary AirTran Airways from Atlanta, Baltimore/Washington and Milwaukee. Further routes will be taken over in October (Denver) and November (Austin-Bergstrom and Chicago Midway). While Southwest’s arrival is not adding much in the way of new seat capacity, Mexico’s second busiest airport has had a good decade overall, with passenger numbers doubling between 2002 and 2013. After a post-recession dip in 2009, demand at Cancun Airport has grown by 43% in the last four years as international leisure traffic has boomed. 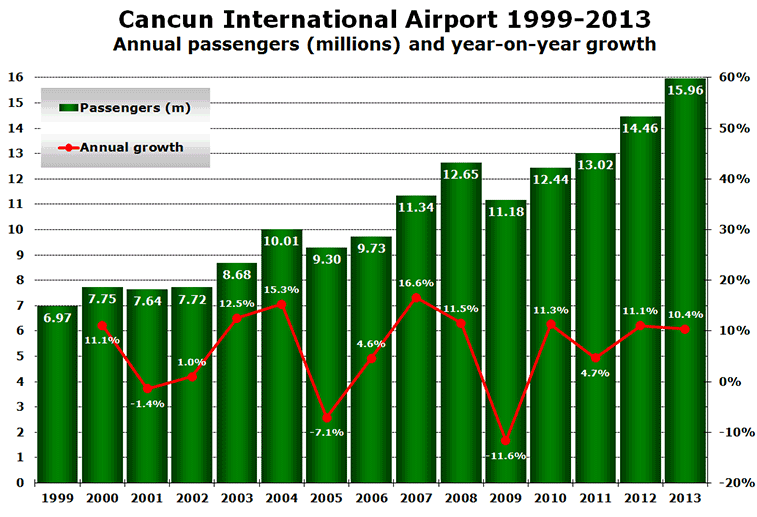 The airport’s domestic and international services have quite different seasonality profiles. The domestic market follows a smoother trend through the year with a peak in July when Mexicans head for the leisure resort. However, international traffic (predominantly from the US) peaks in March (spring break) and dips dramatically in September, a pattern reminiscent of several Florida airports. For total traffic, the airport produces a SVID score of just 2.40. So far in 2014 (January to July) total traffic is up a further 7.5% with international traffic up 8.5% and domestic traffic growing by 5.1%. 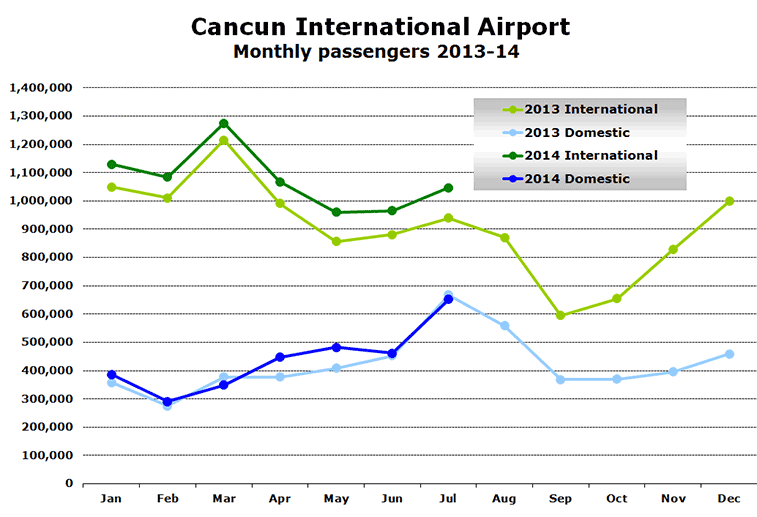 Volaris leading airline but US carriers are growing fastest

No single carrier dominates at Cancun with Volaris currently the leading airline with 154 weekly departures in the peak month of June. However, this only represents 12.4% of total flights. Four Mexican carriers (shown in light green) are among the six busiest airlines at the airport, but second ranked United Airlines (+34.7%) and seventh ranked Delta Air Lines (+46.7%) are the two fastest-growing carriers among the airport’s top 14 airlines. For both carriers this growth has been achieved primarily through an increase in weekly flights on existing routes rather than any new services. A total of 39 carriers currently operate scheduled services at the airport including Air Canada, Air Europa, airberlin, Avianca, British Airways, Cubana and Virgin America. 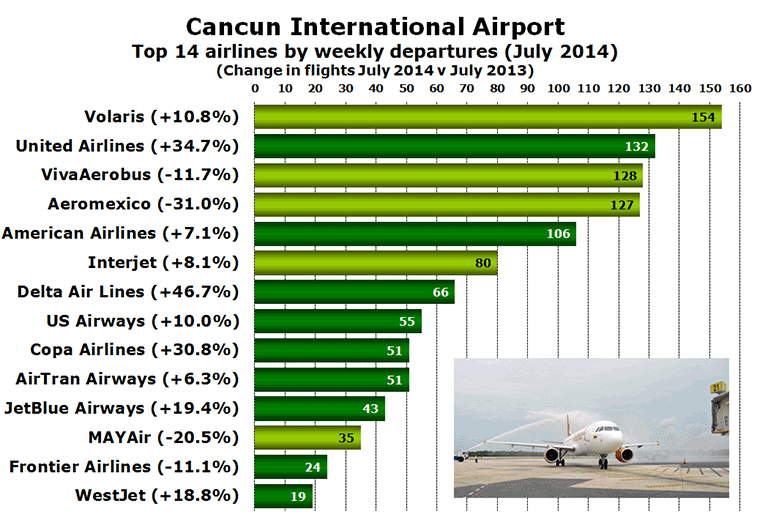 With many routes operating seasonally it can be hard to identify genuine new routes, but according to anna.aero’s New Route Database a number of new seasonal services to Europe were launched last winter, including weekly flights from Munich with Condor, twice-weekly flights from Hamburg with TUIfly, while Evelop Airlines of Spain began twice-weekly flights in March 2014 from Madrid. Other new international services planned to start in the coming months include Alaska Airlines to Seattle-Tacoma (starting 6 November) and Frontier Airlines to Washington Dulles (starting 22 November).