While it is home to an estimated population of 5.5 million, Finland covers an area of almost the size of Germany, making it the most sparsely populated country in the European Union. Considering the majority of the population is concentrated in the southern regions of the country, there is no surprise that Finland’s main gateway at Helsinki commands the majority of Finnish traffic, having recorded over 14 million passengers in 2013. However, according to Finavia, Finland currently offers another 24 commercial airports providing scheduled airline services that handled a combined 3.7 million passengers last year. Overall, Finnish airports have decreased their combined annual passengers by a modest 0.4% since anna.aero last looked at this country market three years ago. 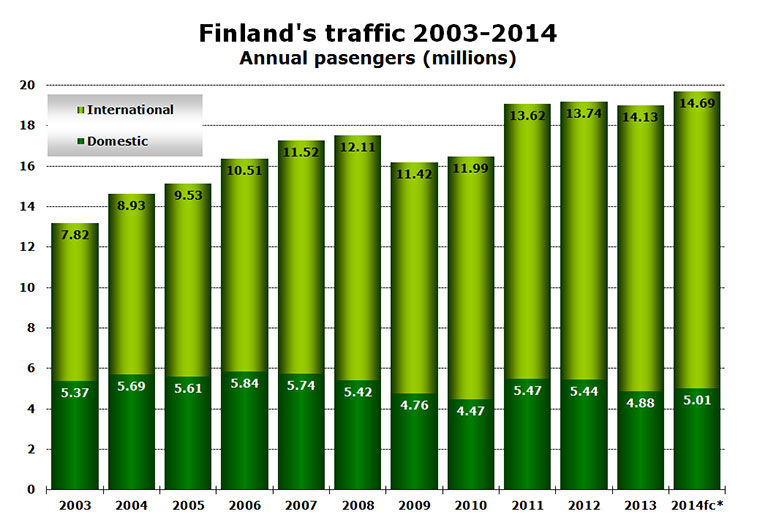 Looking at passenger data between 2003 and 2013, the combined traffic of the 25 Finnish airports grew with an average annual growth rate (CAGR) of 3.4%, with the international market outperforming the domestic sector. Noteworthy is the fact that the international air travel has almost doubled, while the domestic one has recorded 9.2% decline last year when looking back 11 years to 2003. In addition, Helsinki’s share of the country’s air traffic has actually increased from 74% in 2003 to 80% in 2013, as Finnair continues to attract connecting traffic, in particular on flights from Europe to Asia.

In the first seven months of 2014, for which traffic data is already available, the Finnish airports noted an increase of 3.6% (2.6% — domestic, 3.9% — international) when compared to the corresponding period of 2013, with over 11 million passengers achieved until end-July. If the country’s traffic continues on this growth trajectory, it will achieve a new record high in 2014 — close to 20 million passengers, based on anna.aero forecasts.

Looking at Innovata schedules for this August, the top 12 carriers serving the Finnish market account for 94% of all weekly seats on international operations, 1% fewer that in the corresponding month of 2013. The flag carrier, Finnair remains by far the dominant carrier on international flights, as it commands 58% of the market, being almost five times bigger than the second operator, Norwegian. The oneworld member, which carried 9.3 million passengers in 2013 (growing by 5.6%), operates a total of 57 international routes from Helsinki, of which the 399-kilometre airport pair to Stockholm Arlanda is the most frequently flown route (45 times weekly). In addition, Finnair has recently commenced operations to its sixth destination in Russia with the addition of thrice-weekly flights from its Helsinki hub to Samara.

Following the opening of a new base at Helsinki in March 2011, Norwegian operates 21 routes from Helsinki and one each from Oulu, Turku and Vaasa as of August 2014. The only domestic links, on which there is genuine competition in Finland, are Helsinki-Oulu and Helsinki-Rovaniemi, both of which are served by Finnair and Norwegian. Overall, a total of five low-cost carriers (Norwegian, Ryanair, Vueling, Wizz Air and germanwings) are serving the Finnish market with easyJet and Pegasus Airlines being the most notable absentees. 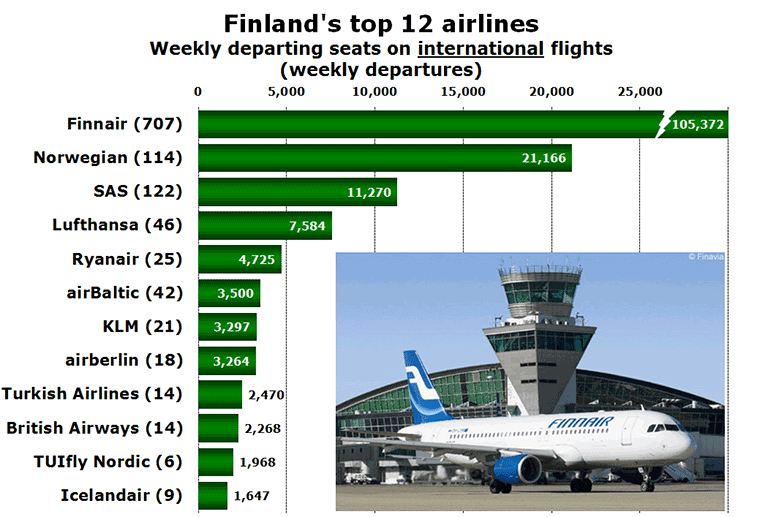 Total international weekly seat capacity in Finland has gone up 0.3%, with four out of the top dozen airlines recording growth (when comparing data from this August with the same week last year), while KLM and British Airways saw their operations unchanged. A new entrant into this year’s ranking, Icelandair is also the fastest growing carrier, managing to increase its weekly capacity by 29% over the last 12 months. The Icelandic airline has added two further weekly flights on the 2,453-kilometre sector from Reykjavik/Keflavik to Helsinki, up to nine times weekly. By comparison, Lufthansa, experienced the greatest capacity decline (-18%), due to dropping the Helsinki-Düsseldorf airport pair and transferring its Helsinki-Berlin Tegel operations to its low-cost subsidiary — germanwings.

While the domestic sector is Finland’s largest market accounting for 29% of all weekly seats, a total of 42 countries can be reached non-stop from Finnish airports according to Innovata schedule data for this August. At over 22,500 weekly seats, and 8.7% more than in August 2013, neighbouring Sweden is the dominant international market, being served by five carriers (NextJet, Finnair, Norwegian, Flybe Nordic and SAS) with a combined 214 weekly flights from Kokkola, Mariehamn, Pori, Vaasa, Oulu, Turku and Tampere. 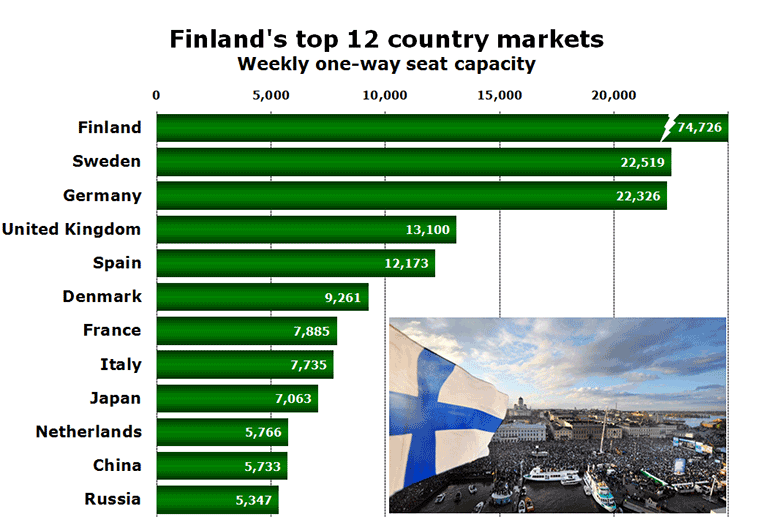 A new entrant into this year’s ranking, Russia has shown the most significant growth in weekly capacity, 46% or an additional 1,686 seats. Besides the thrice-weekly flights added to Samara on 7 August, Finnair commenced operations from Helsinki to Nizhny Novgorod and Kazan over the last 12 months. In addition, on 26 April, S7 Airlines helped Helsinki to secure its third serving airline to Moscow, with daily operations to Moscow Domodedovo (the other two carriers serving the Russian capital being Aeroflot and Finnair, both flying to Moscow Sheremetyevo). On the other hand, Denmark is the only country market featured in this year’s ranking that noted capacity decline (-4.1%), due predominately to the loss of SAS’ six weekly services from Turku to Copenhagen.