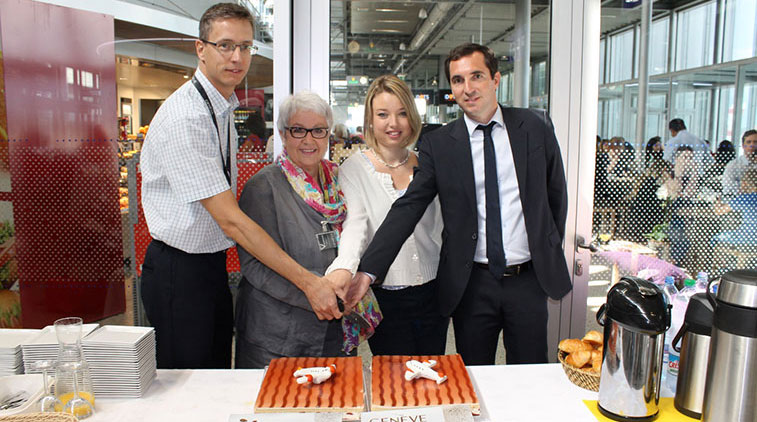 Established in 1919 as a local airport in Cointrin, Geneva Airport is the main gateway to the second most populous city in Switzerland. While the city has a population of around 195,000, Geneva’s two-hour catchment area extends to three countries — Switzerland, France and Italy — and no fewer than six million people. The airport, which is currently ranked as the country’s second busiest gateway according to 2013 traffic figures (behind Zurich, but above Basel and Bern), is operated and owned by the City of Geneva and serves as a base for easyJet (since 1999) and the relatively new Etihad Regional (since 2003, while operating under flybaboo brand).

Furthermore, due to its proximity to the Swiss-French border, Geneva can be accessed from both countries, making the airport a European Union hub even though Switzerland is not a member of the EU community. Examination of Innovata schedule data for this August indicates that the airport’s summer programme includes over 110 non-stop services operated to 44 countries within Europe, North America and the Middle East. 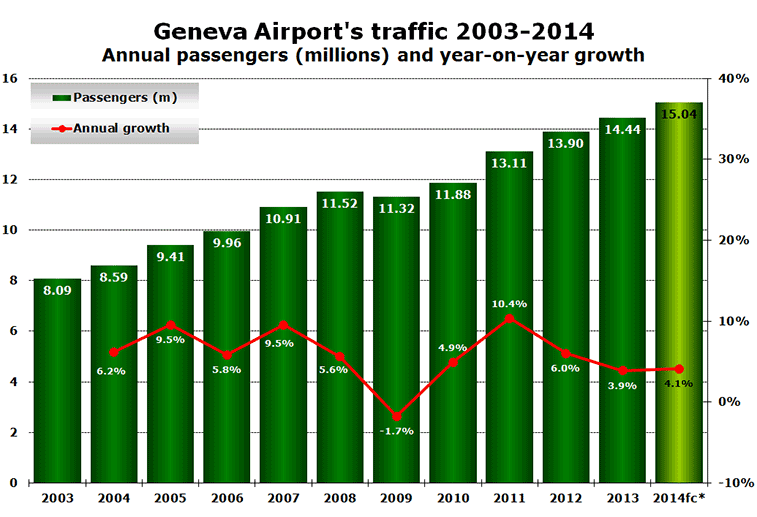 Analysis of data facilitated by the airport authority reveals that passenger traffic at Geneva has grown impressively between 2003 and 2013, with an average annual growth rate (CAGR) of 6% over this timeframe. The airport handled over 14 million passengers in 2013 (a new record high), a number that increased from the 8.1 million recorded 11 years ago. In addition, looking back 12 months to December 2012, the airport’s traffic increased by almost 3.9%. Overall, Geneva experienced growth since 2003, with the exception of 2009, when it posted a modest decrease of 1.7% due to European economy shrinking. In the first six months of 2014, for which traffic data is already available, the airport noted an increase of 4.1% when compared to the corresponding period of 2013, with 7.7 million passengers achieved until end-June. If Geneva continues on its existing 2014 growth trajectory, anna.aero predicts that it will surpass the magical 15 million passenger figure this year.

Entering Geneva’s monthly passenger data for 2013 into anna.aero’s Seasonal Variation in Demand (SVID) calculator, the airport performs exceptionally well, producing a score of 1.17, an “excellent rating”. With a total of 45 seasonality performance evaluations completed so far this year, Geneva has entered the rankings at position #8, between Brasilia (1.11) and New York Newark (1.19). To give Geneva a fair evaluation, we also ran calculations on Zurich (2.12 — good) and Basel (4.18 — good). Against its airport peers from Switzerland, the airport performs better than both the significantly larger Zurich (25 million annual passengers) and the country’s third busiest gateway — Basel (5.9 million).

Geneva’s seasonality profile may look like the nearby mountain ranges, but in fact reflects the varied nature of demand. In winter, ski traffic descends on the region while business traffic to the many international organisations with headquarters in the Swiss city assures a good year-round underlying demand. In summer, there is also a peak as locals go on holiday and hikers come to take advantage of the pleasant scenery nearby.

easyJet dominates with 36% of seats

While a total of 50 carriers operate from Geneva, the top dozen airlines command over 81% of all weekly seats this August (1% fewer that in the corresponding month of 2013). Since opening its first continental base in 1999, easyJet has grown impressively at Geneva. Therefore, the UK low-cost carrier is the biggest operator this summer, as it controls 36% and 31% of weekly seats and flights respectively. easyJet operates on a total of 51 routes from Geneva for S14, of which London Gatwick is the most frequently flown destination, being served six times daily. 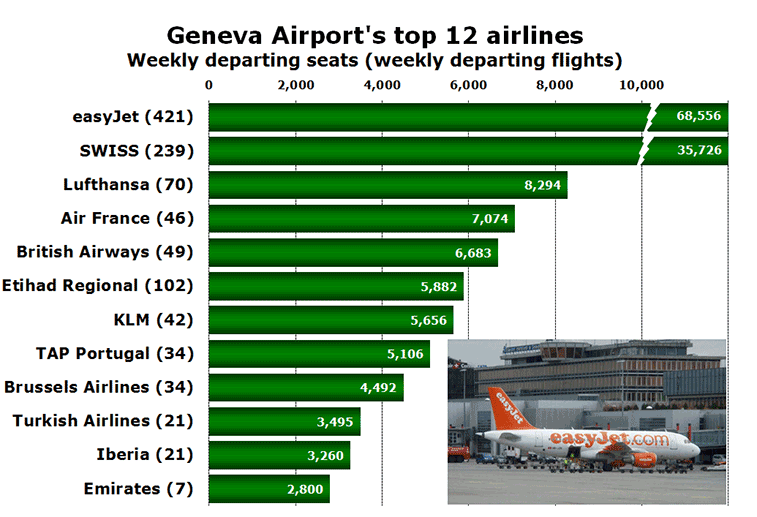 Weekly seat capacity for this summer has gone up 7%, with nine out of the top dozen operators noting capacity growth, when comparing data from this August with the same week last year. Formerly known as Darwin Airline, Etihad Regional is the fastest growing operator with an annual increase in weekly seats of 85% or 2,694 additional seats, coming as a result of commencing flights to Bordeaux, Calvi, Düsseldorf, Leipzig, Marseille, Nice, Stuttgart, Toulouse, Verona and Zurich over recent months. By comparison, following the withdrawal of operations to Düsseldorf, Hamburg and Berlin Tegel, Lufthansa has trimmed a total of 3,704 weekly seats (-31%) from its summer schedule. This comes as a result of the Star Alliance member having taken the decision to only operate intra-European flights from its Frankfurt and Munich hubs, and transfer all other services (including the Geneva-Hamburg and Geneva-Düsseldorf) to its low-cost subsidiary, germanwings.

Heathrow continues to be top airport

Even though seat capacity to London’s main gateway has been reduced by 1.1%, London Heathrow is still the top airport operated from Geneva in 2014. At 755 kilometres away, Heathrow is served by both British Airways and SWISS with a combined 83 weekly flights from the second busiest airport of Switzerland. This is closely followed by operations to Zurich, which has managed to reduce the gap when compared to data from the same week last year, as weekly seat capacity has grown by 2,495 or 30%. On the other hand, four of the top dozen destinations saw capacity fall this summer, with the 1,010-kilometre sector to Madrid having experienced the greatest decrease (-19%). 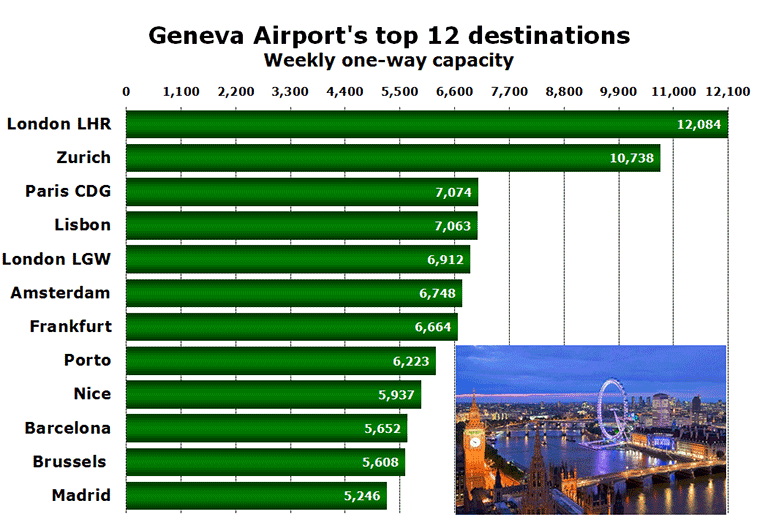 Overall, the top 12 destinations represent 44% of the total market, which is slightly down from the 46% recorded for the same week 12 months ago. Noteworthy is the fact that the London market is served through five airports from Geneva, namely Heathrow, Gatwick, London City, London Luton and London Southend with a combined 164 weekly flights. 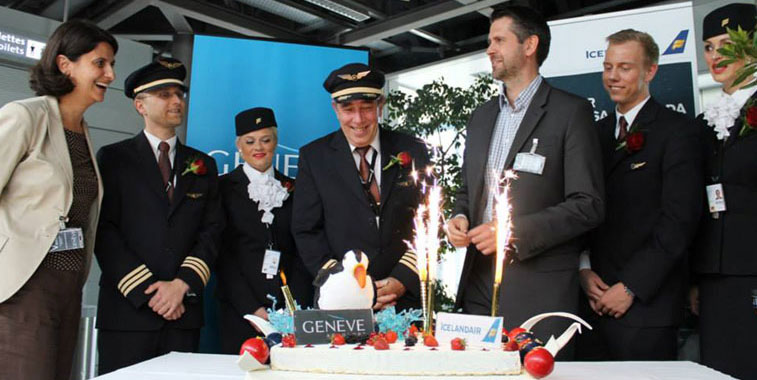 On 24 May, Icelandair landed at Geneva from Reykjavik/Keflavik with twice-weekly flights operated until 23 September. The 2,649-kilometre sector to the second most populous city in Switzerland is the carrier’s second route to this country market, the other link being flown to Zurich.