Hainan Airlines grows seats by 7%; Beijing biggest base in terms of flights and destinations served 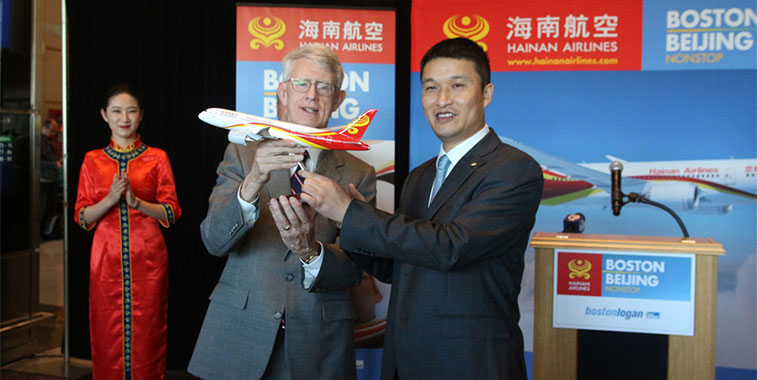 Hainan Airlines made Boston its third US destination (after Chicago O’Hare and Seattle-Tacoma) with the introduction of four weekly flights on 20 June. The airline now serves 14 international destinations from its biggest base of Beijing, including six in Asia and four each in North America and Europe.

Fuelled by a 7% growth in seats this August (when compared to the same month last year), Hainan Airlines is rapidly approaching the landmark volume of 750,000 weekly seats. Easy to see why the airline is China’s #5 biggest carrier, behind the ‘Chinese Big Three’ (CB3) of China Southern Airlines, China Eastern Airlines and Air China, as well as Shenzhen Airlines. However, it should be noted that the latter has actually leap-frogged Hainan over the last 12 months, adding 17% more seats this August when compared to August 2013. 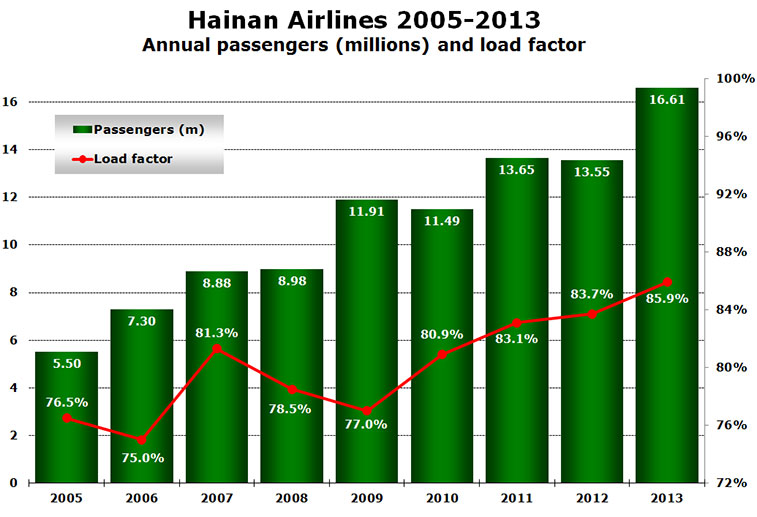 The non-alliance aligned Hainan has indeed come a long way since it formally began operations in 1993 with its first flight from Haikou to Beijing. It then took Hainan another 11 years to launch its first intercontinental route — from Beijing to Budapest in 2004. Despite more than tripling its passenger volumes since 2005, the Skytrax five-star rated (one of just seven airlines in world to make this grade) airline has also improved its average load factor by nearly 10 points over the same time frame too.

Hainan’s top 12 destinations are responsible for nearly 60% of the airline’s total weekly flights. While the number of flights offered by the top 12 destinations has increased by a net of 175 flights year-on-year, their respective share has dropped marginally (-0.4%). Over the same time period, the #1 destination Beijing has grown its number flights by 3.2%. Star performer status was reserved for Lanzhou, the capital and largest city of Gansu Province in north-west China, which has witnessed a 51.4% spike in its weekly flights, and as a result seen it rise from 17th spot to tenth. By contrast, Hainan’s original base of Haikou has received the biggest cut in flights over the last 12 months, with a drop of 4.9%. 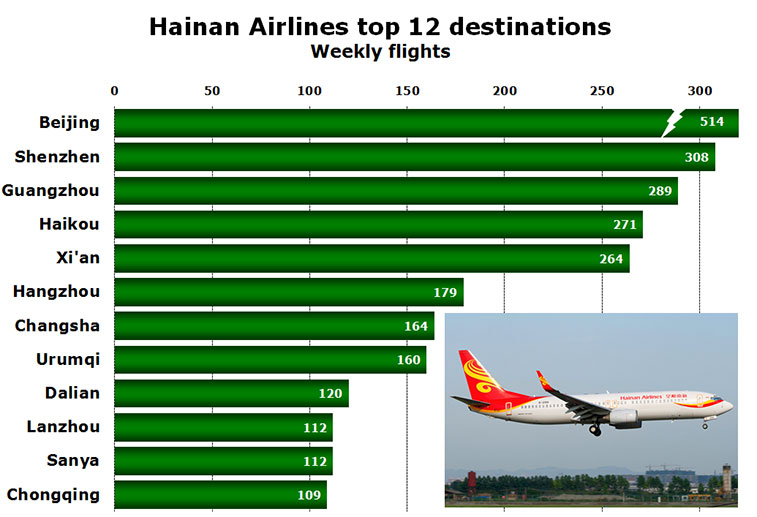 Somewhat uniquely for a Chinese airline, neither Shanghai airport feature inside Hainan’s top 12 destinations, with Shanghai Pudong coming in at #23 and Shanghai Hongqiao at #27. The carrier currently offers 50 destinations from its Beijing hub and #1 destination, with second and third placed Shenzhen and Guangzhou both offering 27 network points. The airline offers 14 international destinations from Beijing (six in Asia and four each in North America and Europe).

With an impressive annual growth of nearly 68% in the last 12 months, Hainan’s Beijing to Shenzhen route, which in August 2013 was only its eighth largest route in terms of weekly seats, has marched to the top of the August 2014 rankings. Clearly Shenzhen has become a focus city for network growth at the carrier, as the only route from the top 12 to beat this annual increase is the Hangzhou-Shenzhen city pair, which has doubled in size in the same period. Of the four Haikou routes represented in the top 12, two have fallen in the last year (Guangzhou -29%, Beijing -16%) one has remained flat (Shenzhen) and one has grown (Changsha +5.5%). 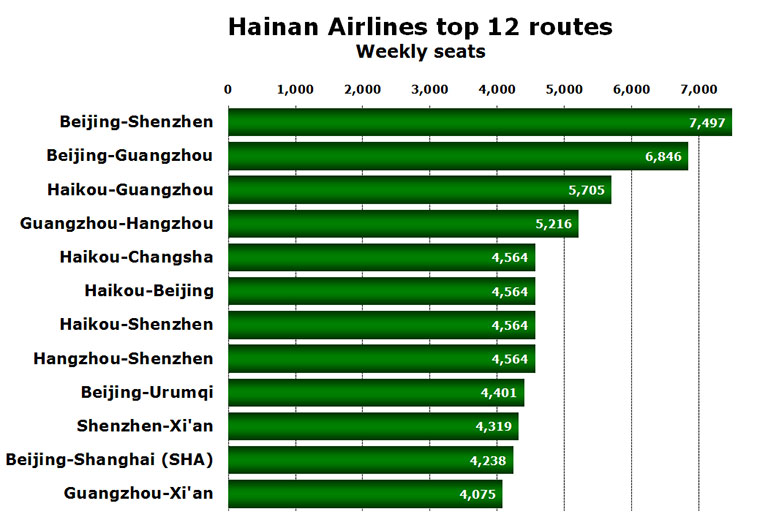 In terms of international routes, the biggest three in terms of weekly seats are the carrier’s flights from Beijing to Brussels (1,981), Seattle-Tacoma and Moscow Sheremetyevo (both with 1,498). As the airline has seemingly opted for ‘intercontinental international’ services rather than ‘regional international’ ones, it is unlikely that any international routes will ever break into the top 12 — all of which are currently domestic. At the time of writing, there are two new services planned for Hainan during the upcoming S14, W14/15 and S15 seasons, according to anna.aero’s New Route Database: