Spirit Airlines’ Airbus fleet to grow by over 20 aircraft in next 18 months; potential for many new services from US airports Ribbons and cakes greet Spirit Airlines at new airports. The US ULCC has added just two airports to its network in the last year, Kansas City at the end of last week and Phoenix Sky Harbor back in November. The 8th biggest airline in the US added 17 new routes in the last year and dropped just four.

In the first six months of 2014, Spirit Airlines has seen its passenger numbers rise by 16.2% to 6.8 million, while load factor has increased to 87.2%. Ranked 8th among US airlines in terms of monthly seat capacity it is the second-fastest growing significant US airline (after Allegiant Air). According to Innovata / Diio Mi schedule data for August 2014 and August 2013, Spirit has grown its summer network from 116 routes last summer to 133 routes this summer. This net gain of 17 routes comprises 21 new routes (or routes that are now operating in the summer as well as the winter) and four dropped routes, all of which have been from the airline’s second biggest base of Dallas/Fort Worth. The average weekly frequency of routes has fallen slightly from 8.1 flights per week to 7.9 flights per week. 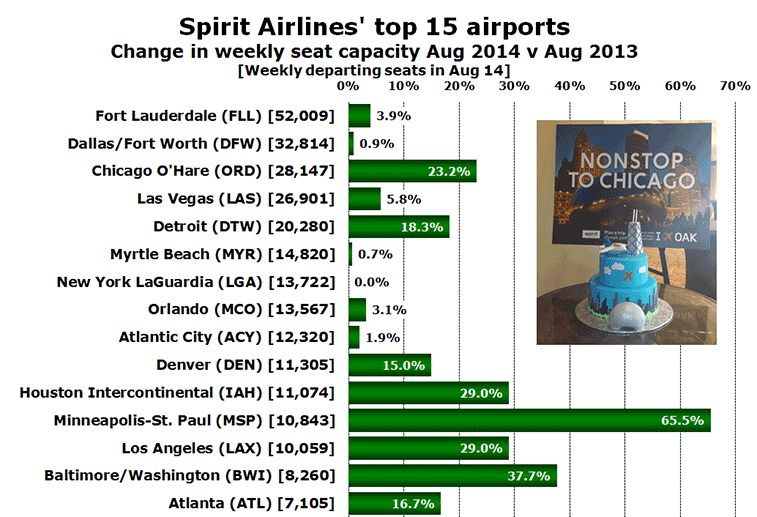 Fort Lauderdale in Florida is by far the airline’s busiest airport and is connected non-stop to 43 destinations, up just one since last summer, with the addition of flights to New Orleans on 1 August. When anna.aero examined Spirit in May 2011, operations were yet to begin at Dallas/Fort Worth. A total of 55 airports are currently served, with Kansas City being the most recent airport to receive Spirit’s services and Phoenix Sky Harbor Airport replacing Phoenix-Mesa Airport. Although 26 of the airline’s 55 airports are outside of the USA, these routes only account for around 11% of the airline’s ASKs (Available Seat Kilometres).

New routes started from 16 US airports in last year

In the last 12 months the airline has started 17 new routes which are still operating this summer. All of them are operated with daily service. These involve a total of 16 airports all of which are in the US.

Other new routes that are scheduled to start before the end of the year include; Chicago O’Hare to Atlanta and New Orleans, Detroit to Atlanta and New Orleans, Houston Intercontinental to Fort Lauderdale and San Diego. In addition, there will be new seasonal routes this winter between Boston and Palm Beach, Latrobe/Pittsburgh and Fort Myers, and Latrobe/Pittsburgh and Tampa.

The four routes dropped from Dallas/Fort Worth in the last year were Houston Intercontinental (ended 3 September 2013), Latrobe (ended 2 April 2014), Phoenix-Mesa (ended 23 October 2013) and Toluca (ended 3 September 2013). As a result of all these network changes the airline’s average sector length in the first half of 2014 has increased by 5.3% to 988 miles. 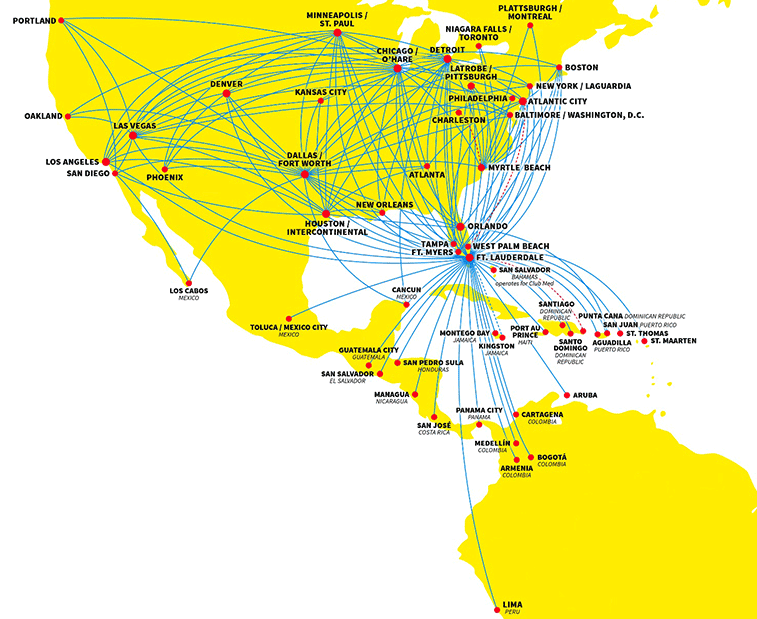 Spirit Airlines’ current summer network comprises 133 routes spread across 55 airports.  All the routes to the Caribbean and Latin America account for only around 11% of the airline’s capacity.

In the first half of 2014 Spirit has added a further three A320s, with a fourth being added during the third quarter. However, in the last quarter of 2014 seven additional A320s will join the fleet followed by eight more in the first half of 2015. With six A321s scheduled to arrive in the second half of 2015, as well as the airline’s first A320neo at the end of 2015, the fleet will have grown in size by almost 50% in just two years, with available seats growing by more than 50%. It seems likely that route development folk from airports across the US will be making regular visits to Spirit’s HQ in Miramar, Florida in the hope of benefitting from Spirit’s rapid growth.