From Chicago to the world. The last 12 months has seen Chicago O’Hare Airport celebrate new long-haul services to Beijing (with Hainan Airlines on 3 September 2013), Dubai (with Emirates from 5 August 2014) and Edinburgh (with United Airlines from 23 May 2014). While Chicago’s O’Hare and Midway airports handled around 87.4 million passengers in 2013, anna.aero estimates that Illinois’ nine other airports with scheduled services handled an additional 2.6 million passengers last year.

The airports of the US state of Illinois handled an estimated 90 million passengers in 2013 (more than all airports in Denmark, Finland and Sweden combined), with Chicago O’Hare (66.9 million, -1.0%) and Chicago Midway (20.5 million, +4.9%) accounting for the vast majority. The nine other airports in the state which welcomed scheduled airline services handled approximately 2.6 million passengers between them. Compared with 2012 passenger numbers were up less than 1% overall. Analysis of schedule data for September 2014 reveals that, compared with the same week in September 2013, the number of flights operated is up 1.6% though overall seat capacity is up 4.3%. 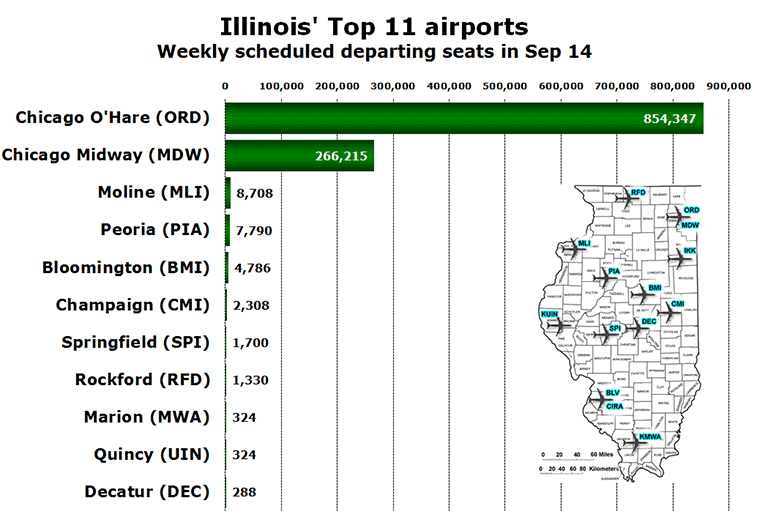 It will come as no great surprise that just three carriers account for just over 80% of all seat capacity in Illinois. American and United both have massive bases at O’Hare, while Southwest is dominant at Midway. Fourth ranked Delta Air Lines has less than 5% of the Illinois market. The leading foreign airline is Lufthansa (ranked seventh) which offers flights from Düsseldorf, Frankfurt and Munich, all to O’Hare. 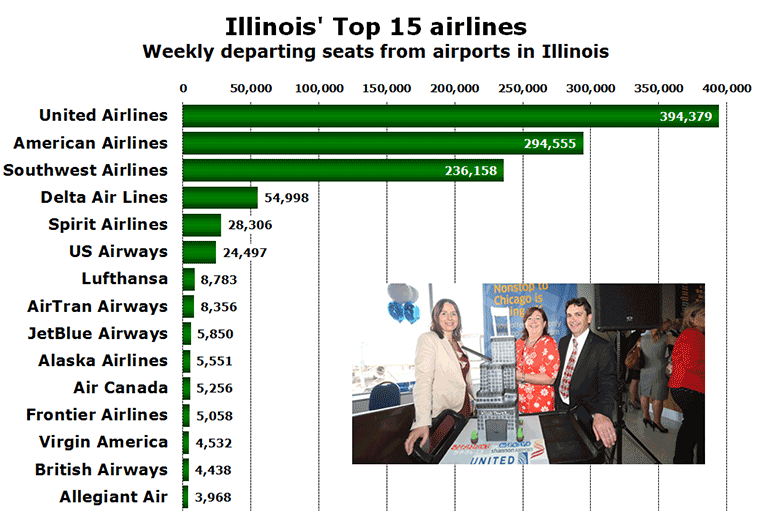 Local LCCs Allegiant Air, JetBlue Airways and Spirit Airlines have all seen their Illinois seat capacity grow by more than 20% in the last 12 months. Of these, Spirit Airlines has launched the most new services, a total of four from O’Hare to Baltimore/Washington, Kansas City, Oakland and Portland (PDX).

The leading destination from Illinois is New York’s LaGuardia Airport. American Airlines (111 weekly departures), United Airlines (92), Delta Air Lines (80) and Spirit Airlines (14) serve the route from Chicago O’Hare while Southwest Airlines offers 51 weekly departures from Chicago Midway. Atlanta is second with Delta serving its Georgian mega-hub from five airports in Illinois. A total of 221 airports are served worldwide from airports in Illinois this September, with four having been dropped in the last 12 months: 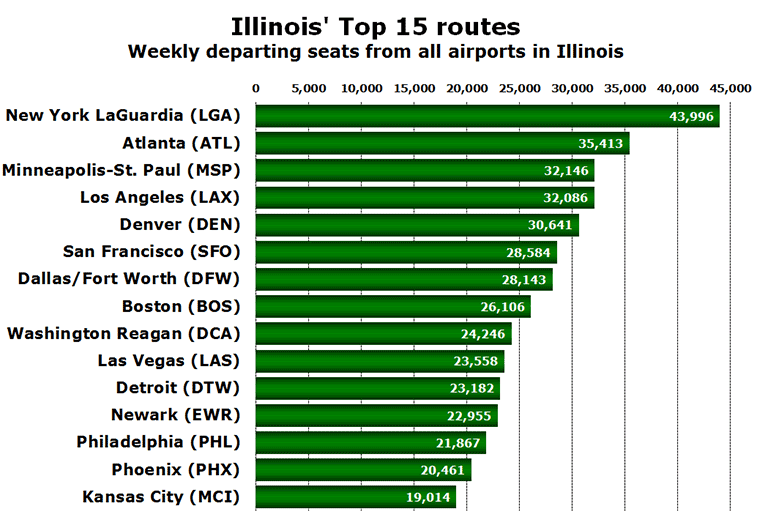 The two fastest-growing routes among the top 15 are Washington Reagan and Dallas/Fort Worth. The former has benefitted from Southwest’s recently launched six daily flights from Midway while DFW has seen an increase in capacity by American, United and Spirit Airlines, but no new routes.

If sector length is taken into account and ASKs (Available Seat Capacity) is used as a measure instead, then the top three destinations would now be London Heathrow (10 daily flights from O’Hare spread across four airlines), followed by Tokyo Narita and Los Angeles.

During the last 12 months, Chicago O’Hare has welcomed a number of new high-profile long-haul services, including to Beijing (Hainan Airlines on 3 September 2013), Dubai (Emirates launched flights on 5 August 2014) and Edinburgh (United Airlines on 23 May 2014). Further new route possibilities will no doubt be discussed by airlines and airports in great detail at the upcoming World Routes conference that will be held in Chicago from 20-23 September. anna.aero will be there as well, producing on-site our daily magazines full of show and event news.