LCCs (Jet2.com), regional airlines (airBaltic, Flybe and Europe Airpost) and long-haul airlines (Qatar Airways and US Airways) have all tapped the potential of the Scottish market in the last 12 months to launch new services. While seat capacity from Scotland’s 21 commercial airports is virtually unchanged this August compared to a year ago, the growing number of long-haul services means that ASKs (Available Seat Kilometres) are up 8%.

As voters in Scotland prepare for the big referendum vote on 18 September, anna.aero takes a look this week at how Scotland’s airports are performing at present. Annual passenger data at the country’s four busiest airports shows that after three successive years of decline (2008-2010) passenger numbers have been picking up again since 2010. Figures for 2013 show that demand across these four airports was roughly the same as it was in 2004. Interestingly, while total passenger numbers peaked in 2007, Glasgow International’s traffic peaked in 2006, Glasgow Prestwick peaked in 2007, but Edinburgh and Aberdeen both achieved their best ever years in 2013. 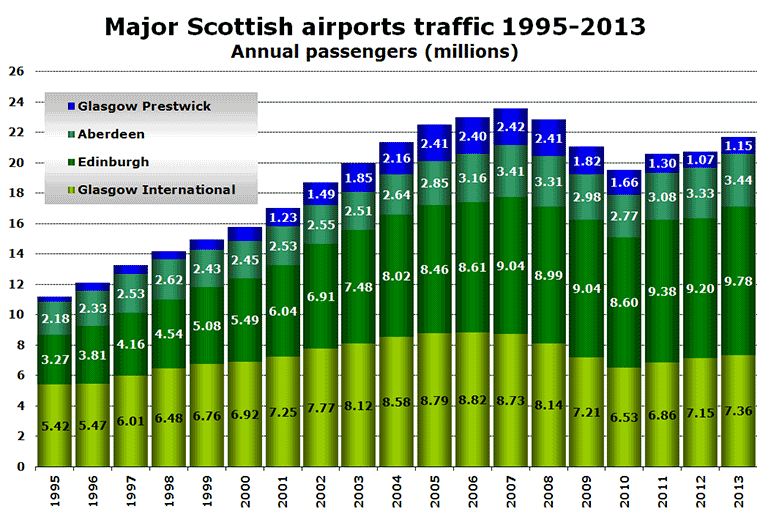 While Aberdeen and Glasgow International are still owned by Heathrow Airport Holdings (formerly known as BAA), the UK government forced BAA to sell Edinburgh Airport. In April 2012 it was announced that Global Infrastructure Partners (who also own London Gatwick and London City airports) had acquired the airport from BAA. Glasgow Prestwick Airport has also changed hands having been sold by Infratil to the Scottish government for £1 in November 2013.

21 airports with scheduled services in Scotland

While the four biggest airports account for well over 90% of annual passengers at Scotland’s airports, there are currently 17 other airports with scheduled services, with Inverness the fifth busiest airport in 2013, handling just over 600,000 passengers. According to airline schedule data for August 2014, weekly seat capacity at Scottish airports is virtually unchanged from last summer, though ASKs (Available Seat Kilometres) are up 8% thanks in part to the launch of a number of new long-haul services, such as Qatar Airways to Doha (from Edinburgh), United Airlines to Chicago O’Hare (from Edinburgh) and US Airways to Philadelphia (also from Edinburgh). 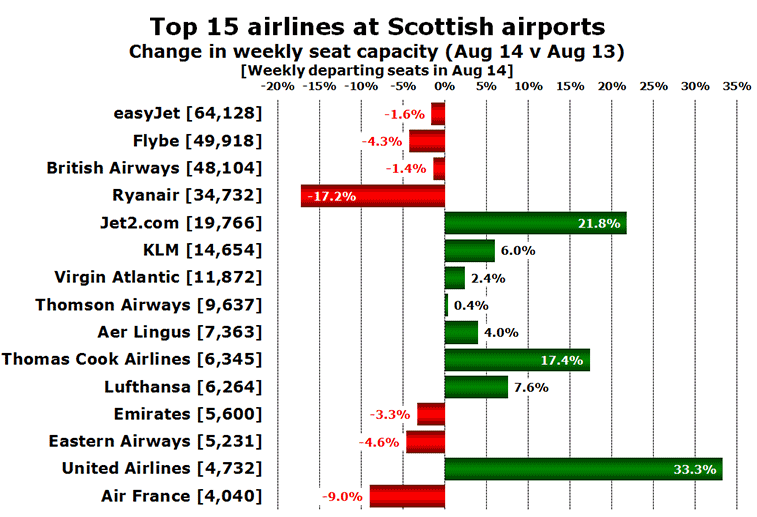 Seven of Scotland’s top 15 airlines have cut capacity this summer compared with a year ago, including the four biggest. Ryanair has made the deepest cuts dropping 13 routes and adding just two new ones, from Edinburgh to Oslo Rygge and from Glasgow Prestwick to Knock. However, Ryanair will launch operations from Glasgow International Airport at the end of October, making it the Irish ULCC’s 69th base, with the introduction of seven new services. easyJet’s capacity cut of less than 2% was helped by just one dropped route (Edinburgh to London Southend), while Jet2.com was the fastest-growing carrier among the top 10 airlines, adding five new services from Glasgow and three from Edinburgh, although nearly all of them are served with just a single weekly frequency.

A total of 37 airlines currently offer scheduled services across Scotland’s 21 airports. Airlines operating flights this August who were not present in the Scottish market 12 months ago include airBaltic, CityJet, Citywing, Europe Airpost and Qatar Airways. While long-haul routes grab the media attention, Scottish airports have also seen a number of interesting new short/medium-haul services from a range of airlines in the last 12 months.