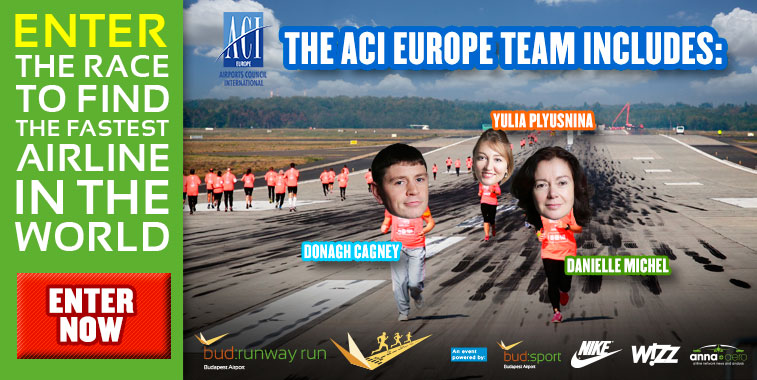 Time is running out to enter the “bud:runway run”. Registration has been extended to 25 August, for the air transport charity race, which takes place on Budapest Airport’s Runway 13R-31L on Saturday 6 September in aid of child cancer charities and other good causes. Teams and individuals from some 40 airlines and over 50 airports and other aviation enterprises have so far signed up for the event which offers two race lengths (6km = two runway lengths and 12km = four runway lengths). “bud:runway run” has been organised by an expert coalition of race host Budapest Airport, Nike, Wizz Air (official carrier and Platinum Sponsor), and marketing partner, anna.aero.

The ACI EUROPE team is among the latest to sign-up. Competing in the 12km race, the team is led by Donagh Cagney, Manager: Economics; Danielle Michel, Director: Membership Services and Events; and Yulia Plyusnina, Programme Development Coordinator. They are joined by two members of Bologna Airport’s security team — Daniele Pantaleo and Antonello Le Pera.

Besides ACI EUROPE, SWISS is the latest airline team to commit to “bud:runway run” following the recent sign-up of Southwest Airlines along with many other operators. Ready to conquer the runway at Budapest, the Star Alliance member is sending its best team to Hungary, which consists of four members: Tom Mutschmann, Aircraft Warranty Manager; Thijs De Schryver, Aircraft Systems Manager; and Marc Osswald, Specialist Control Route Profitability; and Aino Bolliger, Assistant (team leader). This comes at a time of considerable network expansion from Geneva as the Swiss flag carrier commenced five European links to Copenhagen, Lisbon, Rome Fiumicino, Heraklion and Pristina.

The fastest airline team prize is one of a series of anna.aero-Budapest Airport Golden Cake Trophies available for race winners taking part in “bud:runway run”, a totally unique race taking place on the active runway of a major European airport.

As most airlines and airports already have major charity commitments, no need for airlines or individuals entering bud:runway run to raise big cash sponsorship targets – competitors just have to pay an entrance fee (€75 for individuals or €50 per runner for team entries) with 100% of this sum donated to the benefiting charities. Besides the “Golden Cake Trophies,” Platinum Sponsor and Official Carrier Wizz Air will also be awarding tickets and Wizz Tour prizes to the key winning categories. Every participant will also be presented with a specially-produced Finisher’s Medal, a gift bag with lots of lovely presents, and a Nike technical souvenir shirt to wear with pride wherever you run in the world.

Race day at Budapest will include a significant chance for relaxed and high quality social networking among participating air transport executives at Race Headquarters, based in the former Terminal 1 — a protected building which is now the Budapest Airport Event Center, providing excellent facilities for race preparation, recovery, entertainment and other comforts. The prize-giving will take place in the former departures lounge itself.

For security reasons, all runners must complete their online registration form, including all the usual passport details, in order to take part.