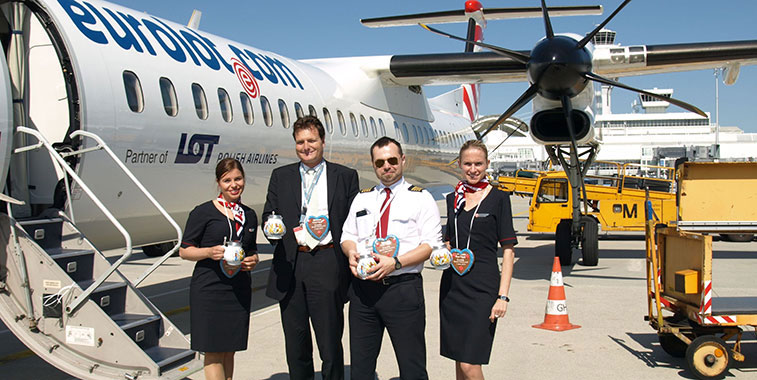 As part of its 2014 network expansion, eurolot began weekly flights from Heringsdorf to Munich and Vienna. The Q400 flight will operate a ‘triangle’ service HDF-MUC-VIE-HDF until the end of September. This brought to six the number of destinations served by the Polish regional carrier from Heringsdorf (the others being Krakow, Warsaw, Bern and Zurich).

Established on 19 December 1996, eurolot is a Polish regional operator, headquartered at Warsaw Chopin Airport. The airline, in which the State Treasury has a 62% stake, was launched as a wholly owned subsidiary of LOT Polish Airlines. Therefore, besides its own operations under the eurolot brand, the airline also offers ad-hoc charter flights to Egypt, Tunisia, Greece and Turkey, and operates short-haul services for LOT. According to Planespotters.net, eurolot’s fleet currently consists of 11 72-seat Q400s, with an average age of less than two years.

Gdansk is busiest airport by departures

Examination of Innovata schedule data for this August reveals that eurolot serves a total of 23 airports, with the top 11 gateways representing over 84% of weekly departures. While the number of departures by the top 11 busiest airports has grown by a net 80 flights year-on-year, their respective share has dropped significantly (-11%). Growing by 56%, Gdansk is by far the airline’s busiest airport in terms of weekly flights, being connected to 10 European destinations (with Krakow being the most frequently served destination from Gdansk with 11 weekly operations). Over the last 12 months, eurolot commenced three new routes from Gdansk, namely to Zurich, Helsinki and Brussels, with the latter being added on 3 March with four weekly flights. Ranking second in terms of weekly departures, Krakow posted 9.1% growth, coming as a result of the carrier adding weekly flights to Heringsdorf in northern Germany and Split in Croatia. 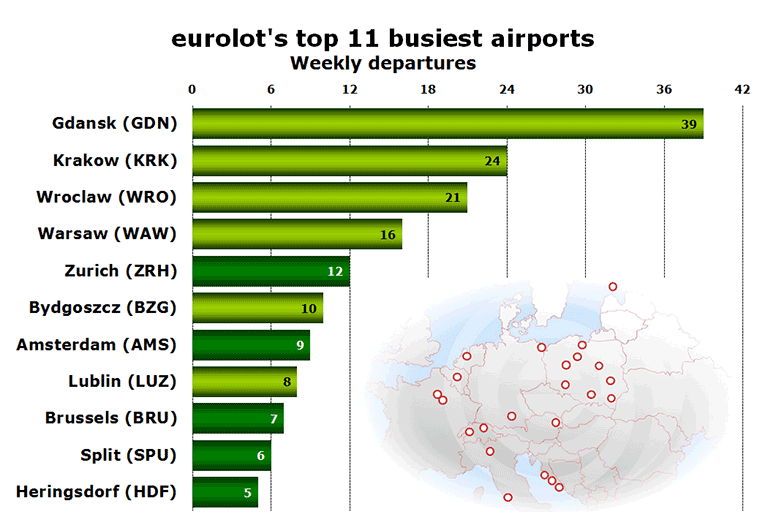 eurolot’s weekly departures more than doubled this summer, when compared to data from the same week last year, with nine of the top 11 airports posting growth, while the remainder Bydgoszcz and Brussels are new destinations this year. Therefore, the stand out performance is that emanating from operations at Wroclaw, having increased by over 400% or 17 weekly flights in the past 12 months. eurolot has significantly expanded its presence at the country’s fifth busiest airport, with the addition of new services to Brussels, Paris CDG, Lublin and Zurich. Overall, six of the top 11 busiest airports are gateways within Poland (highlighted in bright green), with Bydgoszcz being the latest Polish addition to eurolot’s network.

Polish market accounts for 67% of seats

Despite serving a total of nine countries, eurolot is focussed predominantly on the domestic sector, with 67% of its seats in August having an origin or destination there. Furthermore, following a yearly increase of 8.3% when compared to last year’s figures, Croatia is the airline’s largest European market, accounting for 7% of weekly seats and being served with a combined 13 weekly flights to Dubrovnik, Split and Zadar. However, as a result of eurolot having commenced new operations from Gdansk, Heringsdorf and Wroclaw to Zurich as well as from Heringsdorf to Bern in the past 12 months, Switzerland shares this year’s second position with Croatia. 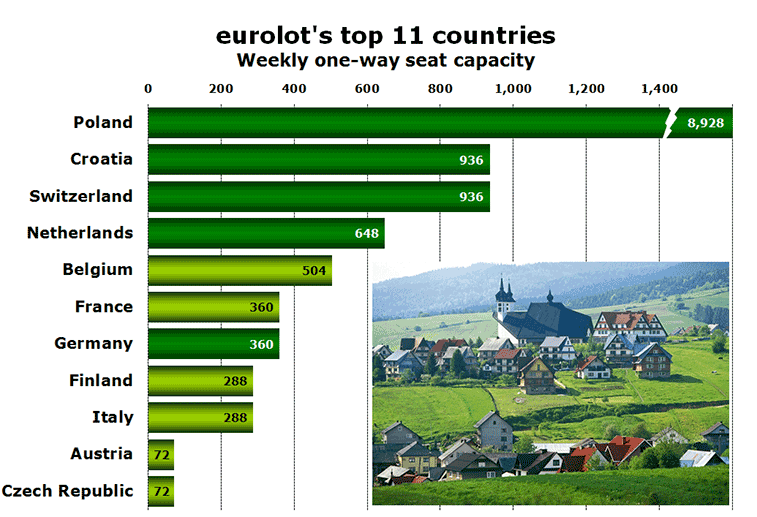 In the past 12 months, eurolot has begun operations to six new countries, namely Belgium, France, Finland, Italy, Austria and Czech Republic (all highlighted in bright green).

A total of nine routes were launched by eurolot so far in 2014, according to anna.aero’s New Route Database. A former East German airbase, Heringsdorf was one of the two airports to welcome more than two new routes from eurolot this year with the addition of operations to Bern, Zurich, Munich and Vienna. Besides this, LOT’s subsidiary commenced two new links from Gdansk to Brussels and Tatry in Slovakia. Noteworthy is the fact that Brussels is the most served new addition to the airline’s network with a combined seven weekly flights from Gdansk and Wroclaw.