Samara Airport grows by 12% in 2013; Finnair touches down from Helsinki On 7 August, Finnair touched down for the first time at Samara, with the addition of thrice-weekly flights from its Helsinki hub. The 1,717-kilometre airport pair will be operated using Flybe Finland’s E190s. The arrival of the oneworld member was celebrated with the traditional water arch salute at the 11th busiest Russian airport.

Established in 1957 as a strategic airport near the Volga River, Samara Airport (perhaps better known as Kurumoch International Airport) is the primary gateway to Samarskaya Oblast, serving a catchment area of over 3.5 million people. Samara, which is currently ranked as the country’s 11th busiest airport according to 2013 traffic figures (behind Rostov-on-Don, and above Khabarovsk), will be the gateway to one of the 11 host cities during the 2018 FIFA World Cup.

Operated by Airports of Regions — the largest airport holding company in Russia, Samara offers 37 non-stop services flown to 18 countries within Europe, the Middles East and Asia, according to Innovata schedule data for this August. Furthermore, the largest airport of the Volga region has become increasingly attractive for the network planning community as Finnair landed there for the first time on 7 August with thrice-weekly flights from Helsinki and Dobrolet is planning to start flights from Moscow Sheremetyevo this autumn. Initially, Aeroflot’s low-cost subsidiary was supposed to launch operations to Samara on 15 August, but was forced to abandon these plans due to the recent sanctions imposed by the European Union. 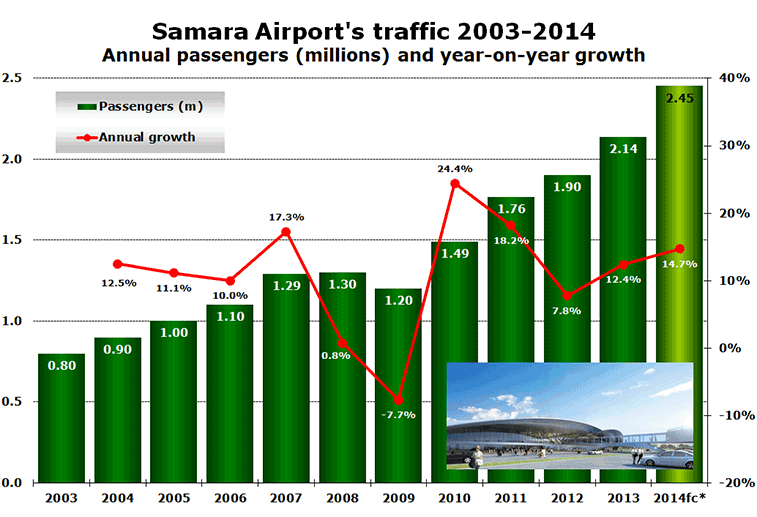 Analysis of data provided by Airports of Regions indicates that passenger traffic has visibly grown between 2003 and 2013, with an annual average growth rate (CAGR) of 10% over this period. A total of 0.8 million passengers used the airport 11 years ago, a number that increased to 2.1 million last year, which is a new record high. Nonetheless, Samara experienced growth every year, with the exception of 2009, when a decrease of 7.7% was noted due to the global economic recession strongly affecting the air transport industry. Looking back 12 months to December 2012, the airport’s traffic reported double-digit growth of over 12% in 2013.

In the first six months of 2014, for which traffic data is already available, the airport posted an increase of almost 15% when compared to the corresponding period of 2013, with 1.1 million passengers handled by the end of May. If the airport continues on this growth trajectory, it will achieve close to 2.5 million passengers in 2014, based on anna.aero forecasts.

Entering Samara’s monthly passenger data for 2013 into anna.aero’s Seasonal Variation in Demand (SVID) calculator, the airport performs well, producing a score of 6.32, giving it a “good rating”. Nevertheless, against its airport peers from Russia, its 2013 score is worse than the country’s fourth busiest airport — Moscow Vnukovo, which achieved a good rating of 5.97. In addition, Samara performs marginally lower than the 3.7 million passenger facility at Novosibirsk, having been labelled 4.26 by SVID, due to traffic being more evenly spread throughout the year. With almost 50 seasonality performance evaluations completed so far this year, the airport will be satisfied with its global ranking of 35th, nestling in between Vnukovo (5.97) and Cork (6.73).

Aeroflot dominates with 32% of seats

The top 12 carriers serving Samara account for over 94% of all weekly seats this August (1% more that in the corresponding month of 2013), while a total of 20 airlines operate from the Russian gateway. Following its own 74% growth, Aeroflot is still the biggest operator, as it commands 32% and 29% of weekly seats and flights respectively. The SkyTeam member operates just two airport pairs from Samara this summer, namely the 1,418-kilometre sector to St Petersburg (thrice-daily) and the 879-kilometre route to Sheremetyevo (five times daily). 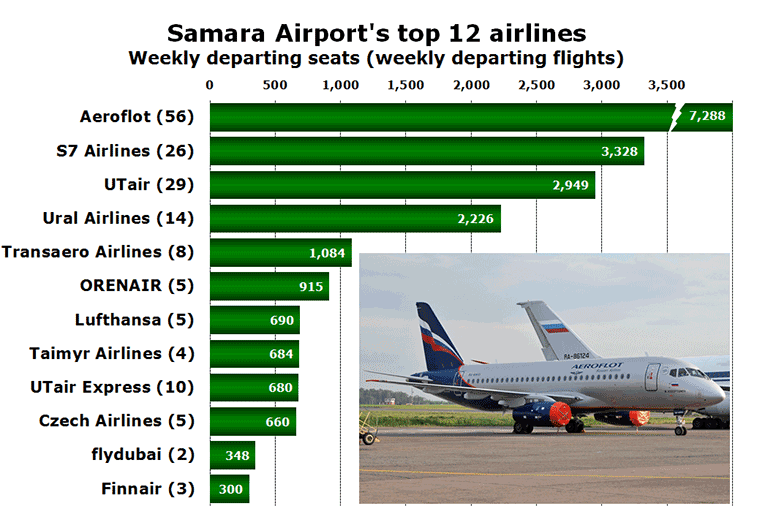 Weekly seat capacity for this summer has barely increased by 0.1%, with three of the top dozen carriers recording growth, while Taimyr Airlines saw its operations unchanged (when comparing data from this August with the same week last year). While it was 2013’s #2 airline, UTair’s 36% capacity decrease over the last 12 months has allowed the oneworld member, S7 Airlines, to steal second place this year. UTair’s capacity decline comes as a result of the carrier dropping the twice-weekly flights to Tel Aviv and transferring its Samara-Nizhny Novgorod and Samara-Ekaterinburg operations to its new regional subsidiary — UTair Express. Besides, UTair Express, a new entrant into this year’s ranking is Finnair as well, which commenced thrice-weekly flights from Helsinki on 7 August.

As of August 2014, seat capacity to Moscow’s primary airport showed growth of over 19% when compared to data from the same week last year, overtaking Moscow Domodedovo and becoming the biggest destination served from Samara with a market share of 22%. The flag carrier, Aeroflot, has expanded hugely in the last 12 months, increasing its frequency on the 879-kilometre sector to Sheremetyevo from four times daily to five times daily. Even though weekly capacity to Domodedovo declined by 2.6%, the airport is not far behind the first position, with S7, Ural Airlines and Transaero Airlines operating a combined 32 weekly flights from Samara. 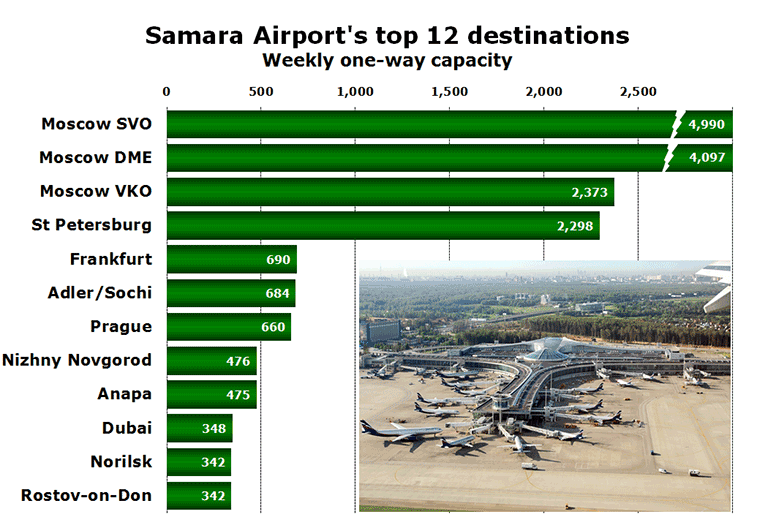 Nonetheless, the fastest growing destination from Samara is St Petersburg, which has increased by 41% when compared to last year, as a result of Aeroflot having commenced thrice-daily flights following the withdrawal of Rossiya Airlines’ twice-daily operations. By comparison, the 990-kilometre sector to Rostov-on-Don experienced the greatest capacity decline (-37%), owing to the loss of RusLine’s four weekly flights.