Strongest July for Airbus and Boeing; Emirates receives its 50th A380 On 10 July, Emirates and Airbus celebrated in Hamburg the delivery of the 50th A380 for the Dubai-based carrier. Commenting on the milestone, Sir Tim Clark, President, Emirates, said: “The A380 has been very successful for us, and this is reflected in the strong customer interest and high seat factors wherever we’ve deployed the aircraft. The A380 has helped us serve customer demand on trunk routes, operate more efficiently at slot-constrained airports, and also introduce new concepts on-board that have redefined the flying experience. By late 2017 we will have around 90 A380s in our fleet to support existing and new A380 routes.”

Following the busiest ever June, both Airbus and Boeing delivered fewer aircraft this July. Besides the fact that Boeing maintains its leading position over Airbus in terms of aircraft delivered in the seventh month of the year, the American manufacturer continues to lead the 2014 delivery race by 48 units (up from 39 in June). When compared to the first seven months of 2013, the two manufacturers managed to increase their combined deliveries by 47 units, with 752 aircraft incorporated by carriers into their fleet so far in 2014.

The combined deliveries of both manufacturers for the seventh month of the year, was 107, of which 58 came from the American producer, and 49 from its European counterpart, making it the best July since anna.aero started tracking aircraft deliveries in 2008. Notably, Boeing improved its performance when compared to the same month last year, delivering six more units, while Airbus handed over three fewer airframes. Overall, 74% of all July deliveries are narrow-body airframes. 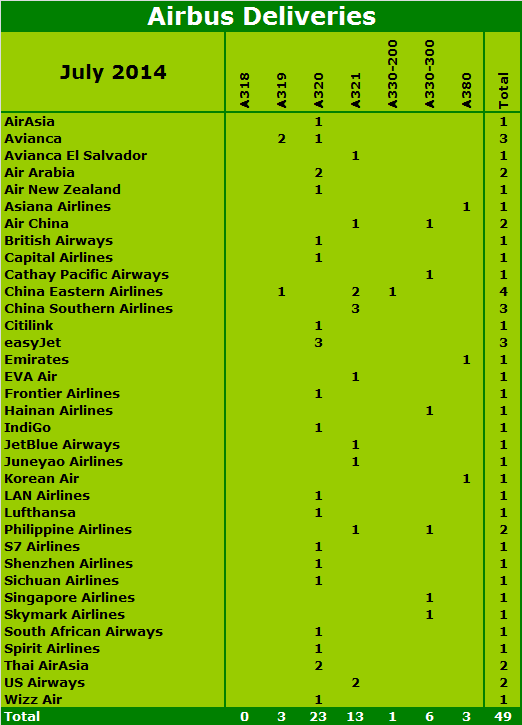 Airbus ended June with a total of 49 units delivered, which constitutes six fewer airframes than the amount delivered in June 2014 and three fewer than in the corresponding month last year. Over the seven completed months of 2014, the European manufacturer handed over 352 units, representing a modest increase of 1.4% (five units more) on the same period last year.

Once again, single-aisle deliveries in July were led by the A320 (23 units) with 39 single-aisle aircraft provided to carriers around the world. The UK low-cost carrier, easyJet, was one of four operators to receive more than two narrow-body units from Airbus, as it incorporated three A320s into its fleet. Besides this, other noteworthy carriers to receive three units were China Southern Airlines (three A321s), Avianca (two A319s and one A320) and China Eastern Airlines (two A321s and one A319), while three other carriers saw two Airbus narrow-bodies join their respective fleets in July — Air Arabia (two A320s), Thai AirAsia (two A320s) and US Airways (two A321s).

Furthermore, a total of 10 wide-bodies were delivered in July, accounting for four fewer units than in the preceding month, but the same amount delivered in the corresponding month of 2013. Following June’s delivery of three A380s, the European producer handed over another three units of the type in the seventh month of 2014, one each to Asiana Airlines, Emirates and Korean Air. Noteworthy is the fact that Airbus handed over its 50th A380 to the Dubai-based operator on 10 July. Moreover, a total of six A330-300s were delivered in June, one each to Air China, Cathay Pacific Airways, Hainan Airlines, Philippine Airlines, Singapore Airlines and Skymark Airlines. Following the delivery of the first 787-9 to Air New Zealand in June, All Nippon Airways became the second airline to incorporate this aircraft type into its fleet on 27 July. Nonetheless, ANA will become the first carrier in the world to operate the 787-9, which will be deployed on domestic routes starting on 7 August (from Tokyo Haneda to Fukuoka, Osaka Itami and Matsuyama). Air New Zealand did not plan to operate its 787-9 on a new route until October, when they will begin services from Auckland to Perth. 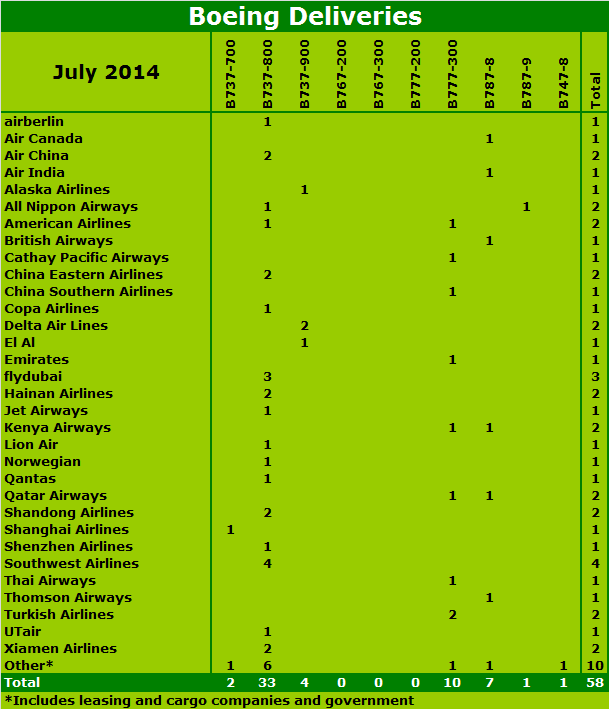 Carriers received a total of 39 narrow-bodies from the American producer, seven fewer than in the preceding month. In July, Southwest Airlines was the largest recipient of the 737 family for the fourth consecutive month, as it incorporated four 737-800s into its fleet. This was closely followed by the Dubai-based low-cost carrier, flydubai, which took delivery of three 737-800s. In addition, six other operators received more than one single-aisle unit from Boeing, namely Delta Air Lines with two 737-900s as well as Air China, China Eastern Airlines, Hainan Airlines, Shandong Airlines and Xiamen Airlines, each with two 737-800s.

A total of 19 wide-body airframes were delivered by Boeing in July 2014, six fewer than the high record handed over in June. Moreover, the American manufacturer bettered its year-on-year performance, handing over two more wide-body units than the 17 it managed in the corresponding month of 2013. Following 14 and seven 787-8s delivered to airlines in June and May respectively, Boeing continued to clear the backlog with a total of seven units of the type reaching customers in July. In addition, while Air New Zealand became the first airline to take delivery of the 787-9 in June, All Nippon Airways received the second unit of the type on 27 July.