Iceman: John Shepley, airberlin’s trouble-shooting “Chief Strategy and Planning Officer”, is one of the architects of the restructuring measures, including the closure of five crew bases and an attack on the extreme seasonality of the airline’s routes, which is worse than any legacy carrier or LCC.

airberlin’s attempts to figure out what sort of airline it needs to be in order to be profitable, took its latest step forward with last week’s announcement about a number of new measures it plans to implement in the coming months. These include fleet cuts, route changes, the closure of five crew bases and plans for closer co-operation with Etihad Airways, Alitalia and other airline partners.

From a network perspective the airline is still wrestling with the fact that having originally been a charter/leisure airline primarily serving the Palma de Mallorca market, it moved into the European LCC market around a decade ago, while also acquiring dba (a German domestic/short-haul full-service airline once known as Deutsche BA) and LTU (a long-haul leisure airline). This has given the airline’s network a rather schizophrenic feel, with customers not entirely sure where the airline is positioning itself. On the company’s Investor Relations page the “Clear Strategy” is described as:

While this may be a “clear” strategy, it has not delivered satisfactory financial results for many years, suggesting it may not be a good strategy. The costs associated with a complex route network and “excellent service” have clearly been too high for the low yields associated with “attractive fares” and a strong “touristic performance.”

Seasonality is a major issue for airberlin and NIKI

The airline acknowledged in its latest statement that: “The new network design will lead to a more stable operation throughout the year, reducing the effects of traditional high seasonality.” This is something of an understatement. We compared planned seat capacity for a week in February 2015, with a week in August 2014, for a basket of European legacy airlines and LCCs. This showed that airberlin, and its Austrian subsidiary — NIKI, are not only more seasonal than any of the legacy airlines, but also more seasonal than any of the major LCCs, with the exception of Vueling. 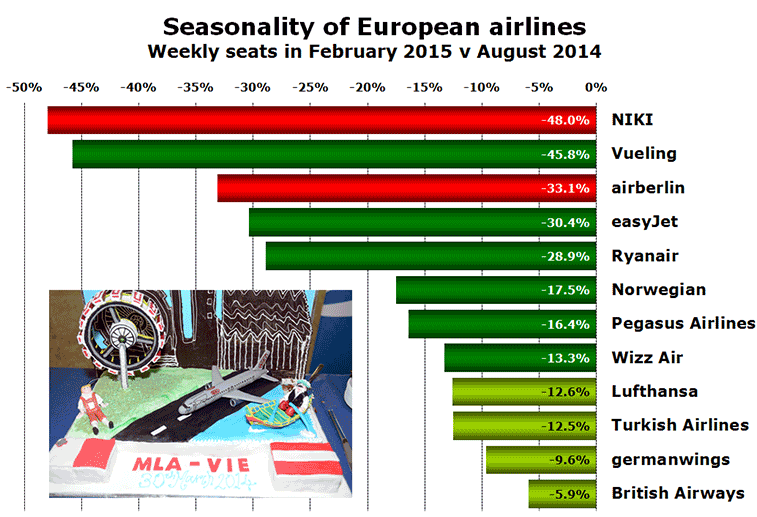 This is not something the airline will be able to fix in one or even two years. The main reason for this extreme seasonality is the airline’s focus on holiday routes during the peak summer season.

A further anna.aero analysis of the airline’s summer (and winter) route network focussing on the frequency with which routes are operated, results in some revealing statistics. For the purposes of this analysis airberlin and NIKI are treated as a single airline. This summer the airline operated a total of 122 routes, with just a single weekly frequency and a further 72 routes with just two weekly flights. However, last summer airberlin operated as many as 148 routes with just a single weekly frequency, so there are already some signs that things are changing. 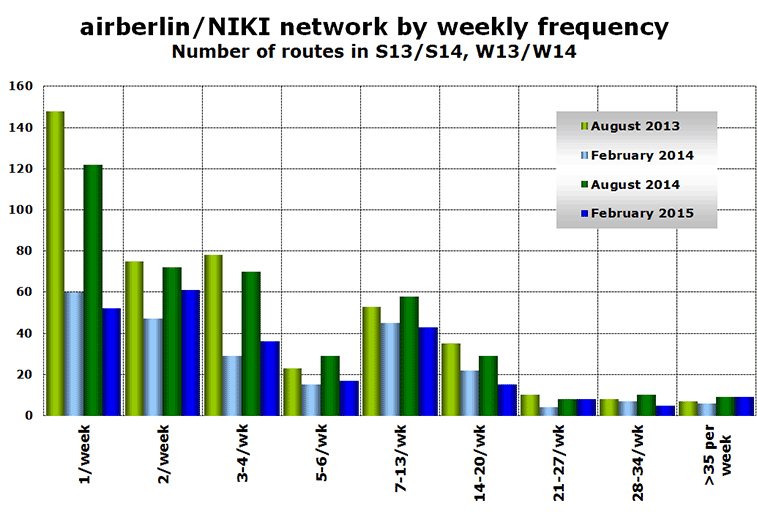 Further analysis reveals that among European airlines, only one (Thomson Airways with 229 routes) operates more routes on a weekly basis. Even Thomas Cook Airlines only has 110 weekly routes and Condor 83. This further highlights the airline’s enthusiasm for ‘leisure’ routes, which it seems reluctant or unable to change.

Hannover is biggest crew base to be closed

The airline made reference to the closure of five crew bases. These are in Dortmund, Dresden, Erfurt, Hannover and Münster/Osnabrück. Of these, Hannover was by far the biggest base this summer operating 58 weekly departures, followed by Dresden (41) and Münster/Osnabrück (19). Dortmund only had 12 weekly flights (all to Palma de Mallorca) while Erfurt’s last remaining scheduled service, to Antalya, was suspended in November 2013.

This summer airberlin operates scheduled services to 120 airports, 11 fewer than last summer. A total of 12 airports have been dropped from the airline’s network, with just one new addition, Larnaca in Cyprus. Despite this, weekly seat capacity has risen by just over 1%. Following our in-depth analysis of airberlin’s summer schedule back in January, the airline also suspended its last remaining route to the UK, when Etihad Regional took over operating between Düsseldorf  and London Stansted on 2 June. 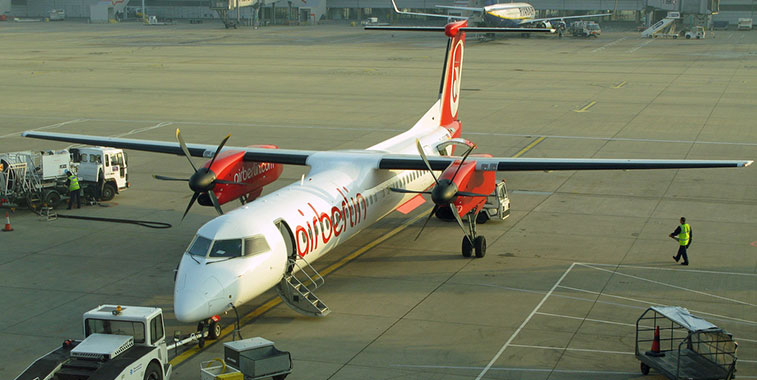 airberlin’s last UK service between Düsseldorf and London Stansted, operated by the airline’s Q400s, was suspended at the beginning of June. The route was handed over (at least for now) to Etihad Regional’s Saab 2000s, which now offer the only international route from Stansted operated by a turboprop aircraft.

More network details to be announced next month

airberlin has indicated that as part of the process of reducing seasonality, the fleet may shrink by up to 10 aircraft and that capacity may also be cut by around 10%. This alone will not improve seasonality unless the mix of routes and the way in which they are operated during the summer and winter also changes. The airline has promised a more detailed explanation by the end of September. Whether this will include the spinning-off into a separate entity of the pure leisure side of the business remains to be seen. What was noticeable in the airline’s statements, was how much emphasis was given to the role of part-owner Etihad Airways (and its latest investment vehicle Alitalia) and how little mention was made of its membership of the oneworld alliance.