On 2 November, Malaysia Airlines made Darwin its sixth Australian destination, serving the airport with four weekly flights from its Kuala Lumpur hub. Following the arrival of the Malaysian flag carrier, Darwin Airport recorded 14% growth in international passengers in FY2014.

Established in 1919 as Parap Airfield, Darwin Airport serves Darwin — the capital of the Northern Territory of Australia — having a population of around 146,000. The airport, which is currently classified as the busiest airport serving the federal territory, above Alice Springs, is owned by Northern Territory Airports (NTA). Examination of Innovata schedule data for this August indicates that the airport’s summer programme includes over 20 services operated to six countries within Asia and Australasia, with its latest route having been launched on 18 August to Cairns operated via Gove by Airnorth. 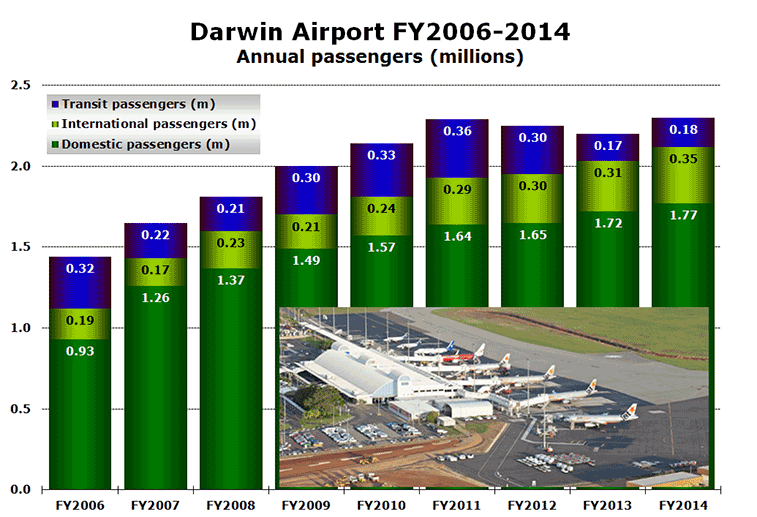 Analysis of data facilitated by NTA indicates that while the traffic trend was fairly uneven between FY2006 and FY2013 peaking in FY2011 at 2.29 million passengers, Darwin has consolidated its annual passenger performance in FY2014, reaching 2.30 million this year (a new record high). Commenting on the recent growth, Parashos, Director of Commercial and Aviation Development, NTA, said: “This growth is encouraging, and confirms that our route development strategy — focusing on key markets and building the northern hub — is a solid one that delivers benefits for the region.” The major structural change in the airport’s traffic mix is the decreasing proportion of transit passengers as a share of the total figure in recent years. In FY2006, transit traffic accounted for 22% of overall passengers, while in FY2014, this sector represented 7.8% of annual throughput.

Looking back 12 months to June 2013, Darwin’s traffic has increased by 4.5%, with the international traffic achieving double-digit growth of 14% in FY2014 and outperforming the domestic sector. Contributing to the rapid international expansion at Darwin, Malaysia Airlines launched non-stop flights from Kuala Lumpur on 1 November, making the airport its sixth Australian destination. “At the beginning of FY2014 we added the global hub destination Kuala Lumpur to our network with Malaysia Airlines, further connecting the Top End to Southeast Asia and the world,” added Parashos.

Domestically, the airport posted a modest increase of 2.8%, with close to 1.8 million passengers arriving and departing from the airport in FY2014. On 15 April, Tigerair Australia launched daily operations on the 2,850-kilometre sector from Darwin to Brisbane, using its A320s. Besides this, Virgin Australia Airlines adjusted its Brisbane flight schedule in April, to cater to business passengers on the busy route. Earlier in the year, Qantas also increased departures to Darwin across its network, while Jetstar Airways increased frequencies from Cairns and Adelaide.

Qantas controls 35% and 28% of seats and flights

Evaluation of Innovata schedule data for this summer reveals that a total of 11 carriers are operating from Darwin, with Qantas maintaining its top position, even though it reduced its weekly seat capacity by 1.8%. Therefore, the oneworld member commands 35% and 28% of seats and flights respectively and operates a total seven domestic airport pairs from Darwin this summer, with both Sydney and Alice Springs being the most frequently flown destinations, each with twice-daily flights. Ranking second with a weekly seat share of 24%, Jetstar operates on six routes, namely to Adelaide, Brisbane, Cairns, Denpasar, Melbourne and Sydney, all being served with daily flights. 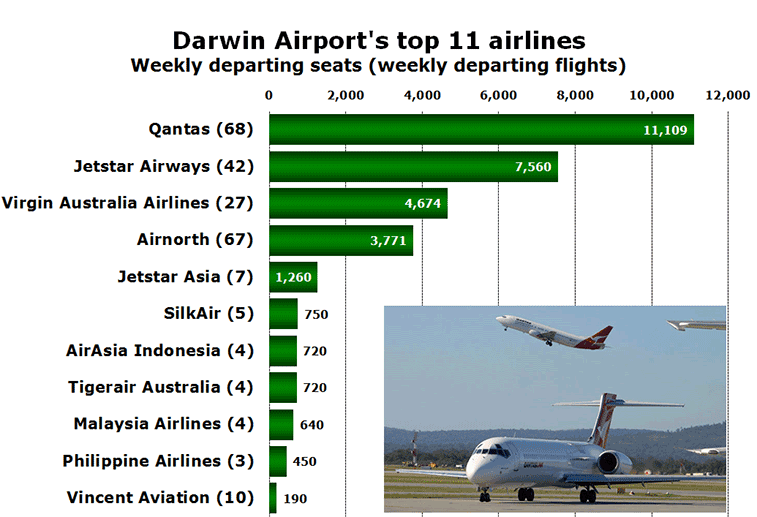 Weekly seat capacity for this summer increased by 2%, with just Airnorth and SilkAir recording growth, while AirAsia Indonesia saw its operations unchanged (when comparing data from this August with the same week last year). Singapore Airlines’ wholly owned subsidiary — SilkAir, is the fastest growing carrier at Darwin, as a result of increasing its frequency to Singapore. By comparison, Philippine Airlines has trimmed a total of 600 weekly seats (-57%) from its Darwin offering, as a result of decreasing its Manila services from daily to thrice-weekly. Besides Malaysia Airlines and Tigerair Australia, a new entrant into this year’s ranking is Jetstar Asia, which replaced Jetstar on the 3,340-kilometre airport to Singapore.

Weekly seat capacity to Brisbane experienced double-digit growth of 23% this August, when compared to data from the same week last year, overtaking Sydney and becoming the top destination served from Darwin, featuring a market share of 18%. Qantas has increased its frequency on the 2,850-kilometre sector to Brisbane by four weekly departures, while Tigerair Australia commenced four weekly services on the route this April. On the other hand, weekly capacity to Sydney was trimmed by 399 seats (-7.6%), with Jetstar, Qantas and Virgin Australia serving the airport pair this August. 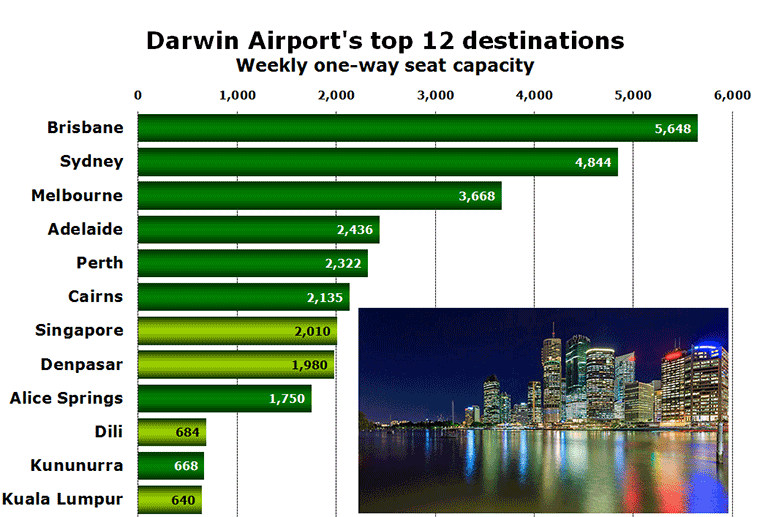