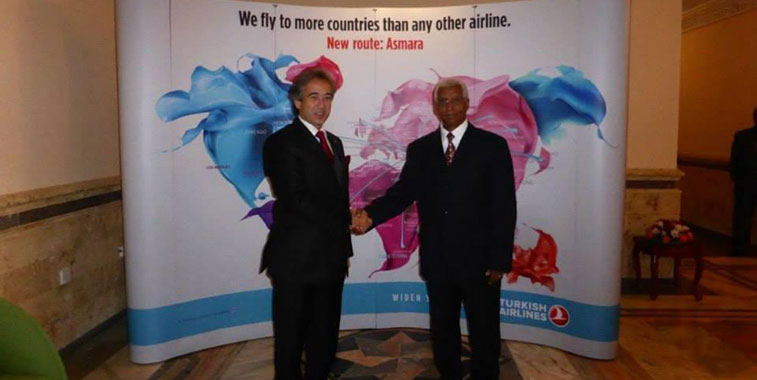 The Turkish Ambassador in Eritrea Mr Firat Sunel and Mr Paulos Kahsay, Director General of Eritrean aviation celebrated the launch last week of Turkish Airlines’ new thrice-weekly service to Istanbul (via Taif in Saudi Arabia). Our analysis suggests that Asmara is now the 39th destination in Africa that the Turkish flag-carrier operates to.

With the arrival last week of Turkish Airlines services from Istanbul, Asmara International Airport, serving the capital of Eritrea, has arrived on the global aviation scene. It was also confirmed recently that Qatar Airways would be adding Asmara to its route network with twice-weekly direct services from Doha starting in December. Located across the Red Sea from Saud Arabia and with Sudan, Ethiopia and Djibouti as neighbours, Eritrea has been under the influence of Italy and the UK during the last 100 years. It officially became an independent state in 1993.

In recent years Eritrea has had mixed success at establishing a national flag-carrier. For a while Eritrean Airlines and Nasair (not to be confused with Saudi Arabia’s flynas which used to be known as nasair) operated in competition. In 2011 the two airlines were merged. According to local reports Eritrean Airlines in May of this year began operations to Jeddah and Dubai with twice-weekly flights using an A320. However, the airline does not appear to have an on-line booking tool so this can not be confirmed.

Last December Sudanese carrier Nova Airways began flights to Asmara from Khartoum using CRJ 200s, while EGYPTAIR offers daily flights from Cairo using an A320. The almost three hour service departs Cairo at 00:20 and arrives at 03:15 in Asmara. The return flight leaves Eritrea at 04:15 and arrives back in Cairo at 07:10. Yemenia appears to offer four times weekly flights from nearby Sana’a using an A330 and with a flying time of just one hour and 10 minutes. According to its website Sudan Airways also offers twice-weekly flights (Wednesdays and Sundays) from Khartoum using a Fokker 50 with a journey time of around 85 minutes.

During the 1930s while under Italian rule, Asmara saw the building of a number of delightful buildings in the then fashionable art deco style. Many of these have survived relatively intact for 80 years and will appeal to lovers of the style that also saw the creation of the likes of the Chrysler Building in New York. 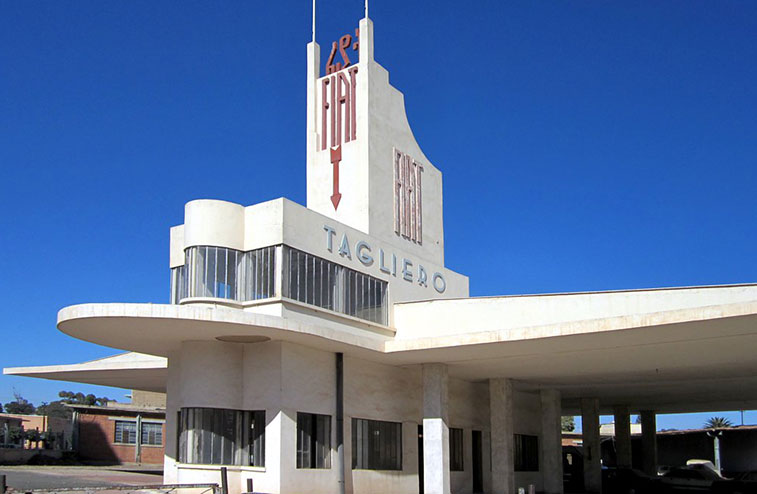 Is it a bird, is it a plane, is it an airport? No, it’s a gas station in Asmara designed in the art deco style in the 1930s when Eritrea was under Italian rule. Asmara is still home to a number of well-preserved art deco buildings. Turkish Airlines’ new thrice-weekly service will make it easier for the world’s architecture enthusiasts to come and see these rarely-visited architectural gems.