bmi regional expands in Scandinavia; Aberdeen and Bristol are biggest bases but 20% of passengers now on non-scheduled services On 3 March 2014, bmi regional began twice-daily flights between Newcastle and Brussels. This has helped make Brussels the airline’s biggest airport in mainland Europe with 24 weekly departures. Apart from the 11 to Newcastle, the carrier also flies 13 times weekly to the EU capital from East Midlands.

Prior to the emergence of LCCs, the second biggest airline in the UK after British Airways was for many years British Midland, the airline run by Sir Michael Bishop. However, in 2009 the airline was sold to Lufthansa who acquired not just the mainline carrier but also subsidiaries bmibaby and bmi regional. When Lufthansa sold all three airlines to IAG (owners of British Airways) in 2012, British Airways in effect closed down bmi (as the mainline part was then known) and bmibaby, but sold bmi regional to a group of private investors operating as Sector Aviation Holdings.

From the start of the winter 2012 season, bmi regional began operations as a fully independent, unaligned carrier operating a fleet of Embraer ERJ 135s and ERJ 145s. In 2013 the carrier transported almost 450,000 passengers at a load factor of just over 49%. Some 390,000 passengers were carried on the airline’s scheduled network which has seen a reasonably high turnover as the carrier identifies the most profitable market niches for its fleet. This week saw the start of the airline’s two latest routes from Kalmar in Sweden to Gothenburg and Berlin. 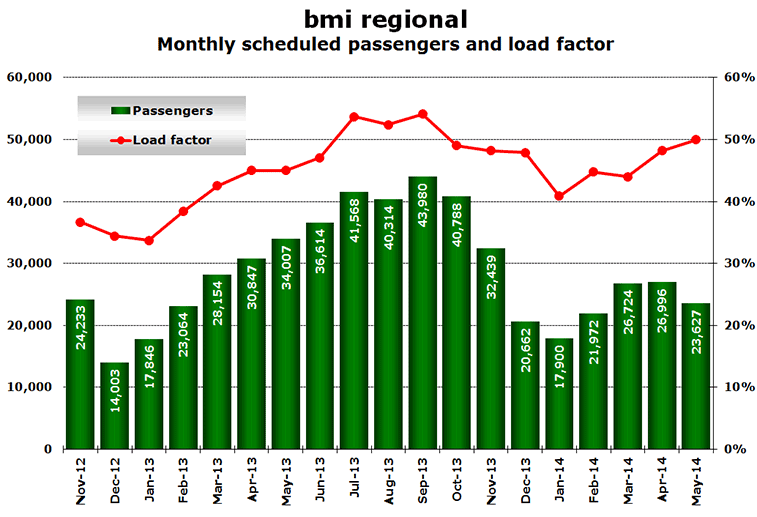 Analysis of UK CAA data reveals that while just 13% of the airline’s passengers flew on non-scheduled services in 2013, in the first five months of 2014 this figure has risen to just over 20%. These non-scheduled services include business shuttle services for major international companies, particularly energy and oil-related industries. Then there is the airline’s ad-hoc charter business which has been growing rapidly. Customers include Premiership football teams, Heineken Cup rugby teams and rock groups. Finally, the airline also offers its aircraft to other airlines on a wet-lease basis.

Since February scheduled passengers have been down year-on-year with May 2014 showing a 30% reduction compared with May 2013. Analysis of schedule data suggests that this level of reduction will continue across the summer months.

Aberdeen and Bristol are biggest bases

With the start of the airline’s two new routes from Kalmar this week, bmi regional now operates scheduled services from 22 airports across Europe. From Aberdeen, where the airline has its corporate headquarters, bmi regional flies non-stop to six destinations; Bristol, Manchester and Norwich in the UK, Esbjerg in Denmark, as well as Kristiansund and Oslo in Norway. From Bristol, the airline’s five routes are Aberdeen in the UK; Frankfurt, Hamburg and Munich in Germany; and Milan Malpensa in Italy. 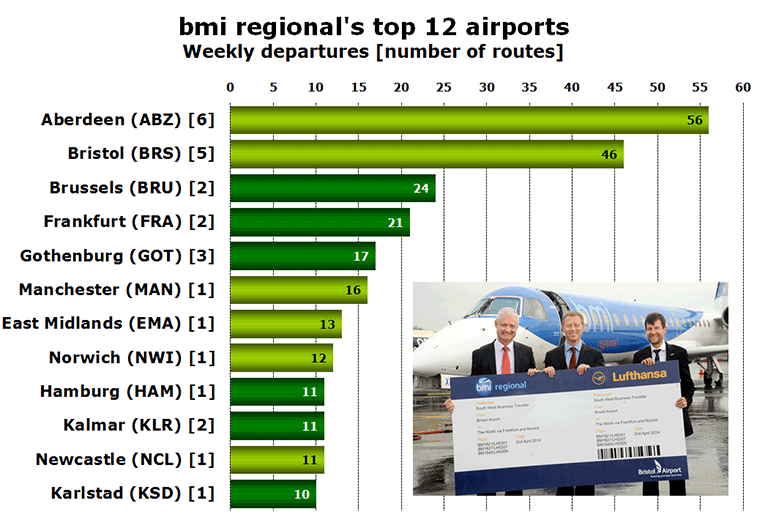 UK airports (in bright green) account for six of the airline’s top 12 airports with Star Alliance hubs Brussels and Frankfurt the leading airports in mainland Europe. Apart from this week’s two new Kalmar routes, other routes launched in the last 12 months include Aberdeen-Oslo (28 October), Gothenburg-Stavanger (23 January), Newcastle-Brussels (3 March) and Frankfurt-Karlstad (26 May).

During the last 12 months, bmi regional has suspended a number of services that have clearly failed to deliver the financial returns the company expected. These include:

As a result eight airports that were served last September are not served at present: Antwerp, Billund, Copenhagen, Edinburgh, Glasgow, Hannover, Lyon and Zurich.