On 1 September, Etihad Regional touched down for the first time at Dresden, with the addition of daily flights to Amsterdam and Zurich. Apart from Etihad Regional, Dresden has seen the arrival of three other carriers in the past 12 months, namely InterSky, UTair and Nouvelair Tunisie.

Opened in July 1935 as a local airfield, Dresden Airport (formerly known as Flughafen Dresden-Klotzsche) is the main gateway to the capital city of the Free State of Saxony. While the city has a population of around 525,000, Dresden’s catchment area extends to three countries, including Saxony and Southern Brandenburg in Germany, Northern Bohemia in the Czech Republic, as well as Lower Silesia in Poland. The airport, which is currently ranked as the country’s 16th busiest gateway according to last year’s traffic figures (behind Dortmund, but above Karlsruhe/Baden-Baden), offers 23 non-stop services operated to 10 countries within Europe and North Africa (according to Innovata schedule data for this September). 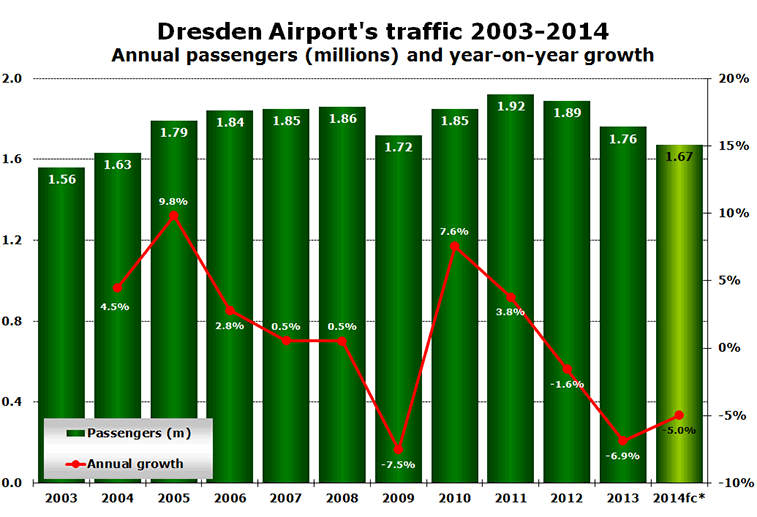 Analysis of data facilitated by the airport authority reveals that passenger traffic at Dresden has oscillated between 1.5 million and 1.9 million since 2003, increasing by a modest average annual growth rate (CAGR) of 1.1%, over the 2003-2013 timeframe. Over 1.5 million passengers used the airport 11 years ago, a number that increased to close to 1.8 million last year, which is still below the peak achieved back in 2011. The collapse of Cirrus Airlines in January 2012 had a major impact on traffic flows to and from the airport, resulting in a decrease of 1.6% that year. A victim of high fuel prices and a weakened economy, the German regional airline suspended three airport pairs from Dresden, namely to Hamburg (16 times weekly), Zurich (16 times weekly) and Vienna (thrice-weekly). Looking back 12 months to December 2012, Dresden’s traffic decreased by 6.9%, while the aircraft movements went down 11%. In the first seven months of 2014, for which traffic data is already available, the airport posted a decrease of 5% when compared to the corresponding period of 2013, with 933,234 passengers achieved until end-July. If Dresden continues on its existing 2014 decline trajectory, anna.aero forecasts it will handle close to 1.7 million passengers this year. Part of the airport’s problem is the fact that Berlin Schönefeld (which in 2016 will evolve into Berlin’s only gateway under the name of Berlin Brandenburg) is just 140 kilometres to the north. Nevertheless, Dresden’s airport is just 15 minutes or a few stops away from the main stations in the city centre.

Monthly traffic figures indicate that demand follows a typical seasonal profile, with September being twice as busy as January, the month where the airport records the lowest traffic figure. Entering Dresden’s monthly passenger data for 2013 into anna.aero’s Seasonal Variation in Demand (SVID) calculator, the airport performs well, generating a score of 5.38, a “good rating”. Against its fellow peers from the catchment area, its 2013 score is significantly better than Leipzig (12.01 — poor). On the other hand, when compared to Berlin Schönefeld — Germany’s eighth busiest airport — it performs worse than the 6.7 million passengers facility, which scores 1.96 (an “excellent” result).

With over 50 seasonality performance evaluations completed so far in 2014, the airport had entered the global ranking at position #32, between Orlando Sanford (5.01) and Cluj (5.51). However, if it had matched its 2012 performance of 4.73, this would have seen it achieve the 28th spot.

Lufthansa dominates with 35% and 34% of seats and flights

Evaluation of Innovata schedule data for this September indicates that a total of 13 airlines are serving Dresden, with Lufthansa maintaining its top position, even though it reduced its weekly capacity by 17% or 1,882 seats. This comes as a result of the Star Alliance member having taken the decision to only operate intra-European routes from its Munich and Frankfurt hubs, while all other services (including the 16 weekly flights between Dresden and Düsseldorf) have been transferred to its low-cost subsidiary — germanwings. Nonetheless, the German flag carrier accounts for 35% and 34% of weekly seats and flights respectively and operates six daily flights to Frankfurt and 33 weekly departures to Munich from Dresden this September. Ranking second with a weekly seat share of 25%, Lufthansa’s subsidiary serves a total of five destinations from Dresden, namely Cologne Bonn, Düsseldorf, Corfu, Stuttgart and Hamburg, with the latter having been added on 1 September and being served with 11 weekly flights. 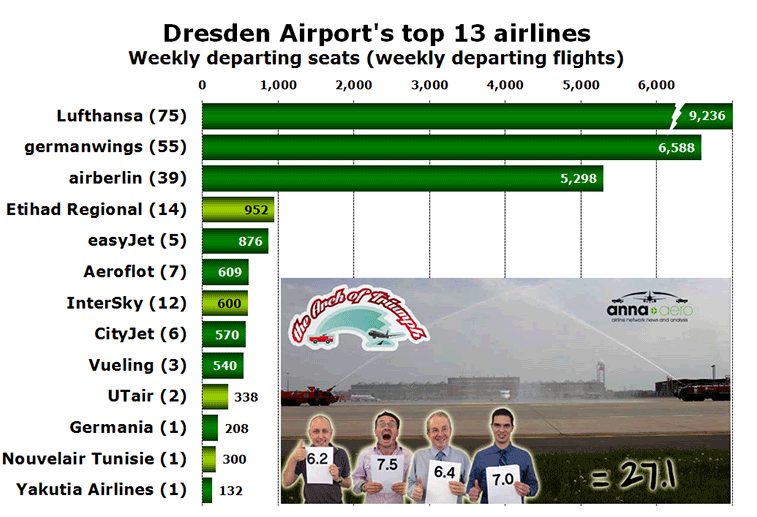 Weekly seat capacity this summer has gone up 6.2%, with germanwings (+66%), Aeroflot (+62%) and easyJet (+30%) noting growth, while both CityJet and Vueling saw their operations unchanged (when comparing data from this September with the same week last year). However, in the last 12 months, Dresden has seen the arrival of four new carriers (highlighted in bright green), including InterSky with six weekly flights from Zurich on 5 May, UTair with twice-weekly operations from Moscow Vnukovo on 27 October as well as Nouvelair Tunisie with weekly seasonal services from Djerba. Moreover, Etihad Regional (formerly known as Darwin Airline) touched down for the first time at Dresden on 1 September with daily operations to Amsterdam and Zurich. Also noteworthy is the fact that Etihad Regional is planning to expand its presence at Dresden with a new route to Vienna on 3 November (served twice-daily), while the 557-kilometre sector to Zurich will see a frequency increase to twice-daily starting from 26 October. Furthermore, the airline will also connect Dresden to both Copenhagen and Brussels from March 2015. On 1 September, germanwings — ranking second with a weekly seat share of 25% at Dresden — commenced 11 weekly services to Hamburg. Lufthansa’s subsidiary is now serving a total of five destinations from the capital city of the Free State of Saxony.