As part of its network expansion, Ethiopian Airlines commenced operations to its eighth European destination on 2 June, with four weekly flights from Addis Ababa to Vienna. Nevertheless, the Star Alliance member increased its presence in Europe with another destination on 2 September, when it commenced thrice-weekly flights from its main base to Madrid, operated via Rome Fiumicino.

Founded on 21 December 1945, Ethiopian Airlines (formerly known as Ethiopian Air Lines until 1965) is the flag carrier of Ethiopia, headquartered in Addis Ababa. The wholly government-owned carrier has established itself as the third largest airline in Africa, with a weekly seat share of 6.2% (according to Innovata schedule data for week commencing 2 September 2014), behind South African Airways and EGYPTAIR. The airline itself promotes the fact that it operates a fleet of 68 units (including Boeing and Bombardier aircraft types). However, its strategic plan is to incorporate an additional 30 airframes into its fleet in the following years, out of which 14 are A350-900s. A Star Alliance member since December 2011, Ethiopian Airlines has been growing without interruption in recent years, as analysis of Innovata seat capacity reveals that around 200,000 weekly seats will be offered this September, and 45% more since anna.aero last looked at this carrier three years ago.

Examination of Ethiopian Airlines’ traffic data indicates that the airline handled 5.2 million passengers in FY2013 (a new record high), representing an increase of 13% when compared to FY2012 figures. Even though its load factor went down 0.6%, the financial year ending June 2013 was not a bad year for the carrier, as it managed to grow its total revenue by 9.2% to $2.15 billion, as well as its ASKs by 15%. 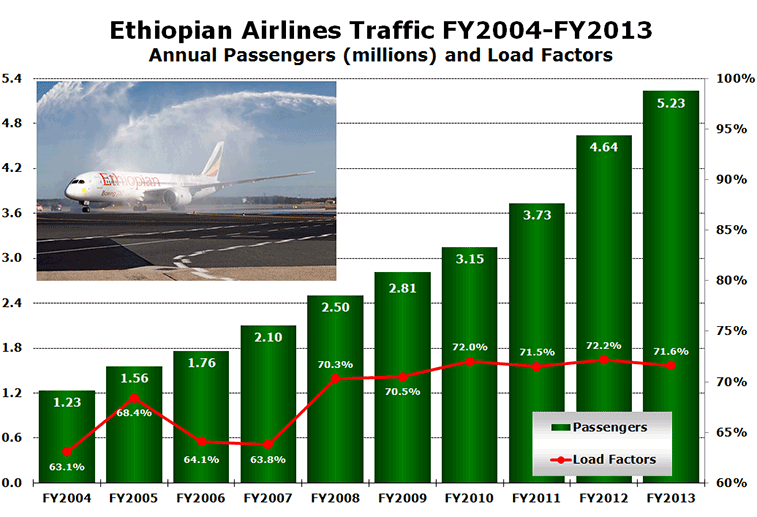 Looking at passenger development between FY2004 and FY2013, Ethiopian Airlines’ traffic has visibly accelerated, with an impressive average annual growth rate (CAGR) of 16% over this period. Furthermore, the carrier’s load factors have fluctuated between 63% and 72% over this timeframe.

Addis Ababa-Dubai is #1 route by seats

Overall, the carrier operates 91 non-stop services to a total of 52 countries, while from its main base at Addis Ababa it serves a network of 66 airport pairs, of which Dubai is the largest destination served in terms of weekly seat capacity this September. The 2,514-kilometre sector to the most populous city in the UAE is operated thrice-daily, utilising a mixed fleet of the Star Alliance member’s 767-300s, 787-8s, 737-800s, 777-200s and 757-200s. In fact, Ethiopian Airlines is the dominant operator at Addis Ababa, featuring a weekly seat share of 89%. In terms of its most significant links, the top 12 routes account for 16% of all weekly seats, with the 504–kilometre sector to Makale (highlighted in bright green) being the only domestic route that has made into this year’s ranking. On 1 September, Ethiopian Airlines expanded its presence at Addis Ababa with a new domestic link to Bale Robe in the south-central part of the country, which is served four times weekly. Furthermore, the carrier will also commence daily flights from its main base to Kombolcha in north-central Ethiopia starting 10 September. 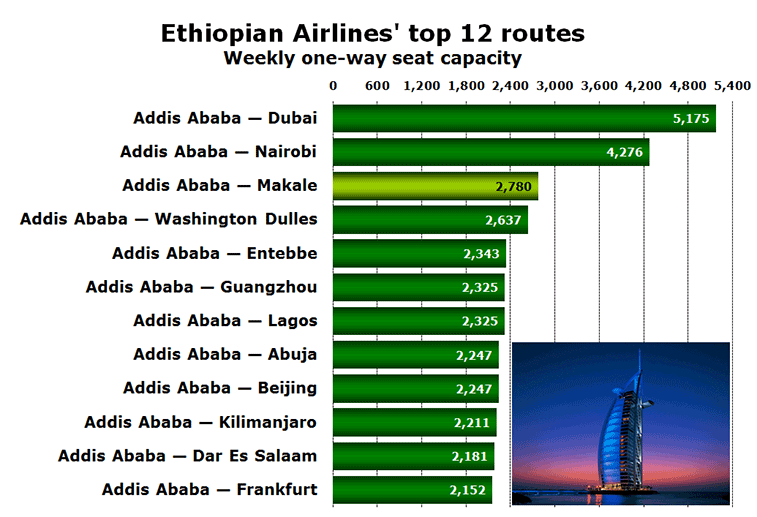 Ethiopian Airlines’ weekly seat capacity posted 15% growth this September, with 10 of the top dozen airport pairs growing, while the 3,467-kilometre sector to Abuja as well as the 8,336-kilometre link to Beijing saw their operations unchanged. The link to the capital city of Kenya — Nairobi, is the fastest growing route, having increased by 66% or 1,705 weekly seats in the past 12 months. This comes as a result of the airline having increased its frequency from twice-daily to four times daily on the 1,157-kilometre airport pair. On 24 May, Ethiopian Airlines celebrated the inaugural flight from Addis Ababa to Kano, the airline’s fourth destination in Nigeria. The 3,330-kilometre sector is operated four times weekly via Enugu.