Second 2014 victory for this week’s ‘Arch of Triumph’ winner 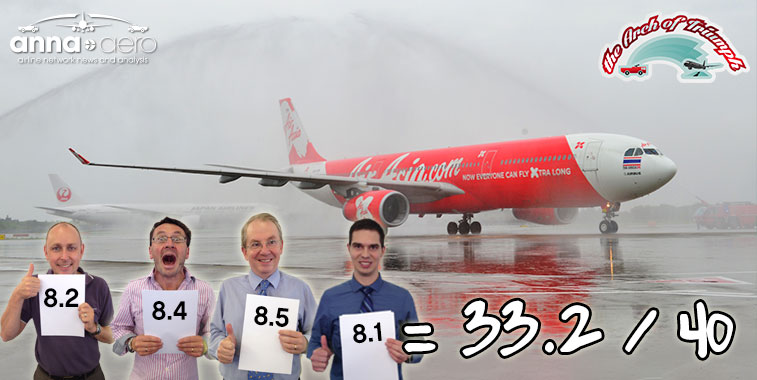 Last month, Tokyo Narita won its first ‘Arch of Triumph’ when it welcomed Spring Airlines Japan to the airport. However, with a score of just 22.8, the airport failed to make a dent on the leader board, languishing in third from bottom spot of all 29 previous winners in 2014. This week it scored more points, but still hasn’t made the top 10.

This week, Tokyo Narita became only the second airport of 2014 to secure two ‘Arch of Triumph’ wins, joining the UK’s Cambridge Airport with this prestigious accolade. Despite improving its winning score by 10.4 points this week (up from 22.8 to 33.2), Tokyo Narita is not represented on the top 10 leader board, joining Budapest in equal 11th. The win also gives the Asian region some clear water between itself in second place (with six wins) and the Middle East and North American regions (both with two wins) in the inter-regional battle for #2 spot — the title being effectively already Europe’s with 20 wins out of 30 so far in 2014. Keep monitoring!! 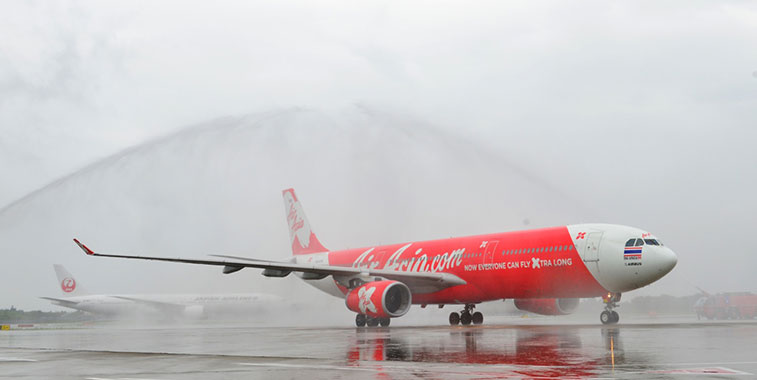 The firefighters from Narita go the Xtra yard (roughly equivalent to a metre for our European cousins) to deliver this FTWA.

Judge’s comments: This is the third FTWA entry of 2014 for Tokyo Narita Airport – having lost out to the InterSky FTWA at Dresden in May, and securing a cheeky ‘Arch of Triumph’ win in August in what was a quiet week (just three entries) – and this is the Japanese hub’s best offering thus far. Not a world-beater by any means, but a good improvement on previously notched up scores of 18.6 and 22.8, and a worthy weekly winner. 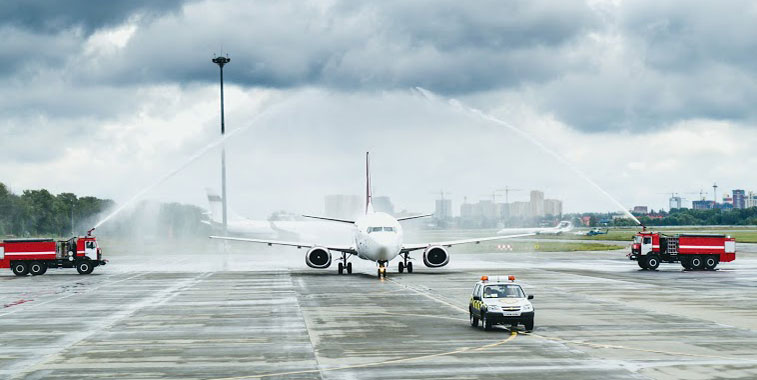 Perhaps an FTWA in the ‘St. George’s Cross’ style would have been better for this route launch from Georgia.

Judge’s comments:  All of the anna.aero judges were excited to see whether the Kiev Zhulyany Airport firefighters would be able to deliver a rare ‘St. George’s Cross’ style FTWA for the arrival of the thrice-weekly flyvista service from Tbilisi – the capital of Georgia. Instead, they played it safe, with this sound effort on the classic arch formation, rather than accepting the tough task of trying to recreate a difficult local FTWA style rarely seen outside of the Caucasus. 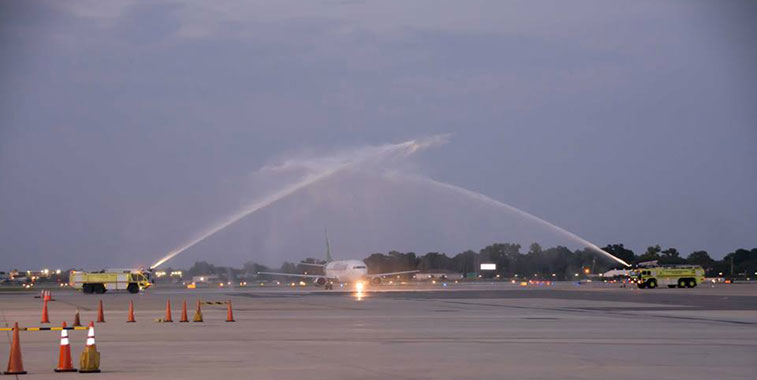 Express delivery on an FTWA was the order of the day in New Orleans.

Judge’s comments:  At least the traffic cones were excited to see the arrival of the new PEOPLExpress service from Newport News in New Orleans. Maybe they are all big fans of Mike Morisi — as we are — who will have undoubtedly been on board this inaugural flight. 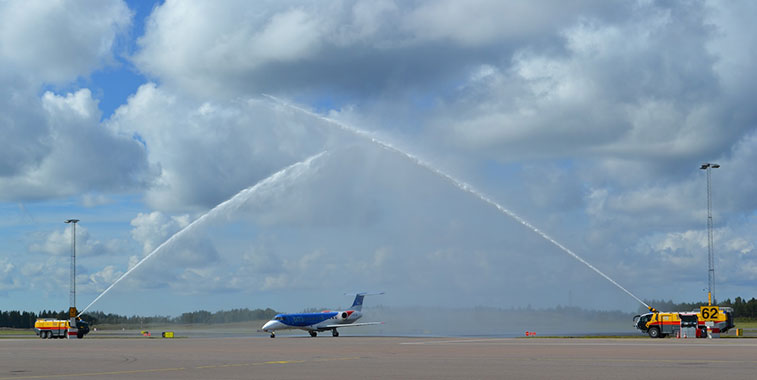 Clearly the Gothenburg firefighters were expecting something a little bigger on the new bmi regional route.

Judge’s comments: Sometimes a clear message just doesn’t get through from the airport’s marketing team to the lads and lasses down at the fire station. The firefighters at Gothenburg clearly were expecting the launch of a new daily service from Etihad with A330s when they were training for this event…as their FTWA is literally dwarfing the tiny bmi regional 37-seat ERJ 135 which toddled in on the new domestic route from Kalmar. 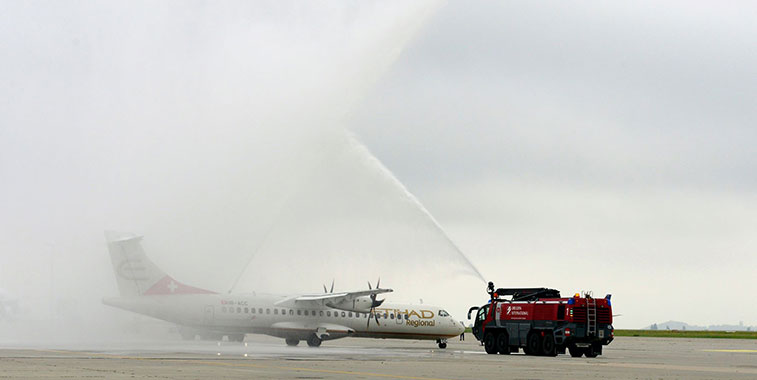 Three water arches in one day at Dresden – a world first for the German airport.

Judge’s comments: 1 September was a busy day in the Dresden Airport fire station…but for all the right reasons. That day the airport had three new route launches, all of which were celebrated by FTWAs – the first time that an airport anywhere in the world has delivered this mighty airport marketing feat. While the FTWAs were not world-beaters by any means, clearly the fire crews were getting the hang of it by the third one… 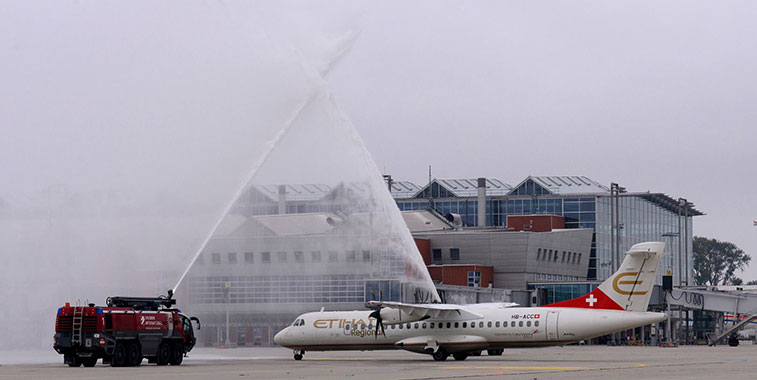 A homage to Swiss chocolate for a new Swiss route – and the second of the day in Dresden.

Judge’s comments: The only time it is ‘acceptable’ for an airport fire service to deliver an FTWA in the ‘Tobleroning’ style is when you have a new Swiss route to launch (Etihad Regional’s new daily service to Zurich) – and clearly this is what has happened here. However, in terms of scores, this type of FTWA also only delivers an ‘acceptable’ tally…or else our competition would have to be renamed ‘Chocolate Mountain of Triumph’ – which doesn’t really sound right (although tasty). Interestingly, the only time Dresden has won the weekly ‘Arch of Triumph’ — back in May this year — was also for the launch of services to Zurich…but with InterSky. This week’s score of 27.6 was however marginally higher than the 27.1 scored earlier this year. 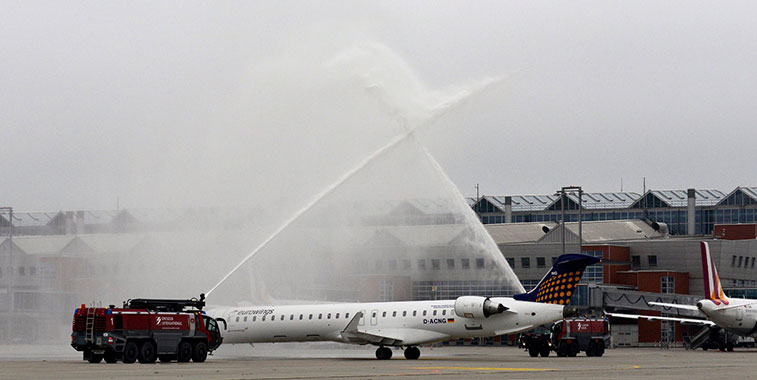 FTWA #3 of the day at Dresden…the best of the bunch from the German airport.

Judge’s comments: Domestic routes often get overlooked in airport marketing terms as being a bit dull…but not in Dresden who were determined to give the new 11 times weekly service from Hamburg a good celebratory drenching. While this final offering of the day was the best of the three delivered on 1 September by the airport, it was not enough to secure the weekly win.