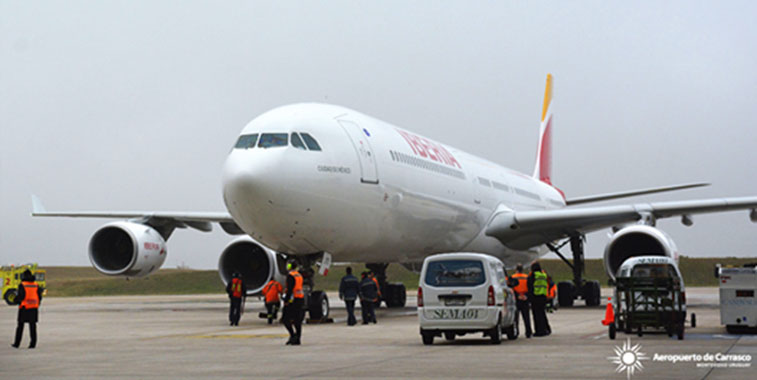 Following the victories against England (2-1) and Italy (1-0), Uruguay managed to qualify for the second stage of the 2014 FIFA World Cup, where they lost 0-2 against Colombia. With an estimated population of 3.3 million (compared to 47 million in Colombia), Uruguay’s civil aviation activities are also correspondingly less high profile than its South American neighbour. According to Innovata schedule data for this September, the country currently has two commercial airports providing scheduled airline services, namely Montevideo Airport and Punta del Este Airport, which have decreased their combined annual passengers by 17% since anna.aero last looked at this country market two years ago. Montevideo, perhaps better known as Carrasco International Airport, has an impressive modern terminal building (capable of handling 3.5 million annual passengers), opened in December 2009, after being designed by the internationally famous award-winning Uruguayan architect — Rafael Viñoly.

Analysis of data facilitated by the two airports reveals that Uruguay’s airports handled around 1.7 million passengers last year, representing a decrease of 14% when compared to 2012 figures. In fact, the collapse of the national flag carrier in 2012 — Pluna — left Montevideo in a difficult position. Established in 1936, the wholly government-owned carrier accounted for over 55% of all scheduled traffic at the airport and offered flights to 12 destinations across South America, including seven in Brazil, three in Argentina and one each in Chile and Paraguay. 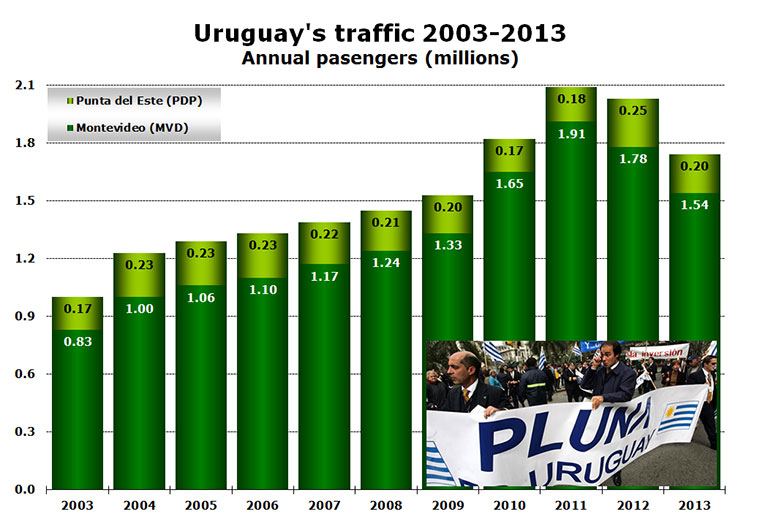 Looking at passenger data between 2003 and 2013, the combined traffic of the two Uruguayan airports grew by an average annual growth rate (CAGR) of 5.2%, with Montevideo almost doubling its traffic during this timeframe and peaking in 2011 at 1.9 million passengers. Overall, Uruguay’s traffic has visibly accelerated until Pluna suspended operations, achieving a massive increase of around 110% in 2011, when compared to 2003. Also noteworthy is the fact that even in the worst year of the global economic recession, Uruguayan traffic continued to grow, recording in 2009 a yearly increase of 5.5% when compared to the previous year.

As of September 2014, Uruguay is served by a total of 11 airlines, with Aerolineas Argentinas still being the dominant player in this country market, as it commands 23% and 32% of weekly seats and flights respectively. It was also the main beneficiary of Pluna’s demise, which carried four million passengers in 2013, operating a total of three airport pairs from Uruguay. Therefore, Buenos Aires Aeroparque is the SkyTeam member’s most served destination with a combined 50 weekly flights from Montevideo and Punta del Este, while the airline’s third route is operated daily from Montevideo to Buenos Aires’ primary airport at Ezeiza. 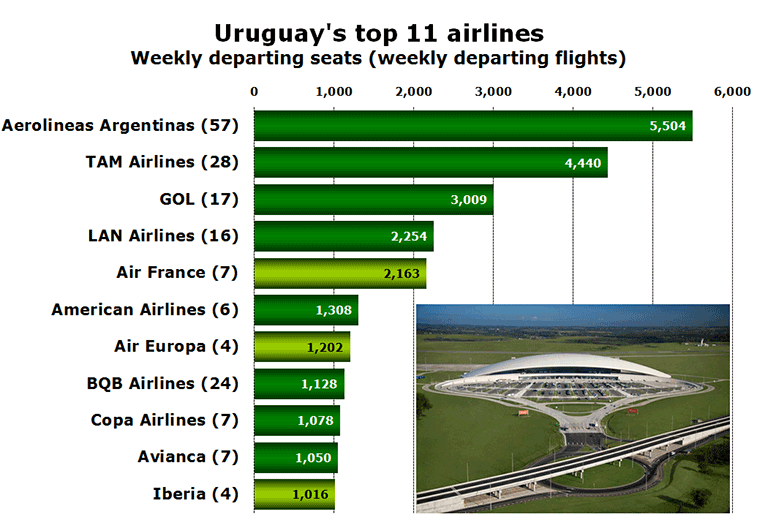 Total weekly seat capacity in Uruguay has gone up 0.5%, with seven of the top 11 airlines recording growth, when comparing data from this September with the same week last year. Air France is the fastest growing operator, increasing its weekly seat capacity by 618 seats or 40% over the last 12 months. The French flag carrier has added two further weekly flights on the 11,303-kilometre sector from Paris CDG to Montevideo (operated via Buenos Aires Ezeiza), up to daily. On the other hand, the unofficial flag carrier of Uruguay — BQB Airlines — experienced the greatest capacity decline (-67%), due to dropping a total of seven routes, including three from Montevideo, one from Punta del Este and two from Salto (another Uruguayan airport that offers no commercial operations as of September 2014).

Furthermore, on 1 September, Montevideo has seen the return of Iberia, with four weekly flights from Madrid, and the departure of SOL Airlines and TACA Airlines, with the latter having seen its operations and network being absorbed by Avianca. Overall, three of the 11 carriers serving this country market, are European airlines (all highlighted in bright green), with Air Europa being the third operator to connect Europe to Uruguay since 3 June 2013.

A total of eight countries can be reached non-stop from Uruguay according to Innovata schedule data for this September. At around 8,300 weekly seats and 8.5% fewer than in the corresponding week last year, neighbouring Argentina tops the list of country markets served, with a combined total of 78 weekly flights operated by BQB, Aerolineas Argentinas and Air France from Montevideo and Punta del Este. 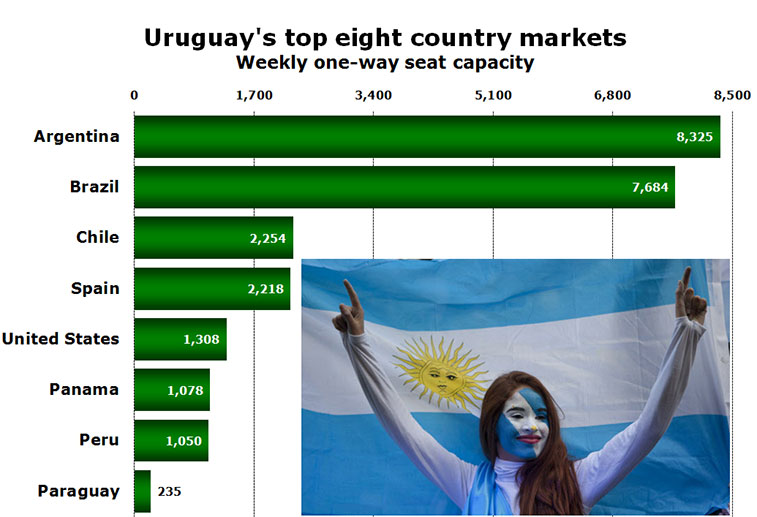 Besides Spain, that has seen a net growth of 1,321 weekly seats due to the arrival of Iberia and Air Europa’s additional weekly departure, Chile, as well as Panama, are the only country markets that have posted capacity growth this month, 14% and 6.5% respectively. By comparison, operations to Paraguay noted a decline of around 42% in weekly capacity, as a result of BQB dropping the 1,073-kilometre sector from Salto to Asuncion.