Aer Lingus raced down Budapest Airport’s Runway 13R-31L on Saturday to take the title of “Fastest Airline in the World”, beating other airlines, airports, and aviation enterprises from all over the world in the air transport industry’s annual charity race, “bud:runway run” organised by a multi-talented coalition consisting of host Budapest Airport, Nike, Wizz Air, and anna.aero, in aid of a pool of child cancer charities, and other child-focussed good causes. Team Aer Lingus was captained by Stephen Kavanagh (left) the airline’s Chief Strategy and Planning Officer. Commenting on the win Christoph Müller, Aer Lingus CEO said: “The triumph of Aer Lingus in Budapest epitomises the can-do spirit of the people who work for this great community-spirited airline and who are proud to represent us every day as we greet ever-growing numbers of customers to whom we are not only one of Europe’s most punctual airlines, but also now the undisputed Fastest Airline in the World.” The unique experience of running on Budapest Airport’s Runway 13R-31L. You can’t do this at any other major airport in Europe. (And, with +7% growth this year, how much longer will it be possible at Budapest?) Teams and individual runners included a seriously competitive entry fielded by Qatar Airways. In the race Qatar’s Business Finance Officer, Hamish Ho, would spread his wing-like arms out in order to reduce down-force, although the poor drag qualities of the official shirt had not been calculated in wind tunnel tests. 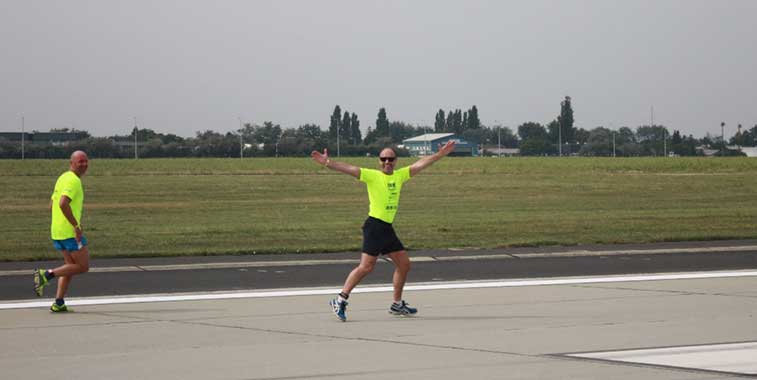 Ryanair’s new Chief Marketing Officer, Kenny Jacobs, architect of the airline’s corporate image makeover, does star-jumps along the Tarmac taking him to an impressive 59:40. Wizz Air CEO, József Váradi, is momentarily distracted by one of his own aircraft parked mid-runway, and is overtaken by Budapest Airport CCO, Kam Jandu. Team Budapest Airport was captained by CEO Jost Lammers. 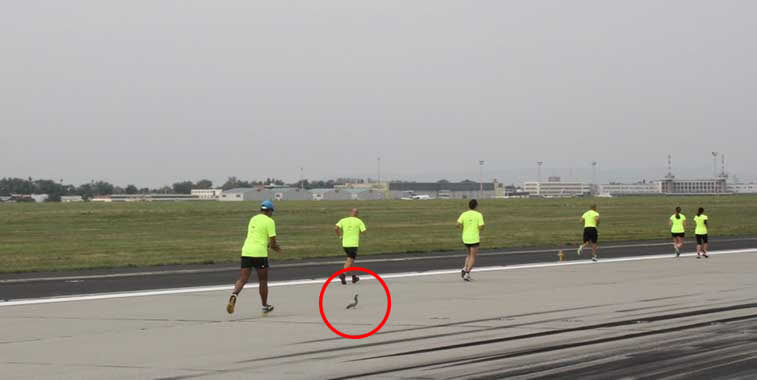 Team anna.aero included the entry of the publisher’s daughter – Queenie B. Hogan – who was placed as the 9th fastest woman, a significant achievement for an 11 month old. The airport competitors: Jesper Klausholm (right) Marketing Coordinator, Billund Airport and the “Magnificent Seven” Team Ljubljana. Ultimately it would be left to Artur Staniszewski, Airline Relations Specialist, Krakow Airport to hoist the prize for the “Fastest Airport in the World”. Krakow beat several other spirited hopeful airports from across Europe, including a major challenge from Bologna and Aéroports de Paris. 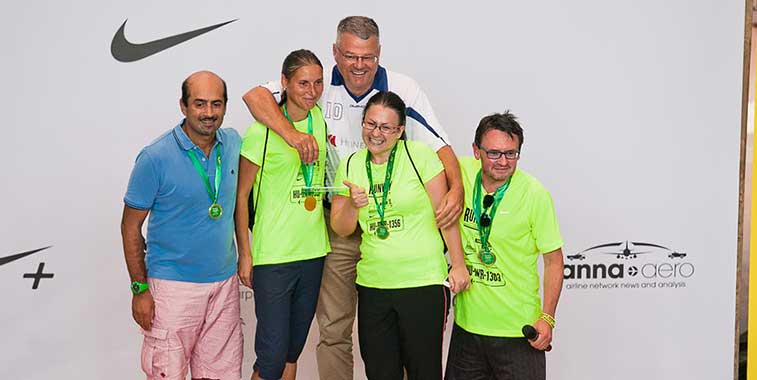 The fastest runner accepts his prize from Wizz Air CEO József Váradi. In an astonishing ‘double’ Robert Murphy, an Aer Lingus Fleet Cost Manager, also led from the start, crossing the line in overall first place to take the prize of “Fastest Aviator”, beating all other 609 competitors over the 12 km course – four lengths of the Budapest runway – in a blistering time of 41:26. Aer Lingus sealed its victory by fielding two teams of four runners. 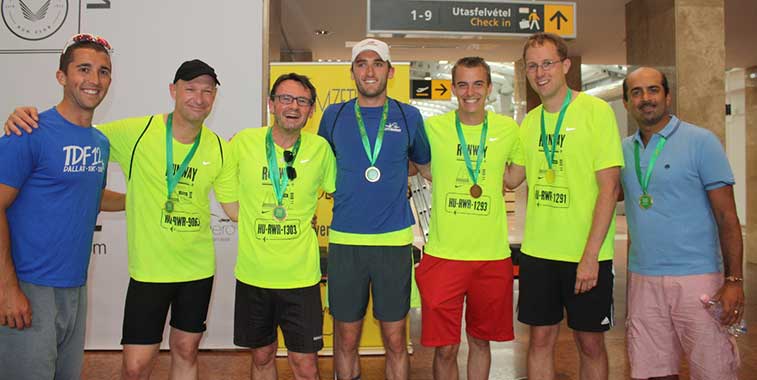 The world’s biggest low cost carrier, Southwest Airlines….came in an impressive second place! We commend our friends from Southwest’s revenue management department: Brian Wellman, Eric Walters, Paul Zigler, and Doug Buehring for being great sportsmen on many levels – and for travelling all the way from Dallas. “It’s been a blast” said Wellman. 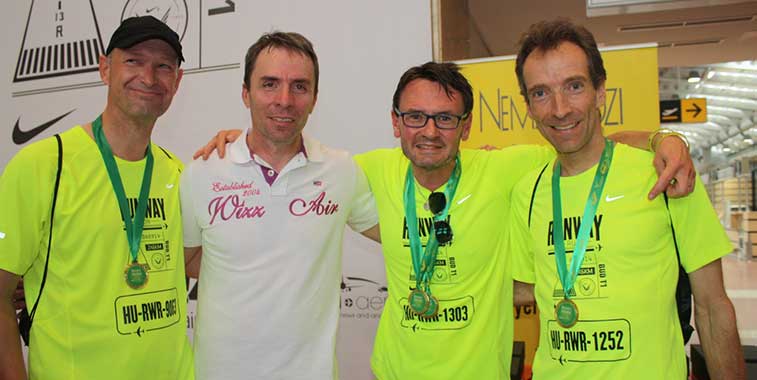 Skywest Airlines’ Rob Leatham (far right) flew in all the way from Los Angeles and carried on flying all the way down the Budapest runway to take a hugely impressive overall fifth place. He is congratulated here by Budapest Airport CEO, Jost Lammers, Wizz Air CEO József Váradi, and anna.aero publisher, Paul Hogan. All finishers were awarded the “Bron’s Medal” in memory of anna.aero publisher’s 12-year-old daughter, Brontë “Bron” Hogan, who passed away in 2011 after a five-year battle with leukaemia. The bone marrow transplant charity, Anthony Nolan, which arranged two bone marrow swaps for Brontë, was one of the benefiting institutions. We sign off here with the words of Aer Lingus’ Stephen Kavanagh, captain of the Fastest Airline in The World: “On behalf of the team, thank you again for a wonderful event and a medal to treasure.”

Follow the link below to see all the official photographs from “bud:runway run”:
http://mandiemese.hu/letoltesdownloads

You can have a quick look at the photos here:
http://mandiemese.hu/budrunwayrun2014

Personal note of appreciation. anna.aero would like to thank our Budapest Airport friends for this highly successful cooperation especially Kam Jandu and his team: Andrea Trencsén, Niki Huszák, László Kurucz. We are also indebted to Mihály Hardy for his highly efficient coordination and inexhaustible supply of images. It’s a pleasure working with you all.