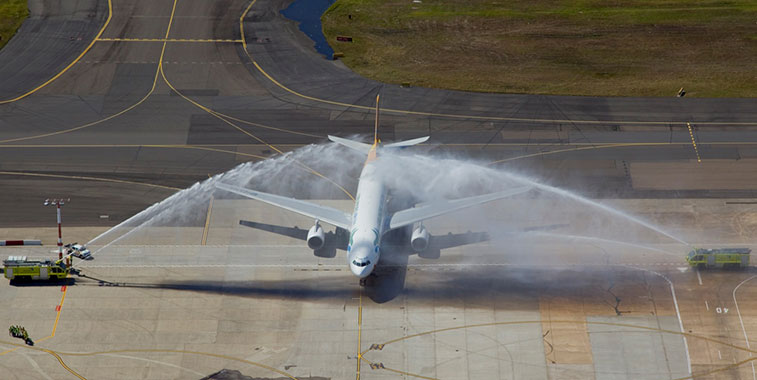 Welcome to Sydney! Cebu Pacific Air’s arrival in Sydney on 9 September was greeted with the traditional water arch salute. At over 6,200 kilometres the airline’s first route to Australia is its third longest after Kuwait (7,612 kilometres) and Dubai (6,915 kilometres). (Photo: Seth Jaworski)

Cebu Pacific Air has now firmly established itself as the leading airline in the Philippine domestic market, transporting well over 50% o­f all domestic air passengers. The airline first began operations in 1996 following deregulation of the Philippine domestic air market. The airline has since launched not only regional international flights, but also long-haul international flights. Since the beginning of September it has started new long-haul services to Kuwait (2 September) and Sydney (9 September). At the end of June, the airline’s fleet had reached 50 aircraft; 38 A320 series aircraft, eight ATR 72-500s, and four A330s. Since then a fifth A330 has joined the fleet. Another A330 will join the fleet in 2015 after which growth will be driven by an increase in Airbus narrowbody aircraft. 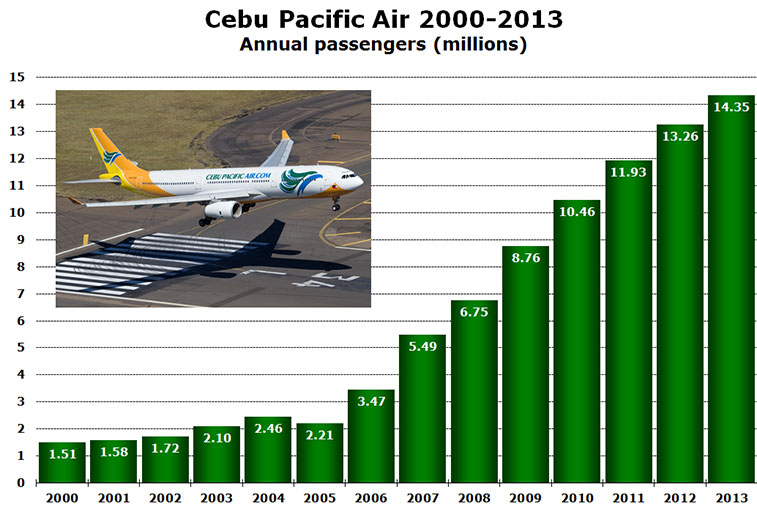 At the beginning of 2014, Cebu Pacific acquired Tigerair Philippines (IATA code DG). Although the airline currently still operates under the Tigerair brand it will eventually be absorbed into Cebu Pacific’s network. This page from Cebu Pacific Air’s most recent investor presentation (August 2014) is a neat summary of its position in the Philippine domestic market. Even without the acquisition of Tigerair Philippines, Cebu Pacific has been growing its share of the market, primarily at the expense of Philippine Airlines. The airline’s most recent domestic route addition is from Cebu to Tandag which launched on 30 June.

In terms of regional services Cebu Pacific had a 16.5% share of the market in the first quarter of 2014 according to Civil Aeronautics Board statistics, still trailing Philippine Airlines Group who had a 28.2% share of the market. As of the end of June, Cebu Pacific (including Tigerair Philippines) operated over 420 weekly flights on 37 regional routes across 27 destinations, with Hong Kong, Singapore and South Korea the airline’s key markets. 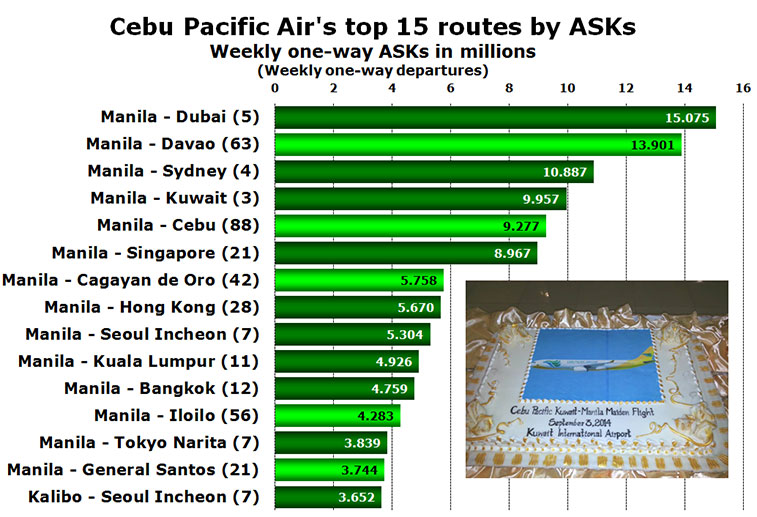 The airline’s biggest route in terms of ASKs is its service to Dubai, which launched last October, and was the airline’s first long-haul service. The route is currently served with five weekly flights and faces competition from Emirates’ thrice-daily flights as well as daily flights from Philippine Airlines operated on its behalf by PAL Express using A330-300s.